Its time to pull the trigger.

We pull the trigger every day.

Shooting ourselves in the foot.
Likes: VOL_Lyfe and UTwild82
C

Sad_vol said:
Heard reports the jets are going after Mullen. We need to wrap up investigation to get infront of Florida in the coaching hire instead of going after leftovers.
Click to expand...
We won't, they'll announce Freeze before Mullen is announced as leaving

BisonVol said:
Meddling for one, but I'll throw that aside for the moment. Aside from Kentucky and Vandy, SEC AD's are judged primarily on the success of their football programs/football coaching hires. Fulmer hired this train wreck of a head coach and gave said said head coach an unearned raise and extension during a global pandemic.

I don't blame Fulmer for the hire. He was thrust into a tough position after the Haslams and John Currie jacked up the 2017 coaching search. I give him a pass for that. The second he gave Pruitt the raise and extension, though, he attached himself to Pruitt IMO
Click to expand...
Well stated, and bears repeating. I can't imagine any decent reason Fulmer gave that raise and extension to Pruitt...

Eastknox865 said:
I would like to know what Fulmer has done wrong excluding anything about Pruitt
Click to expand...
Some on this board suffer from the opposite of Stockholm syndrome. Instead of hating their oppressors they hate the best coach the school’s ever had in the modern era. 151-52-1 2 sec championships, and a National championship.
Likes: plumbervol, Eastknox865 and VolNExile 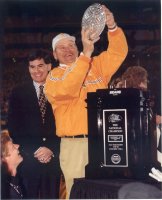