Gadsden Flag (“Don’t Tread on Me”)

Vols to the Wall

It’s one of my many tattoos. But I got the inspiration from the version the USA men’s soccer team used seeing as I’m a soccer junkie. There’s a soccer ball behind the snake.

Wasn’t attempting to rile anyone up. There’s nothing incendiary in my post, no gnashing of teeth. Go re-read what I said. Nothing about the EEOC’s non ruling.

Was just asking for opinion on the flag / symbol itself.
Click to expand...
I think a 10th Florida player was banned from playing next season.

Interesting stuff... these days, I tend to stay away from drawing attention... don't like to wear shirts or hats that could lead to issues with some idiots out in the public.

That being said... I never leave the house to run errands without my I served-VietNam hat... have several, and wear them with pride. Pretty sure I would get my azz kicked in real deal, but I know I would be hell for 2 minutes.

So... I really think some of the hats and shirts and logos representing our history are going to create big time issues with the libbies, socailists, and commies... but I do admire those who stand up for this county and hope they can go more than 2 minutes. Me... I am going to get back at em at the voting booth.
Likes: TN-POSSUM, malinoisvol, 615vols and 2 others

All of a sudden if some mouth breathing idiot white supremacist sympathizer ever wears, or eats or whatever’s something it’s automatically racist. So I’m not gonna subscribe to letting people decide what’s racist for me just because Billy Joe Slap Nuts is a racist idiot and decided to wear a “Join or Die” “Gadsden Flag” or “Betsy RossFlag” t shirt and decided to pick up a Bojangles tailgate pack for his Klan meeting.

They don’t automatically gain ownership of a symbol or brand because a dozen idiots had it during their idiot march and it offended a couple of overly sensitive losers who are looking to be a victim.

On the other hand, wouldn’t it be funny to see white supremacists hanging out at Starbucks on their MacBooks, maybe hitting up the new fancy Asian fusion place and getting their vegan burger patty’s at Whole Foods while listening to Old Town on their Beats or AirPods. I bet a lot of stuff wouldn’t be racist then.
Likes: TN-POSSUM and 37L1

85SugarVol said:
Is it offensive? Is it Racist?

View attachment 213284
Click to expand...
It's not racist. It pre-dates the American flag. The first Navy Jack is still flown aboard US Navy ships. 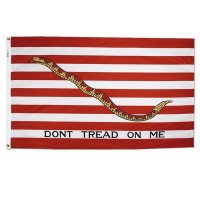 I wore this shirt to the local 4th of July parade and festivities. 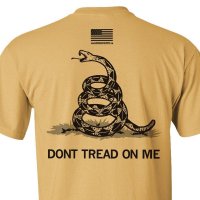 Proceeds Benefit: The Sycamore Shoals State park in Elizabethton, Tennessee including, but not limited to, assisting in the development, maintenance, and presentation of the park’s grounds and structures.
Likes: ajvol01

Pepe_Silvia said:
Not at all racist but it is incredibly cliche at this point.
Click to expand...
The original meaning was that like a rattlesnake, the US only strikes when threatened.

But in today's world, where the US engages in war just for the sport of it, some clowns would call that isolationism.

I wish this country was much more like that rattlesnake.
Likes: ajvol01, Pepe_Silvia and McDad

TheDeeble said:
It wasn't as popular 15 years ago. I had it as my avatar on a different forum back in 2003.

Remy said:
I grew up in Middle Tennessee during Jim Crow. I recall the separate water coolers, restrooms, and even the YMCA in Nashville with the "Colored" YMCA entrance below to the basement. I recall racists and racism being prevalent, my family never knew anyone who was in the Klan, but we did know they were around us. Use of the "n" word was just part of daily conversations. Trying to set the stage for the following, never did I once hear or understand at any time by all the racists and white supremacists of the day around me during childhood one of them mention or even suggest there was a racist connotation to the Betsey Ross or Gadsden flags. It's purely a recent contrivance by somebody and neither flag has anything to do with racism.
Click to expand...
This country is just far too fixated with "flags" and symbolism instead of real issues. We have a tendency to create drama out of nothing.
Last edited: Jul 22, 2019
Likes: LouderVol, MercyPercy, DEFENDTHISHOUSE and 1 other person

Cdywolfe said:
I’ve always thought the license plates were exceptionally cute. They costs twice as much. So basically your gonna get double treaded on in order to display how much you’re not gonna get treaded on.
Click to expand...
Right wing virtue signalling at its best.
Likes: MercyPercy, DEFENDTHISHOUSE and Pepe_Silvia

NEVolFan said:
Interesting stuff... these days, I tend to stay away from drawing attention... don't like to wear shirts or hats that could lead to issues with some idiots out in the public.

That being said... I never leave the house to run errands without my I served-VietNam hat... have several, and wear them with pride. Pretty sure I would get my azz kicked in real deal, but I know I would be hell for 2 minutes.

So... I really think some of the hats and shirts and logos representing our history are going to create big time issues with the libbies, socailists, and commies... but I do admire those who stand up for this county and hope they can go more than 2 minutes. Me... I am going to get back at em at the voting booth.
Click to expand...
With all due respect, but you may as well exchange ass-kickings on the street. That is probably going to do you more good than voting.

Its racist if you want it to be, especially if you are a democrat where anything can be racist so you can virtue signal.
Likes: RDU VOL#14

BigOrangeD said:
Amen Brother. During the Revolution our side carried it on the battlefield telling England to F Off
Click to expand...
The American Revolution was racist.

lawgator1 said:
Thank you for posting this as it is an EXCELLENT example of misleading right wing nonsense amongst bloggers, taking on the imprimatur of "news" or "fact."

The article claims that in 2016 the EEOC ruled that the flag could be viewed as "racial harassment in the workplace" because it could "convey racially-tinged messages" in some contexts.

Cue the right wing nutjobs losing their collective sh!t because they think the EEOC actually proclaimed that. Let's take a look at how this happened.

1) OP, the article you posted is on Yahoo in the Style section. That should have been the first clue to you that you were being taken for a ride.

2) The article in turn is from some site entitled "she knows," which bills itself as a website for women discussing things like cooking and beauty tips. So that's tip # 2 that maybe the "outrage" component of this is being ginned up, maybe just a tad.

3) So then we look at who did the linking. It is not surprisingly on Fox News in an opinion piece which, gasp, expresses much feigned outrage. Same thing on Townhall and presumably reverberating throughout the right wing blogosphere based on just a simple Google search.

So is it true that in some case the EEOC actually ruled that the "don't tread on me" flag is racist, or even could be racist, as suggested by the article?

ABSOLUTELY THE f*** NOT.

The EEOC has a page about this, and here it is: What You Should Know about EEOC and Shelton D. v. U.S. Postal Service (Gadsden Flag case)

For those too lazy to bother to read it -- which is evidently the entire right wing echo chamber that posts and reposts crap like this to rile up their idiotic base-- here is the bottom line:

The EEOC goes on to specifically note that no determination was ever made as to racial component. The issue was just one of procedure having to do with an employee complaint.

No, Virginia, the EEOC has not ruled that the flag is racist, or even could be racist. So damn you to ignorant hell, all that bought into the notion that this is legit. Its another fake outrage piece, championed by the usual morons. Sadly, there will be many ignorant folks like yourselves wallowing in junk like this for a long time.
Click to expand...
In all fairness, the Right has to do stuff like this to counter balance all the BS from the Left.

85SugarVol said:
Is it offensive? Is it Racist?

n_huffhines said:
But they're not all over Chris Pratt. This is a fake news story. Yahoo took a handful of tweets and created a clickbait story pretending like this was some big controversy. This happens all the time and we begin to think the miniscule minority of a group represents the majority.

Was Chris Pratt Criticized for a 'White Supremacist' T-shirt? Not Really
Click to expand...

utvolpj said:
It's just that your thread was started with a fake news story. From a couple days ago
Click to expand...
Beat me to it