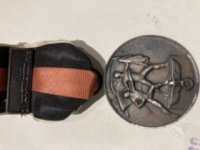 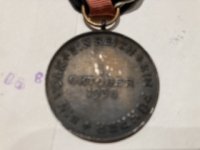 Souvenir from the European theatre. Any idea what this is? “One people. One reich. One Fuhrer.” 1 October 1938
Likes: malinoisvol

Pick up your balls and load up your cannon

Tin Man said:
Moving my father’s stuff, I came across this.
View attachment 351764
@malinoisvol @OneManGang
Do you recognize the ones we haven’t already discussed?
Click to expand...
@Tin Man Some of those bottom ribbons look like old CAP cadet ribbons.
http://www.capchistoryproject.org/cadet-ribbons2.html
Likes: Tin Man

3rdDegreeVol said:
@Tin Man Some of those bottom ribbons look like old CAP cadet ribbons.
http://www.capchistoryproject.org/cadet-ribbons2.html
Click to expand...
Thanks! My father participated in the Civil Air Patrol during post-was years. I believe he received credit for the hours towards his reserve commitment. I tagged along for many of these excursions to small airfields. Dad would give me a dime for a Dr. Pepper or orange Nehi from the soda pop machines.
Likes: 3rdDegreeVol

In 1984, Dave was nationally syndicated and covering the LA Olympics. He wrote an article that was a petulant tirade about Mary Lou Retton being denied a childhood by the rigors of training for the Olympics. I fired off a response. In an ensuing article that was his mea culpa, he quoted me, saying that I best stated the summation of many replies he had received.

Everybody chooses how to spend their retirement, Dave. You’re not creepy. You’re a sports writer, covering an underserved beat. Keep on scribbling.
New posts
You must log in or register to reply here.
<< The Pub Forum
Share: Facebook Twitter Email Link