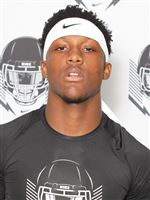 i liked it. I loved it up there. I liked it better than any other college, said williams, whos expected to be one of the top prospects from louisiana in the 2020 class. ive been to some other colleges, too. I went to lsu. I went to tulane. I went to a few more. But tennessees the best one i saw yet.

williams said he liked a lot about tennessee, too. ive never seen a facility look like that, he said. "ive never seen a coaching staff so helpful. he said he didnt talk about when he might make the trip to tennessee again, but he would like to, for sure.
Click to expand...
-247
Likes: tbones0711, VolForLife83, gainesvol82 and 6 others

Has the LSU offer. I'd say that's a done deal.

benholt06 said:
Has the LSU offer. I'd say that's a done deal.
Click to expand...
If we didn't have Pruitt, Chaney, Tee, and Nieds, I'd agree with you. However...
Likes: drvenner, titansvolsfaninga, SugarCC and 1 other person

ChismsHeadband said:
If we didn't have Pruitt, Chaney, Tee, and Nieds, I'd agree with you. However...
Click to expand...
David Johnson too. He’s obviously got ties to the area.
Likes: ChismsHeadband and SugarCC

85SugarVol said:
David Johnson too. He’s obviously got ties to the area.
Click to expand...
Yes. Johnson is supposedly a strong recruiter in that region. We'll see I guess

Click to expand...
I hope Tennessee can land him but it's really hard to recruit players that LSU wants in Louisiana

Tennesseefan2019 said:
I hope Tennessee can land him but it's really hard to recruit players that LSU wants in Louisiana
Click to expand...
Razor sharp insight
Likes: LibertyVol, LoudOrange, MadWorld and 2 others

but that sweatshirt tho.
Likes: FïreBall

Big Gucci Sosa said:
Click to expand...
I thought you attended camps to getting your rating bumped, not dropped. Going to be hard to do if rivals thinks you might like the Vols.
Likes: BucksnortVol and Riverratvolfan

FIRST TAKE: SAM SPIEGELMAN, TEXAS & LOUISIANA RECRUITING ANALYST
“I legitimately think Tennessee is a player, but Joel is doing a good job of keeping a lot of schools in the fold. In addition to Tennessee, Florida, Georgia, Texas A&M and LSU are all in the picture among others. Even though he’s a Baton Rouge kid, he’s eyeing plenty of out-of-state schools and he’s taking the time to visit all of them and keep in touch with all of them. While LSU is a legitimate player, they’re on an even playing field with those other schools including Tennessee and it wouldn’t surprise me to see him playing football outside of Louisiana next year.”

SECOND TAKE: MIKE FARRELL, NATIONAL RECRUITING DIRECTOR
“Tennessee could get him. Not every kid is going to stay home. It’s tough to beat LSU for those home-state kids if they want them, so it depends on how much love LSU and some other programs show him. Right now, Tennessee is recruiting him the hardest and sometimes that trumps anything geographically. I wouldn’t count LSU out just because he wore a Tennessee hoodie to a camp, but I also wouldn’t say Tennessee could be counted out, especially if they keep recruiting him this hard.”
Click to expand...
Rivals
Likes: FïreBall, SugarCC, SweetasSoda and 2 others

Someone explain it to me please.
Likes: Bassmaster_Vol