Which 2 seed has it worst/hardest?

So I am curious because a lot of people seem to think we got screwed, but I see us as more of a middle of the road draw. Some also think we drew favorable.

In my opinion, Michigan does have it easiest up to Gonzaga in Anaheim which is going to be very hard.

UK/TENN have it hard in different ways, we are facing blue bloods and a bad location draw in the second round but easier S16 and E8 matchups.
UK is facing dark horses which may seem easier but Iowa State is a nightmare to play and UNC of course is a tough out.

Michigan State to me got the hardest draw both in the fact Duke awaits but also in that Louisville and Maryland are both very tough. LSU was tough, idk if that will hold up given the distractions but they are my pick.

In total, I would say the hardest brackets for 2s are :

Michigan State
TENN/UK (I would give the edge to UKs being harder actually, but I know I am in the minority)
Michigan

Post your rankings and rationale below! Oh and GBO!
Likes: Mtnvol80

Remember when folks thought we could compete with all the top schools and now we are worried about Cincy....lol

I guess thats what a 20 point beat down to a 5 seed at home (basically) will do that to ya.

The Oracle of Orange

I went with Michigan State, but Houston can beat Kentucky. Legitimately.
Likes: eroller1141@gmail, Stoked, TBvol and 1 other person

volgrad500 said:
I went with Michigan State, but Houston can beat Kentucky. Legitimately.
Click to expand...
Wofford has an awesome big man and the best 3 pt shooter in NCAA history. Iowa State is going to be my upset pick to win the region. 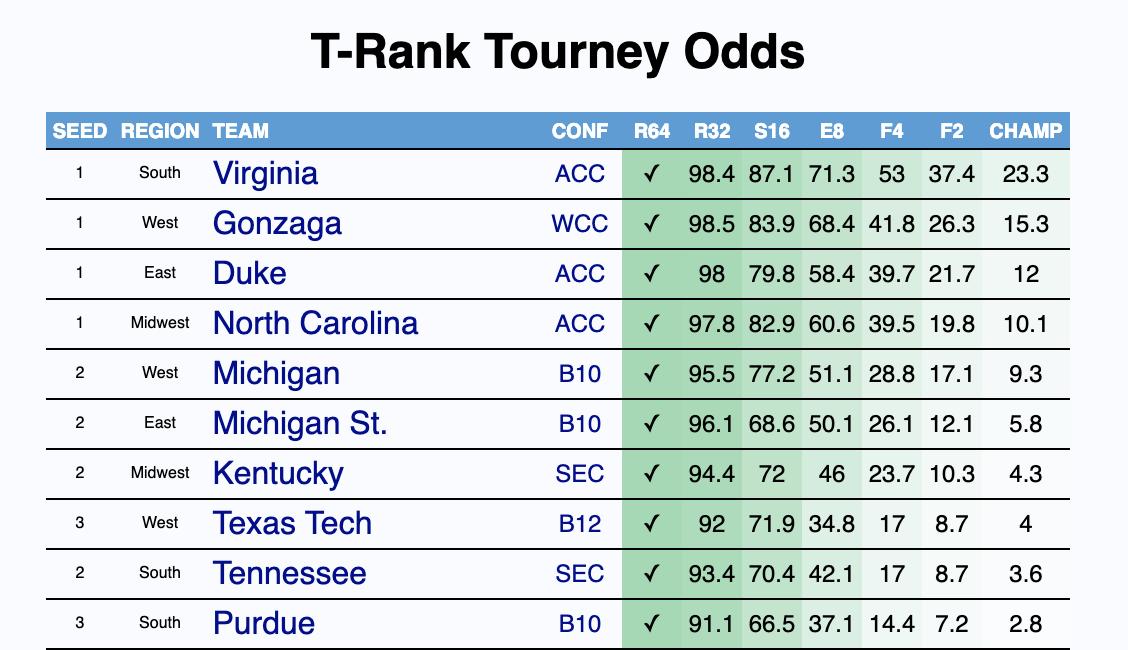 That's Cincy in the state of Ohio, though.
G

Michigan State got the worst and it isn’t close.
Likes: Mtnvol80, Kinger and zaqhhh

Sucks because Nova was my dark horse. Now I'm conflicted, but I think TN has the hardest road of the four 2 seeds to get to the E8.

Not that familiar with Cinci, only seen them play a couple times but they remind me of Ole Miss. Quick guards. I hate that matchup
J

Michigan State won regular season and tourney. And then got the last of the number 2 seeds...? That be crazy.

I think the question should be, who has the easiest 2 seed. I think Kentucky has the easiest path to the final 4!! We should win our corner of the bracket but, the elite 8, I don't know. Virginia is probably the most beatable for us of the 1 seeds. Go Big Orange!!

I think we got a good draw. Not saying we have an easy road; the tournament is always difficult, but I'd much rather be in Virginia's region than Duke or UNC's right now. And Michigan State definitely has the most difficult draw for a 2 seed.
Last edited: Mar 17, 2019

Am I crazy? I think it is Michigan by a large margin.
W

I think they’re all pretty well balanced, but I’m still wondering how Michigan St got the lowest 2 seed?? It was like the committee accidentally switched Michigan and Michigan State when submitting.

I think Mich has the toughest 3 seed and I think they will lose...... but really I know nothing (still my opinion).

I also think the UNC bracket is the toughest top to bottom.

The only real problem or complaint with Tennessee is where the second game would be...... but for me Purdue/Nova look easier than other 3 seed match ups.

But for me I think UNC.s top bracket may be tougher than KY’s bottom.
S

DiderotsGhost said:
I think we got a good draw. Not saying we have an easy road; the tournament is always difficult, but I'd much rather be in Virginia's region than Duke or UNC's right now. And Michigan State definitely has the most difficult draw for a 2 seed.
Click to expand...
Totally agree providing we don't see the UT of today anymore this year.
Likes: LadyinOrange and JoAllan

Cincinnati in the second round is a tough draw for Tennessee. Our boys had better be ready because that is a great basketball team.

Pretty good analysis at the end of this video. via @ESPN App http://es.pn/app

Well I had a dream I stood beneath an orange sky.

I'm not worried about Cincy unless we have to play KY the day before.
Likes: i2amavol, SolidRockGolf, LadyinOrange and 1 other person
New posts
You must log in or register to reply here.
<< Tennessee Vols Basketball Forum
Share: Facebook Twitter Email Link