Wouldn’t it have been awesome to have seen Barnett wear Reggie’s number to break the sack record? (No disrespect meant - there will never be another Reggie White.)

kyvol98 said:
Who wants to tell the families of Bill Nowling, Rudy Klarer, Willis Tucker and Clyde Fuson that their sacrifice in WWII didn't mean as much as some kids desire to wear their number?
Click to expand...
Those numbers should be totally off limits. No question about it.
Likes: gnm53108, mercuryvol, BucksnortVol and 2 others
S

No on the retired numbers.

Some players don't want their numbers retired.
I

Some of the retired numbers were for those Vols killed in WWII-I can't imagine "un-retiring" those, it goes against what Tennessee stands for. We could add numbers 0,00, 01,02, 03 etc., if we needed a few more (85), but please leave the Those killed in combat alone.
Likes: gnm53108, mercuryvol and BucksnortVol

peaygolf said:
The WW2 numbers should stay retired. All others should be open.
Click to expand...
Agree. We have had way too many legends that need to be honored but we only have so many jersey numbers to distribute. Players who lost their lives serving our country should absolutely have their jerseys retired but all others should be recycled.
Likes: gnm53108 and mercuryvol

Do you think there are players with retired jerseys that are so prideful that they would agree to let someone else wear it?
Likes: IndianaVol
F

mad4vols said:
I know this number isn’t retired but I would love to see a superstar QB wear #7 again at UT.
Seems like they mostly give it to defensive players lately.

#7 may be my all time #1 Vol. I met him when I was about 14 and I was amazed that I was bigger than him. He told me to concentrate on school and put sports second. He had me sized up in one second- and damned sure he was right! Conredge played with a Neyland-sized heart and the innate ability to make people miss, in an age where you could hit the QB on every play.
Click to expand...
Likes: mercuryvol and mad4vols

PhoenixAZVol said:
Do you think there are players with retired jerseys that are so prideful that they would agree to let someone else wear it?
Click to expand...
No - I think that's one thing that makes Tennessee greater than every other place. I can't think of a single player that came through here that if asked, wouldn't step aside in his or her personal glory for the betterment of the university...it's great to be a Tennessee Vol!!! 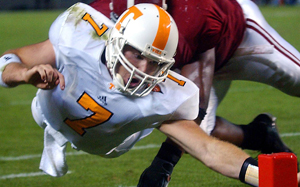 Click to expand...
So much fun watching the Ice Man.
Likes: gnm53108, YankeeVol, Frozevol and 1 other person

The Vets and some of the icons like White and Atkins need to be left alone IMO.

If Peyton wanted to give someone the chance go wear it, I'd leave it up to him.
Likes: sport3500
F

But I agree, if we ever have an elusive, fearless Vol with a heart of Inky.... give him #7!
Likes: GetYouSomeofThat

I think only the WWII players numbers should stay retired. For all others, their jersey (name with number) can be retired, but the number should be available to continue to be used.

Every generation has its heroes and recalling them fondly and comparing them to one another is part of being a fan. However, I think it was/is a nice, but unwise, gesture to retire numbers. There are many other ways to honor a player's greatness including displaying jerseys, a ring of honor, etc. But, there are, obviously, a limited supply of numbers to serve an unlimited and, hopefully, endless number of great persons and players who either have played in the past or who will play for the Vols in the future.

I think UT should use "special" numbers in Vols' history to reward active players of achievement. UT should elevate being asked to wear a certain number to a special honor for a current player who is achieving greatness. But I don't think any number needs to be retired. The history of the exceptional players who wore a particular number in the past should be celebrated making the current wearer part of a continuing history of achievement.

Finally, I don't think any unproven recruit should ever get to demand a number regardless of talent. If that is the reason they use to decide where to go to school, that says a lot about the person involved. They won't be missed. Go Vols!
Likes: IndianaVol
L

Leave the WW2 soldiers numbers alone. They paid the price in blood for us all. Imagine being a twenty year old kid fresh off the best years of your life, and then your in the biggest most destructive war in human history. They physically destroyed their lives for us. There's not many things I honor more than Tennessee football, but were it not for the sacrifices of those boys and millions more, God knows what the Germans or Japs could have done to us
Likes: I40flyer, gnm53108 and IndianaVol
New posts
You must log in or register to reply here.
<< Tennessee Vols Football Forum
Share: Facebook Twitter Email Link