It wasn't the wide open first half touchdown his awful defense gave up to Auburn ?

joevol33 said:
His speeches are getting dumber than Dooley. But at least he hasn't called us a bunch of scared Germans on D-day yet!😂
Click to expand...
But....That was the most accurate analogy I ever heard Dooley use.
Likes: tbh, unfrozencvmanvol, 08Vol and 2 others

BanditVol said:
But if we score a TD instead of giving one to them, we win by 1
Click to expand...
Probably not because Bailey wouldn't have gotten to play and drive for a TD.
Likes: 08Vol

Looking forward to JG starting every game next year. He'll give us the best chance to win!
Likes: JPL, FrankenVol54 and 08Vol
D

We can rage and be upset but he is who he is. Pruitt is clueless. The sooner he is gone the better
Likes: JPL, 08Vol and Big Al Orange

1 play results in 14 point swing. And JG gives us the best chance to win?? CJP is deaf and dumb.
Likes: JPL and Big Al Orange
B

hillsborovol said:
Probably not because Bailey wouldn't have gotten to play and drive for a TD.
Click to expand...
Let's say we hand off to gray instead of the stupid JG pass and he runs for five, then a couple plays later we punch it in. This is what I was saying. That's a 14 point turnaround.

BanditVol said:
Did he also say it was "bad"? It was bad, right? That's a bad thing. I think?

My thought exactly! Like, uh he does know that’s not a good thing, right?

golfballs said:
Yeah no **** but we also lost by 13.
Click to expand...
Pick six in end zone is essentially a 14 point turnaround.
Likes: BanditVol
C

VolBricks said:
But JG still gives us the best chance to win
Click to expand...
Then we have little chance. Sorry but the guy has had a bazillion chances and pick 6 is becoming his middle name.
B

JohnWardForever said:
Tennessee had the MO and was on the way to taking the lead; Running it down their throats. Score there, and the game is ours. 14 point swing, and DEFLATED Team.
Click to expand...
I wonder how the oline was able to turn it on like that. Where were they before that? Where were they before that in any game since Missouri?? They were flat out bullying auburns front for a couple drives tonight
Likes: JohnWardForever

BanditVol said:
Let's say we hand off to gray instead of the stupid JG pass and he runs for five, then a couple plays later we punch it in. This is what I was saying. That's a 14 point turnaround.

I know math is hard though. (-:
Click to expand...
But we would have to score again... I think that’s what he’s saying. Bailey scored the last TD. He wouldn’t have played if JG hadn’t JGd
Likes: 08Vol
K

Annnnnnnnd go
Click to expand...
Negative GhostRider. The biggest play if the game is Tennessee's first offensive play with JG as the starter. From there the loss is certain.
Likes: 08Vol
B

ACvol3 said:
But we would have to score again... I think that’s what he’s saying. Bailey scored the last TD. He wouldn’t have played if JG hadn’t JGd
Click to expand...
Ah I see. But our run game might have done it again. Prior to the pick, it was all Gray and a little Chandler.

Yeah, our oline was mauling and the backs were running hard. I think if we had another quarter to play, we would’ve had a good chance to beat them. 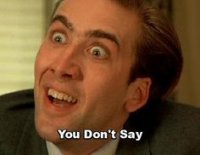 Annnnnnnnd go
Click to expand...
But JG gives us the best chance to win....
This guy should be cleaning out his office.
Likes: RockyTop140

Wow! I’m glad he was able to deduct that from tonight’s game. Maybe in 5 more years he’ll realize that developing your qbs is important!
Likes: 08Vol

When we was gonna score then they ended up scorin' instead...yeah, that was a biggun
Likes: 08Vol, Matt2496, McDad and 1 other person
T

ESPN thought it was one of the 10 biggest plays of the day and it may end up being ESPY worthy and one of the biggest college football plays of the year, but JG took forever to throw the ball, never tried to look at other receivers and threw the ball where only the Auburn defender could catch it. It was a critical error which Garantano is prone to make as was the busted coverage that allowed an Auburn 51 yard TD strike, receiver untouched and all alone.

This is the SEC and you pay for your mistakes dearly and the magnitude of these predictable errors on Tennessee demonstrates Pruitt's wholesale failings to be able to coach at anything other than a Saban led championship program.
Likes: WilliamDuVOL, 08Vol, EODVOL and 1 other person
New posts
You must log in or register to reply here.
<< Tennessee Vols Football Forum
Share: Facebook Twitter Email Link