ya know our best heyday was with a bunch of ga kids on the roster
Likes: HalfullVol

I'm back and meaner than ever.

Wait why was there a delay?

Blake25p said:
247 bumped him a while ago, it’s Rivals that’s dragging their feet.
Click to expand...
Yeah now that I look, it’s Pearce that 247 has so low. I got them backwards
Likes: Blake25p and SugarCC

Bassmaster_Vol said:
Yeah now that I look, it’s Pearce that 247 has so low. I got them backwards
Click to expand...
Likes: KptVFL, SmokeyDaBear, Blake25p and 11 others

Look forward to seeing this stud ball....voted the top defensive player in the state of GA !

VolzMan53 said:
Look forward to seeing this stud ball....voted the top defensive player in the state of GA !

Click to expand...
That’s awesome seeing our guys pick up awards like that.
Likes: Smokey19rt, SweetasSoda, HeadVol77 and 5 others

VolzMan53 said:
Look forward to seeing this stud ball....voted the top defensive player in the state of GA !

Click to expand...
That says a ton IMO…to be voted best in the state in a state that’s absolutely loaded with talent
Likes: sjt18, SweetasSoda, LittleVol and 5 others 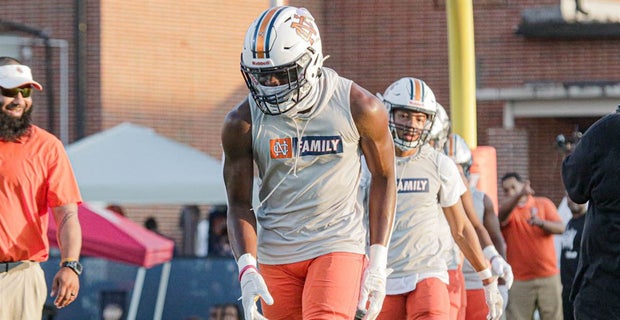 Player evaluation: A twitched-up front-seven defender that has a chance to be a difference-maker on Saturdays. Looks the part with a 6-foot-3, 215-pound frame and a verified 82-inch wingspan. Has been utilized in a variety of different ways at the prep level having rushed the quarterback from both a two and three-point stance. Has also been deployed as more of a traditional linebacker in certain situations. Fluid in almost everything he does and doesn’t waste many steps. Equipped with a few different pass-rushing moves and has won plenty of times on Friday nights with a simple long arm. Somewhat versed in how to stack and shed, although he will need to add some mass if he ever wants to set the edge or anchor at the next level. Ability to come down the hill and make stops outside the tackle box a strength at this point in his career. So are his coverage skills. Produced as a senior while playing in one of the Peach State’s highest classifications. Also tested well spring of junior year (4.3 shuttle, 32-inch vertical jump). Tweener traits could turn off some, but position ambiguity could be viewed by others as gold in an era where exotic fronts are used to combat high-powered passing attacks. Likely to thrive in a 3-4 look. – 247Sports Southeast Recruiting Analyst Andrew Ivins

We sure this kid didn't sign somewhere else? Been told we don't know how to recruit defense around here. How'd we even know about him, since his picture wasn't on a board, that we didn't even have?
Likes: butchna, SweetasSoda, HalfullVol and 6 others

Really need him to step in and be an elite pass rusher.

Vols2DaWall said:
Not sure he has quite the build to be a day 1 starter in the SEC
Click to expand...
He doesn't need to be. Just need him to provide a nice change up in edge pressure to compliment the other guys.

LittleVol said:
He doesn't need to be. Just need him to provide a nice change up in edge pressure to compliment the other guys.
Click to expand...
If you’re a starter you have to have bulk to play the run. I see him at best as a 3rd down specialist until he can mold his body into an every down SEC defender