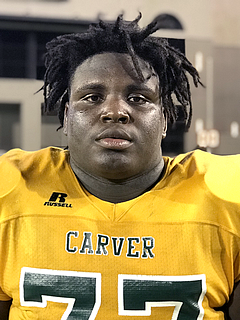 James Robinson isn’t surprised with the attention coming his way, as his recruitment starts to pick up. “I feel like it’s well deserved,” the 2020 three-star offensive lineman out of Montgomery, Ala., told GoVols247. “I put in hard work. Hard work year round.” The hard work has led to offers from Tennessee, Missouri and Virginia Tech for the 6-foot-4, 315-pounder out of Carver High School.

He picked up the offer from the Vols during a visit over the weekend, visiting Knoxville with 2020 strong-side defensive end Khurtiss Perry and 2020 defensive back Kendrick Simpkins. “We toured the facilities,” Robinson said, “took the pictures in the uniforms. They’re talking to me about being a guard,” he said of Tennessee’s recruitment, “but being able to play tackle.”

Robinson said he prides himself on aggressiveness and being able to play with tempo. His footwork is what he’s currently working on, trying to get better in pass sets. “Learning how to protect better,” Robinson said. He’s expecting to keep hearing from Tennessee after the offer was delivered during the visit. He’ll be back on campus at some point, too, but a specific date hasn’t been set yet.

“They’re telling me just keep playing ball,” Robinson said, “and they’ll keep in touch.” After visits at Troy and Tennessee, another SEC stop is next on his schedule. “I’m supposed to be going to Georgia in a week,” Robinson said.
Click to expand...
-247
Likes: TN-POSSUM, kmkemp11, T Dog and 1 other person

Click to expand...
At first, I was focusing on the guard. I was like my goodness he is kind of rotund, and slow. But then I realized that he is playing tackle....

Montgomery, Ala. (Carver High School) offensive guard James Robinson made his first trip to Rocky Top over the weekend and left with a Vol offer as the 6-4, 315 pound lineman sees his recruiting stock rise. “It went it good,” Robinson said of the trip. “I left with an offer. Coach Martin and I had been talking and kind of expected them to offer. They said they really wanted me and that they like my aggressiveness and footwork.”

While Tennessee made it clear how much he is wanted, Robinson’s take away from the visit was how things felt. “That was my first time up there and my first impression is that they made it feel like it was home right when I got there,” Robinson said. Robinson got to see the Vols workout and got to spent a good bit of time with the coaches and Tennessee’s athletics director. “I spent time with coach Pruitt, coach Fulmer, coach Ansley, and coach Friend,” Robinson said. “Coach Fulmer told me that I reminded him of Fred Weary, a player he coached.”

Weary was also from Montgomery where he went to Lee High School. Tennessee beat out Auburn in a heated recruiting battle for him in 1997. To date, Robinson has seen Troy and Tennessee unofficially. He will see Georgia next week. He also plans to see LSU as well as return trips to Auburn and Alabama. “I think as more people see me and as more schools see me get offers then more offers will come,” said Robinson, who currently holds 6 offers.

After a trip to Rocky Top and an offer to wear the the orange and white, Robinson is certainly interested in the Vols and plans to see Tennessee more. “Tennessee stands at the top of list right now. I will come back up and see them again sometime.” Robinson said. “I’m taking my time with the process. My plan is to decide after may senior year and sign in December.”
Click to expand...
-VQ
Likes: wwilso29, BornToBleedOrange, GoVolsDR and 4 others

T Dog said:
That last sentence?
Click to expand...
Maybe after his senior year of football.

Maybe he had the confused.

Bring on the beef

Ron Swanson said:
Auburn offered today
Click to expand...
dang normally they wait until the second week of February to make their move$. early this yurr

reVOLution33 said:
Lol what happened to our "big time recruiters?"
Click to expand...
TF wrong with you
Likes: orangebloodgmc, Orangeredblooded, Paper_Towel and 7 others
N

reVOLution33 said:
Lol what happened to our "big time recruiters?"
Click to expand...
Part of being a great recruiter is being a great evaluator. So far this staff hasn’t given me any reason not to trust it’s evals
Likes: Plecoptera, orangebloodgmc, 85SugarVol and 12 others
B

What constitutes good recruiting? Getting the guys here who 247 and Rivals think are good? The same companies who drop kids after they come to their camps and perform well? I'll pass on trusting their judgement over our staff's lol
Likes: orangebloodgmc, Paper_Towel, wwilso29 and 8 others

Big Z said:
What constitutes good recruiting? Getting the guys here who 247 and Rivals think are good? The same companies who drop kids after they come to their camps and perform well? I'll pass on trusting their judgement over our staff's lol
Click to expand...
Got all these star queens round here...
Likes: VOLATNES
New posts
You must log in or register to reply here.
<< Tennessee Vols Recruiting Forum
Share: Facebook Twitter Email Link