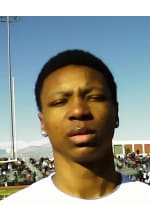 Tony Mitchell received an offer from Tennessee on Monday. He added it to a growing collection that already includes Mississippi State, South Carolina and Georgia Tech. Florida Atlantic and Jacksonville State have already offered, too. It should be noted: Tony Mitchell is in the eighth grade. That hasn’t slowed schools down in trying to get a head start on the 6-foot-1, 180-pound athlete from Alabaster, Ala., a rising star in the class of 2023.

“It’s crazy,” Mitchell told GoVols247. “Not that many eighth graders, or high schoolers, are getting offers. “It just motivates me to work hard so I can be good at the next level.” Right now the next level is high school. He’ll be attending Thompson High School in Alabaster, preparing himself now for the start of his varsity career. He started playing the game at 5 years old. He started at running back and linebacker, he said, before moving to his current positions at receiver and cornerback. “As I started growing, getting taller and getting faster, I moved to receiver and corner,” Mitchell said.

On top of the SEC offers from Tennessee, Mississippi State and South Carolina, Mitchell is drawing interest from Alabama, Georgia and Penn State. “It’s a really good feeling,” Mitchell said of the college attention at such a young age. “Growing up I always dreamed of playing for big-time schools. Now that I might get an opportunity, it’s a blessing.”

He said he wasn’t a fan of a particular college football team growing up, but instead just loved watching the sport. Mitchell may play at that level one day, but he has high school football to worry about first. “It ain’t going to be easy, just like middle school,” Mitchell said. “Next year I’m going to be playing varsity so I’m going to have to be on my A-game and work hard in the offseason so I can be prepared for the season.”
Click to expand...
-247
Likes: ScornedPapaVol, Bruce Wayne, FïreBall and 1 other person 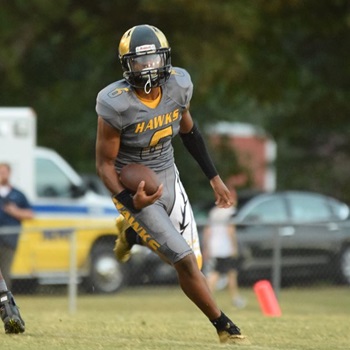 Can he reclassify to 2019?
Likes: Winchester73, SweetasSoda, Bassmaster_Vol and 1 other person

Special Ed said:
Can he reclassify to 2019?
Click to expand...
Grade concerns
Likes: LittleVol, Type Orange+, memtownvol and 3 others

The article keeps quoting him saying "growing up".. Like its past tense
Likes: SweetasSoda and Bassmaster_Vol

Madison, Alabama athlete Tony Mitchell is yet to even reach high school, but that hasn't stopped schools from recognizing his talent. He currently sits with six offers including schools from both the SEC and ACC. "It's really a blessing," Mitchell said. "Me being just in the 8th grade, most kids don't get this kind of attention. It just motivates me to work hard to be the best at the next level." At 6-foot-2 and 187 pounds, Mitchell has the size and skill set from an early age that just seems to translate into what college coaches like.

"They see potential in me and see how well I'm doing," Mitchell said. "They believe I can come in and help their programs. They like my size and speed. That's mainly what they talk about when they discuss my game. It's a great school and they have a great football program," Mitchell said. "I like Tennessee. I've spoke to David Johnson and he's a real down to earth guy. He tells me that I can be really good at the college level. When he was talking to me, he was telling me I have to work hard if I want to be the best."

South Carolina, Georgia Tech, Mississippi State and others join Tennessee in offering Mitchell. The attention is great, but he's going to do his best to not let it effect who he is and how he works. "I can't get the bighead," Mitchell said. "I know others don't have these offers and people are going to come at me because I do and they are going to want to prove themselves against me. I just have to keep my head down and keep working and not let it effect me."

Mitchell plays 7 on 7 for the Southern Xpress with other talented players like Alabama commitment Malachi Moore. Having older teammates that have seen the process is a huge help to Mitchell. "They are like big brothers," Mitchell said. "They are mentors and they talk to me about the process and about high school ball. They show me how to handle myself and that's a big help so I can talk to them about it all."
Click to expand...
-VQ
Likes: Bruce Wayne, FïreBall, T Dog and 1 other person

6'-2" in 8th grade? He will at least be 6'-21" by his senior year according to VN
Likes: VOLSONLY, memtownvol, Bassmaster_Vol and 2 others

On Friday the Vols picked up a pair of 2020 commitments. Saturday afternoon Jeremy Pruitt banked one for the future, taking a commitment from promising 2023 prospect Tony Mitchell.

Mitchell (6-foot-2, 187 pounds), from Madison, Ala., hasn’t even begun his high school career yet, but is a promising enough athlete that Tennessee extended an offer following his camp performance.

It’s obviously an early decision for Mitchell, but he felt comfortable with the move.

“I really like it here, school wise and the football program. I just feel like it’s a good fit for me.”
...

“Both of them like me a lot,” Mitchell said of Pruitt and Ansley. “I could tell just with the way they talked to me, they’re serious about me. They have goals for me, they want me at their school and feel like they’re really good coaches.”
...

“I think that I’m good at playing press coverage, I have good feet, good hands and I stay on my guy,” he said of his strengths. “I feel like I’m a good lock down defender, not too many kids make catches on me.”

“I talked with my mom and dad about it as well as the Coach Pruitt and Coach Ansley and Byron (Devinner), my coach,” Mitchell said. “My parents were real comfortable with it. They feel like this is a good fit for me.”

Means nothing this far away. Especially these days.
Likes: JacketVol, LouderVol, Berry4Heisman14 and 1 other person

Veeeeery unlikely the kid sticks with this commitment but BOOM nonetheless.

If nothing else, it speaks to the energy and excitement the people are feeling at this camp.

He's a big time prospect for his class... and he's been to a number of programs, including Alabama. He came here and he committed to us.
Likes: WeeohdeeWood, ChismsHeadband, T Dog and 1 other person

Well we had no MO but that’s no MO. Expect dominos.
Likes: Bruce Wayne, SweetasSoda, Bassmaster_Vol and 2 others

The Class of 2023 athlete/defensive back, who plans to attend Thompson High School in Alabaster, Ala., announced Saturday that he has committed to Tennessee, choosing the Vols during his latest visit to Knoxville after he impressed their coaches during their latest camp.

The 6-foot, 176-pound Mitchell gave Tennessee its first commitment for the 2023, picking the Vols over scholarship offers from Georgia, South Carolina, Texas A&M, Mississippi State, Georgia Tech and West Virginia, among others.

Tennessee extended an offer to him in April, and he admitted at the time that it was "crazy" that he already was getting offers and significant interest from major programs.

"Not that many eighth-graders, or high schoolers, are getting offers," Mitchell said in April. "It just motivates me to work hard so I can be good at the college level. ...

"It's a really good feeling. Growing up, I always dreamed of playing for big-time schools. Now that I might get an opportunity, it's a blessing."

Mitchell starting playing football when he was 5 years old. He told GoVols247's Grant Ramey in April that he started off playing running back and linebacker before moving to his current positions, wide receiver and cornerback.

"As I started growing, getting taller and getting faster, I moved to receiver and corner," Mitchell said at the time.

Last month, he was timed at 4.88 seconds in the 40-yard dash and 4.56 seconds in the agility shuttle at The Opening Regional in Murfreesboro, Tenn., where he also posted a 30.8-inch vertical jump.
Click to expand...
-247
Likes: T Dog

@bignewt going to celebrate this one hard.
Likes: T Dog, Bassmaster_Vol and JCP201

butchna said:
Well we had no MO but that’s no MO. Expect dominos.
Click to expand...
Post may shizzzzz

“I talked with my mom and dad about it as well as the Coach Pruitt and Coach Ansley and Byron (Devinner), my coach,” Mitchell said. “My parents were real comfortable with it. They feel like this is a good fit for me.”

@bignewt hey my man put his commitment date next to his name for I’m busy at the moment.
Likes: T Dog and Bassmaster_Vol

HoleInTheRoof said:
“I talked with my mom and dad about it as well as the Coach Pruitt and Coach Ansley and Byron (Devinner), my coach,” Mitchell said. “My parents were real comfortable with it. They feel like this is a good fit for me.”

HoleInTheRoof said:
“I talked with my mom and dad about it as well as the Coach Pruitt and Coach Ansley and Byron (Devinner), my coach,” Mitchell said. “My parents were real comfortable with it. They feel like this is a good fit for me.”