We wouldn’t say that Tennessee’s 2024 board is written in stone just yet by any means but the Vols have a core group of guys in next year’s class that they seem to be serious about.

This shouldn’t be considered a definitive list as it’s early and things will change over the next 9-10 months, but here is a group of guys that we feel like Tennessee is serious about at this stage.

how many will they take in 24’ class? looks like it could be another top 10 class .

Ace Bailey seems to have some momentum to...wait for it...Auburn.

cncchris33 said:
Ace Bailey seems to have some momentum to...wait for it...Auburn.
View attachment 515522
Click to expand...
Pearl plays that Atlanta connection to a T.

JRVOL11 said:
high schooo is an auburn pipeline. okoro, cooper, cardwell, and another big.
Click to expand...
Yes, you are correct which is part of why I sarcastically mentioned it, combined with the fact that AU seems to routinely be in on the same players Tennessee is involved with.

It is worth mentioning that Bailey is not originally from Atlanta, though (I think). Pretty sure he is from either north Georgia, or perhaps even Chattanooga. He previously attended Boyd-Buchanon before transferring to McEachern.
Likes: allvolrecruiting, Volfan1000 and JRVOL11

Everything woke turns to sh*t

Dallasbowlin said:
I have seen zero news on Cyril. I know Tennessee cooled, but I’m talking from any schools.
Click to expand...
Think I saw he visited Cincinnati recently
Likes: Volfan1000 and Dallasbowlin
J 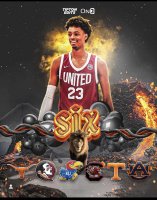