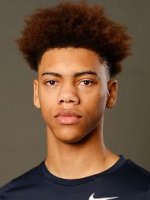 Had an official visit this weekend.

Jaden Springer wasn’t exactly unfamiliar with Tennessee heading into his official visit over the weekend.

The five-star shooting guard, ranked No. 12 overall in the industry-generated 247Sports Composite in the class of 2020, had already been on campus in Knoxville three or four times.

But the view during the official visit was a different one.


“It was good,” Springer told GoVols247 on Sunday. “They showed me around the campus, told me what the school was all about. They had a good game against Kentucky.”
Click to expand...
“Tennessee was pretty good. Great environment, great people.”

The Vols, led by associate head coach Rob Lanier, have been chasing Springer sine the summer of his freshman year at Rocky River High School in Charlotte.

Coach has always gotten great talent at Texas. IF and when he brings in top talent here look out VOLS!!!🍊
Likes: TennMan101, sport3500 and Tennesseefan2019

Bobby Maze better come through with this one .
Likes: UTSuave’, sport3500, Big Orange#1 and 2 others

JRVOL11 said:
Bobby Maze better come through with this one .
Click to expand...
Got him and Drew Pember in his ear hopefully.

SJAVol32 said:
Got him and Drew Pember in his ear hopefully.
Click to expand...
Corey Walker as well...said he was telling him Saturday he needs to be a Vol.
Likes: TennMan101, Stoked, Smokeyman and 2 others

bleedingTNorange said:
Corey Walker as well...said he was telling him Saturday he needs to be a Vol.
Click to expand...
Perfect.
Likes: TennMan101
S

Does he play at the same high school that Williams played at?
B

Those quotes don't seem overly excited.
Perhaps that's just the way he communicates. At least I hope so
Likes: barrylee, CAVPUT and Catbone

sport3500 said:
Does he play at the same high school that Williams played at?
Click to expand...
No.
Likes: sport3500

BruinVol said:
Those quotes don't seem overly excited.
Perhaps that's just the way he communicates. At least I hope so
Click to expand...
He’s really calm and collected in all the videos I’ve seen of him speaking. I wouldn’t read anything to it IMO.
Likes: Stoked, tennrich1, Vols All Day and 1 other person

sport3500 said:
Does he play at the same high school that Williams played at?
Click to expand...
No, and he attends IMG, now.

Tennessee’s resounding win over Kentucky wasn’t just big for what it means for the Vols’ in the standings, it was also a picture perfect way to showcase the program for some high profile recruits in attendance, such as five-star shooting guard Jaden Springer who was in town on an official visit. Springer (6-foot-4,185 pounds) is originally from Charlotte but transferred to IMG Academy in Bradenton, Fla. for his junior year. The No. 11 overall player in the Class of 2020, Springer has been a high priority target for the Vols since his freshman season.This was his second trip to Knoxville to see a game, ironically he also saw Tennessee knock Kentucky off last year, and he came away impressed with the game day atmosphere. “The game was really cool, the environment in there was just great, it was packed and the crowd was really into the game from the start,” Springer said of game day on Rocky Top.
Click to expand...
“I like they’re style of play, on both ends of the floor, that’s something I paid a lot of attention to and the way they play fits my style.” Springer was taking advantage of the new NCAA rule that allows juniors to take official visits. This was the first official trip that Springer has taken. He has no firm plans set up for additional official visits but plans on using a few more this spring. He added that he’s not really close to trimming his list down to list of favorites, let alone a top five, but the fact that he just took his first official visit to Knoxville is evidence that the Vols are firmly in the mix at this early stage. On Friday, Springer had a chance to tour campus, see some behind the scenes aspects of the program and take in a Tennessee practice to see Rick Barnes in action. The approach of both Barnes and his players stood out. “What I really noticed is just how serious everyone was taking it,” Springer said of how the Vols go about their work. “Everybody was really locked in, that stood out. It was serious business.
Click to expand...
“I got in a little workout with Coach (Garrett) Mendanwald, I like what they have done with their strength and conditioning program, you can tell that they take it real serious, it shows.” As someone that the Tennessee staff has been recruiting earnestly for more than two years now Springer already has a good feel for the program and the staff, what he was able to see over the course of his official visit deepened his understanding of what Barnes has done here in Knoxville, but at the same time, what already appealed to him about Tennessee was what stood out the most to him on his trip. “The main thing that stands out to me is just the environment that they’ve built around they team with the coaches and the players,” Springer said. “They’re all good people. That’s important to me. Everything is just all positive and you can really see that everyone in that program cares about each other.” Springer plays his summer ball for the B-Maze Elite squad on the UnderArmour circuit, the grassroots program created and run by former Vol Bobby Maze and he’s been a teammate of incoming signee Drew Pember in that program.
Click to expand...
-VQ
Likes: sport3500, spyfish007, kmkemp11 and 3 others

JRVOL11 said:
Bobby Maze better come through with this one .
Click to expand...
Does he play on “big money” Bobby maze’s aau team? Btw nice avi.

jarnol32 said:
Does he play on “big money” Bobby maze’s aau team? Btw nice avi.
Click to expand...
That he does.
Likes: jarnol32 and Orange Swagger

The highest ranked player on Tennessee’s board, the 5-star combo guard is an elite recruit by any measure. Springer is already well-versed in the recruiting game by now so gives very little away in interviews. Despite that it feels like the Vols are ahead of the game here. Springer took one official visit as a junior, to Knoxville to see Tennessee blow Kentucky out. He has been on campus prior to that unofficially and has been a high priority for this staff since his freshman year. He plays for one of the top private school programs in the nation at IMG Academy but is originally from Florida.
Click to expand...
North Carolina recently stepped up with an offer though some have wondered what took them so long. At this time of his career, Springer just physically dominates his peers. He’s got a physique and a strength level that few prospects his age can match, particularly perimeter players. He gets into the lane virtually whenever he wants to, is a superb finisher and can knock down shots from beyond the arc. He seems most comfortable with the ball in his hands but can play off the ball as well and still have plenty of impact on the game.
Click to expand...
-VQ
Likes: sport3500, highspeed, AngryButchJones and 3 others

“Cutting” doesn’t mean the same as it used to.
Likes: CAVPUT and Caculator

Collective eyeroll at a top 11 for a kid set to sign in 6 months.
Likes: RyanWalkerPGH, JoAllan and coskramer
B

This whole top ___ list thing is such a joke at this point I'm ready for someone to take it to the next level. "Tonight I'll be releasing my top 27"
Likes: CAVPUT and ukvols