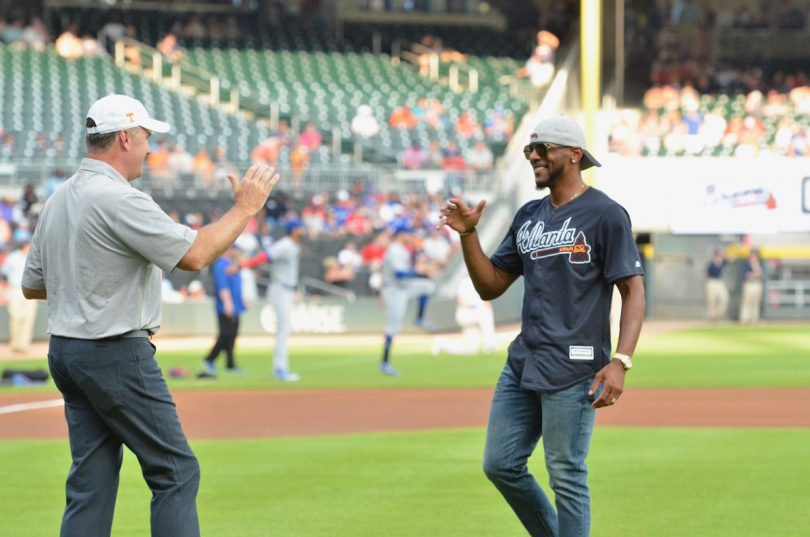 Wednesday night was University of Tennessee Night at Suntrust Park in Atlanta.

The Braves hosted the Toronto Blue Jays and fans in attendance received a Braves/UT co-branded hat. In addition, $3 of every ticket package went to UT scholarships which will benefit Atlanta area students.

Price played for Tennessee from 1995-98. His final game in orange was perhaps his most memorable, as the speedy receiver caught four passes for 199 yards and a TD, helping the Vols win the BCS National Championship. His fourth-quarter 79-yard touchdown reception from quarterback Tee Martin is one that will never be forgotten.

After being selected with the 53rd pick in the second round of the 1999 NFL Draft by the Buffalo Bills, Price played eight seasons in the league, including stops in Atlanta and Dallas before returning to Buffalo for his final season in 2007.

Chuck Smith, who played for Tennessee from 1990-91 and Johnny Majors called “the best defensive end I ever coached,” was also in attendance and seen leading the Braves’ Chop.

It’s University of Tennessee Night at @SunTrustPark and #VFLs were well represented! @PeerlessTheVol tossed the 1st pitch.@chucksmithnfl was the Leader of the Chop.