You give the pre game talk for Vandy.

Please ban me. VN is toxic.

Men, this is going to be relatively short.
We don't pay any attention to opponents' fanbase nonsense on social media -- but there IS one bit of silliness that I want to bring to your attention -- about a game of football played 100 years ago this month, here on this very field.

In its football history books, Vanderbilt lists a win over Tennessee in 1918. Tennessee’s football history — and the rest of the world — DO NOT recognize a University of Tennessee football season in 1918. That’s because so many UT students were serving their country in Europe in World War. Young Tennessee men were getting killed and maimed in the horrible trench warfare in France.

But a group of mostly freshmen and sophomore cadets at UT — called the Student Army Training Corps — wanted to carry the Tennessee banner on the football field in that war autumn of 1918. They got a late start, playing 5 games, all in the month of November. They lost 68-0 on the road at Sewanee, and the next Saturday, they lost to the Vanderbilt varsity 76-0 here at Dudley Field. Both Vanderbilt and Sewanee were Southern football powers at the time.

I don’t know why the Vanderbilt varsity players were not off in France, fighting in the trenches alongside other young men from across this great nation and this great state. I don’t know why Vanderbilt played official football that fall when so many colleges called it off while their students were helping make the world safe for democracy. Seven years after that 2018 scrimmage, a young veteran of that terrible mechanized war — a West Point graduate named Robert Neyland — came to the Hill. He pretty quickly established a NEW Southern football power.

But Vanderbilt officially lists that 76-0 win over those young guys as a full-fledged victory. They don’t put an asterisk by it with a footnote. Wikipedia says that “Vanderbilt considers the game between the two schools as an official game; however, the University of Tennessee does not, SINCE MOST OF THEIR TEAM WAS ENLISTED IN THE MILITARY FIGHTING IN WWI.”

Vanderbilt fans have been GLOATING on their message boards about that 76-0 victory 100 years ago this month, by their varsity over a group of young cadets with very little practice time and very little coaching. I guess when you’re on the short side of a 75–32–5 series record, you have to take your shots when and where you can.

Let's go out there, play hard, play loose, play close and have fun -- and win it in the names of those 11 Tennessee Volunteer cadets who took on the football powers of 100 years ago.
Last edited: Nov 24, 2018
Likes: OneVolNation, DazzleVol and Rodeo vol

“....and the last thing I’m going to remind you is the one thing Tennessee always does is kick the s_ _ t out of Vanderbilt.”

If you can't step up and find the will to win in this one, in such a winnable situation with so much on the line, you never will. Ever. Go out there and get it done. No excuses. No tomorrow. It's now or never.

KBVol said:
“Are you buncha no talent pu$$ies really gonna lose to Vandy...again?”
Click to expand...
That's really all that needs to be said 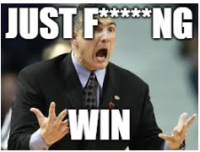 dduncan4163 said:
That's really all that needs to be said
Click to expand...
Strictly quoting your message so I can ask if you were at the Hinson show last night?
Likes: dduncan4163 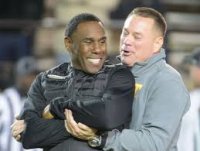 I would have this playing on a loop in the locker room.

'Nuff said.
Click to expand...
I think this is the definition of "being on the down low"

“It’s Vandy. Go out there and do what we’re supposed to do.”

Rocky Top Raby said:
Strictly quoting your message so I can ask if you were at the Hinson show last night?
Click to expand...
No, but I'm going to his New Year's eve show at the Exit In. Few things in this world are as fun as a Hinson show.

Vfl2407 said:
“Guys, this is my first Vandy-Tennessee game...aight....but I already know how important it is...especially to all you guys from the midstate,,,and even more when it’s here In Nashville....although I see there’s a lot more orange than gold in the stands, aight....I don’t need to tell you that there’s a bowl game up for grabs for both teams...aight....so, who’s gonna want it more...who’s gonna win those 50-50 battles more today....aight.....you’ve got it in you to do that...you showed me that against Auburn and Kentucky.....aight....let’s keep this season going a little longer for our Seniors, aight......let’s go win this damn thing!”

Your Turn.
Click to expand...
Wow....okay, that was pretty damn good. Nice job!

dduncan4163 said:
No, but I'm going to his New Year's eve show at the Exit In. Few things in this world are as fun as a Hinson show.

Click to expand...
The Exit In is still around? That is awesome.
Likes: dduncan4163

NorCalVol67 said:
The Exit In is still around? That is awesome.
Click to expand...
Yup it's still there. It's been a second home to me for 20 plus years. I've caught The Undead Outlaw there many times over the years.
Likes: NorCalVol67
S

I would probably question their "manhood," that gets boys fired up!

"I expect you, the fan base expects you to play like you've got balls between your legs, not a pu$$y. Now go out and play ball, it's time to prove you gottem, aight!!"

"Either play like you want it, or sit yourself out and let somebody else take your spot."

dduncan4163 said:
No, but I'm going to his New Year's eve show at the Exit In. Few things in this world are as fun as a Hinson show.

Click to expand...
First time seeing him and it was an outright blast.
Likes: dduncan4163

Rocky Top Raby said:
First time seeing him and it was an outright blast.
Click to expand...
He always puts on an amazing show. I've seen him more times than I can count over the years and I always have a great time.
Likes: Rocky Top Raby

I would crank this up in the locker room about 4 minutes before heading out to the tunnel. I know it always gets me fired up before stepping on the rugby pitch.