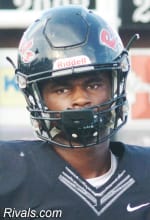 Play for the Vols and Ill forgive him for being a Maryville Rebel.. jk

Does it say which position

I’m not actually a coach

A Maryville kid? I thought that was forbidden!
Likes: Smokeyone
D

Lil cuz is a beast this is Isaiah Cobbs brother aka Randalls nephews
Likes: Mccage, Volunteer_Kirby and hooter vol

Why did we bump the thread of a class of 1986 recruit?
Likes: southpaw75

Sleegro said:
Why did we bump the thread of a class of 1986 recruit?
Click to expand...
"Now this is a story all about how, my life got flipped turned upside down..."
Likes: 82_VOL_83, southpaw75, Nickoli and 1 other person

Shuttle is pretty good for a HS...

Magic8Vol said:
Does it say which position
Click to expand...
I would say LB
L

This KID has good size and strength.
Likes: 1 person

they really wanted me to come to camp and stuff like that, so i came to camp, hodge said. the offer did kind of surprise me, but they did show a lot of interest. I think what stood out was my speed  my size and my speed, for me to be so big, he said. i think that kind of stood out to them, and them seeing me in person for the first time  and my size and my quickness, for me to be that big  i think that kind of stood out.

me and coach weinke joke about this, but my favorite team is actually florida state, hodge said, referring to tennessee running backs coach chris weinke, a former heisman trophy-winning quarterback at florida state. hell joke around with me. Ive always rooted for tennessee. Whenever they play, ill root for them to win.

he said he expects to give tennessee strong consideration now that he has an offer from the vols, adding that staying home would be nice because he has always been more of a homebody. Itll be tough to beat them, hodge said. im going to treat them like any other school, even though theyre right down the road. I mean, theyve got some nice facilities down there. I like the campus. Its nice down there, so itll be tough.
Click to expand...
-247
Likes: TN-POSSUM, AlcoVOLic, Nickoli and 9 others

sweet. didn't realise he was RC's nephew. maybe we'll get one of these right lol.

What happened?
Click to expand...
Keto diet is real.


Nah, I updated the OP with his 247 profile stats and removed the hudl stats since he now has a 247 profile page.
Likes: 1 person

Good for this kid!!! He comes from a great family and I hope he ends up a vol
Likes: BucksnortVol

looks like we have one of our '20 RB's
Likes: Easttnken and quadlee21
B

Go Fight Win said:
looks like we have one of our '20 RB's
Click to expand...
I sure hope so. These Blount County kids (both Maryville and Alcoa) tend to not go our way in the long run for one reason or another. I can't think of the last Maryville player to have a good football career at Tennessee (I'm not counting Aaron Douglas who would have finished his career at Alabama).

"I felt like I was having a good day," Hodge said of his performance on Saturday. "It was a confusing moment. We tested at first and then we did some position drills. Coach (Chris) Weinke told me he wanted to talk to me and it became apparent they may pull the trigger. Then I spoke to coach Pruitt and that's when it went down. I was extremely happy," Hodge said. "It has set in the last couple of days, but it is still kind of a dream."

The Tennessee staff was by Maryville twice this spring. Once it was Tyson Helton and the other time it was running backs coach Chris Weinke dropping by to check on Hodge and his teammate A.J. Davis. The first year Vol tailbacks coach has stayed in touch with Hodge and that relationship is blossoming.

"He's a great guy," Hodge said. "He gave me some great advice about ball security and stuff like that. Stuff I can take back to high school and improve my game. "I was a fan of Florida State growing up and he and I joke about that. But with that said, whenever I saw Tennessee playing, I cheered for them."

And with one big domino to fall, Hodge is hoping to see more offers coming his way in the coming days and weeks. All the while staying grounded and focused on becoming the best player he can be. "It's exciting and I'm hoping they start to roll in now," Hodge said. "I just have to stay working hard and never be satisfied because I have a lot of stuff to improve on. That's how I will approach it and my focus turns into becoming a leader on my team and helping us get back to state."
Click to expand...
-VQ
Likes: jabroni, igotcha, wwilso29 and 1 other person
New posts
You must log in or register to reply here.
<< Tennessee Vols Recruiting Forum
Share: Facebook Twitter Email Link