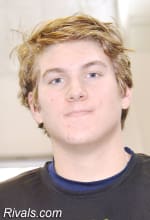 Looks like someone who ends up at Vanderbilt. Not skill wise or anything. Like literally looks like a player for Vandy.
Likes: Tri-CitiesVol, BigOrange15 and StoVol

At 6-foot-6 and just wrapping up his freshman year in high school, it's hard for 2022 Tennessee offensive lineman Fisher Anderson not to draw attention from visiting college coaches when they come through town. So far, that attention has already led to a trio of SEC offers for Anderson, who is likely going to keep adding them as his career moves along. "I just got that offer. I called Tee Martin and we talked and he let me know I had an offer. My mom went there and my sister is there now so it's definitely been a goal of mine to get that offer. I would have been disappointed with myself it I didn't work hard and get that offer by the time my senior year came around so I'm glad that it came now and I know everything I'm doing is working. I can now say that's a real option for me."
Click to expand...
"That was my first unofficial visit. As soon as my season ended I went up there. I'm going to try to get back now that I have an offer. I think I'll probably go for their camp, but I want to go see them practice and I want to get there for a game in the fall." "I don't want to go to an extreme amount of camps because I'm just a freshman and I'm just getting started. But I will check out some schools. I'm trying to choose wisely. I want to go to the places I've received an offer from." Anderson has the type of frame that offensive line coaches love, and has he continues to add strength, there's only going to be more major programs that come calling. Once Anderson starts taking visits, it will be worth reading into where he goes, but at this point in his career he's just getting started on his recruiting journey.
Click to expand...
-Rivals
Likes: Volfan1000, VolByLaw, Ron Swanson and 3 others

As a lifelong Middle Tennessee resident with a couple of family ties to the University of Tennessee, Fisher Anderson naturally hoped that he eventually might get a scholarship offer to play football for the Vols. He just didn’t expect it to happen so soon. The Class of 2022 offensive tackle from Franklin (Tenn.) High School said he was pleasantly surprised to pick up an offer from Tennessee a little more than a week ago, and he admitted it was “very exciting and a joyous moment” when he received the news.

“It was kind of a surprise when I got the offer from them. It was before I had expected, but I was hoping it would come eventually,” said Anderson, who’s expected to be one of the top prospects from Tennessee in the 2022 class. “It was a very, very exciting moment. I couldn’t stop smiling, just because it made it a reality to have that as an option to go when the time comes.”

Anderson, who also holds early offers from Kentucky, Missouri and South Carolina, said he didn’t grow up dreaming of playing “specifically” at Tennessee. But he was born and raised in Franklin, and he already holds the Vols in high regard after visiting them three times within the past nine months. “There wasn’t a specific tie to (Tennessee growing up), because my parents were both very evenly spread on the encouragement to go wherever,” Anderson said. “Also, they weren’t forcing their opinion onto me in any way to their respective colleges, so I’m grateful for that. “I’d say any type of being a fan of UT started coming after my sister went there.”

“From what I’ve seen, I really like the coaching, how kind of true they are right now,” he said. “Of course, I don’t have anything to base it off of, except for just a couple other coaches. But I like how they all the coaches (grew) up the same way. They all have the same (humility) and values. “And Coach Pruitt, when I talked to him, was very flat-out. He didn’t try to say anything to try to make UT bigger than it really was.”

Anderson said he’s already planning on "getting up there for a camp” next month to take a closer look at Tennessee and work with the Vols’ coaches on the field. He also has visited South Carolina, Kentucky, Vanderbilt, Louisville and Western Kentucky to this point, and he said he’s hoping to make a few other stops sometime this summer. “We have planned to go to South Carolina, close to around the time of UT,” Anderson said. "I don’t really know for sure (where else I will visit) — maybe Auburn. I don’t know. Maybe places like Clemson or Kentucky, but not for sure.”
Click to expand...
-247
Likes: BucksnortVol, SweetasSoda, MoB_MoVols and 2 others

Camped today per 247
Likes: T Dog, SweetasSoda, SweetAsSodaPop and 1 other person
B

I have a buddy who went to school with him. This kid is a big UT fan and his sister goes here. I think we will have no problem getting him.
Likes: SweetasSoda and T Dog

Bassmaster_Vol said:
I like this guy
Click to expand...
Is this your sons name? I know someone that played softball in college and named her son Fielder.
Likes: OrangeShade and Bassmaster_Vol

SweetasSoda said:
Is this your sons name? I know someone that played softball in college and named her son Fielder.
Click to expand...
Lol no
Likes: Coach Punk and SweetasSoda

“I definitely have faith in coach [Jeremy] Pruitt and I know he had a great recruiting class last year and expected more than what happened this year,” Anderson told Volquest. “But it’s really hard to judge a team’s success this past year because of COVID. Another year of a full-regular schedule could change.

“When you’re looking at the teams I’m interested in and seeing some of the records that might be ‘below average,’ it’s just tough to judge in this kind of season. I’m definitely still looking towards the future and seeing the season ahead because there were guys out every week.”

Another hurdle in the offensive tackle’s pursuit by the Vols is now the absence of an offensive line coach. Anderson and former Vols’ position coach Will Friend – who departed for South Carolina last week - had been developing a relationship over the years.

It’s important for the prospect to see who the program brings in next.

“It’s surprising me a lot,” Anderson said, “seeing all the movement in that position coach over the past couple of seasons across the conference. I know there are a lot of great coaches out there, so it will be cool to see who they bring in.
Click to expand...
“But that’s my next step with Tennessee – seeing who they bring in to coach the offensive line. I am still talking with coach Pruitt whenever possible and coach [Tee] Martin about every other week.”

Still, the Volunteer State native notices the talent the Vols possess on the offensive line with the likes of Cade Mays, Wanya Morris and Darnell Wright.

“I know those guys are great and I know what they are capable of,” Anderson said. “I’m ready to see them dominate next season.”

Franklin finished the season at .500 before going on a run to the third round of the playoffs – the farthest the program has made it in 10 years. The Vols target wasn’t satisfied with his performance as a junior and is expecting more in the year to come.

“My sophomore season was my breakout year. I wanted to continue that momentum, but I didn’t feel like I was hitting the level I should have been early on in the season,” Anderson said. “By the end of the season, I felt like I was doing OK, but I’m still not satisfied.”

In doing so, Anderson decided to take up a new hobby this offseason.

“Instead of playing basketball this winter, I decided to wrestle,” the prospect said. “I know it can really help a lot with linemen’s footwork and velocity. I’m wanting to go out and dominate next year.”

With everything so unpredictable right now in the recruiting world due to the pandemic, Anderson is unsure if he will sign next December as visits are of more importance than ever for this class.

However, the prospect would like to work towards a commitment prior to his senior season.

“Ideally, a commitment would come before next fall – but I’m not going to lock myself into anything. It could be around this time next year – who knows,” Anderson concluded. “I’m wanting to have a decision made as soon as I can, but I have no idea at the moment.”

Tennessee boasts eight of the Rivals Top-250 prospects in-state and Anderson will be viewed as a must-get for the Vols in this cycle.
Click to expand...
-Cain
Likes: Smokey19rt, wwilso29, T Dog and 4 others

Gonna be a huge get for our '22 class
Likes: drvenner, Smokey19rt, T Dog and 1 other person
New posts
You must log in or register to reply here.
<< Tennessee Vols Recruiting Forum
Share: Facebook Twitter Email Link