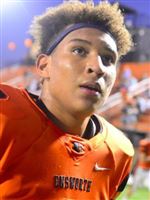 UT offered on 11-4-16: recruiting tweets only - *no discussion* (media/players/coaches only)

UT is the only school to offer to date.
Last edited by a moderator: Jul 31, 2018
Likes: VOLSONLY and Vol Main
V

My son played TN future Stars with Tyler last 2 years. This young man will be a stud by his senior year.
Likes: mrmax86, carolinavol4 and tonybologna

Vol52UT said:
My son played TN future Stars with Tyler last 2 years. This young man will be a stud by his senior year.
Click to expand...
Thanks for the info buddy. :good!:

Hope he stays home. Two years with Pruitt recruiting him. I have a lot of faith

Who is his daddy on the staff?

I got a phone call, saying that his daddy works for the staff, but didnt know who it is.
J

jp1 said:
Patrick Abernathy. Director of high school operations.
Click to expand...
Thank you. Ill sure call and let my friend know.You know, he just may love &#10084;&#65039; Tennessee. He makes Pruitt look like a midget in that pict.:hi:

baron, whose father is patrick abernathy (tennessees coordinator of high school relations), returned to rocky top to visit specifically with pruitt, tracy rocker and brian niedermeyer. The 6-foot-4, 245-pound rising junior walked away impressed  and with a new offer in hand.

id heard a lot of great things about them but i wanted to see for myself actually what kind of people they are and what theyre trying to build at tennessee, baron told volquest.com. we really discussed how i could help tennessee football get back to what its supposed to be. They want to keep a lot of the best players in state and bring back the tradition.

coach pruitt sees my playing tight end or defensive end, baron said. Possibly both for the vols. It was good to hear what he thinks i could do for them and how i could help them. thats what today was all about, he said. i was pretty comfortable with coach (butch) jones and i wanted to see if it felt like the same way. I wanted to see if it was going to really be like family up there.  they were all great guys. It was good.

by the end of saturday afternoon, baron was feeling right at home, and rocker and niedermeyer were already joking about who would get to coach him. The in-state sophomore replaced antonutti, who bumped inside to tackle, at tight end for the tigers and also played a ton of snaps on defense. With two more years of high school ball, baron projects as defensive end in tennessee's new scheme. He said with his quick hands and long arms, pass rushing comes more naturally than playing offense, but im open to playing whatever helps the team.theyre going to have to fight over me a little bit, he said, laughing.

i havent really narrowed it down to any schools but tennessee, with my dad and them being 2.5 hours down the road, thats going to pull on me a lot, he said. just my ties to knoxville.
Click to expand...
- vq
Likes: 5 people

TN would be considered the team to beat for TB imo.

Can confirm UT in driver seat.
Likes: VOLSONLY, OrangeShade, Type Orange+ and 6 others

Tyler is a hard working kid. UT had the inside track with his dad being on staff. He's been with NPA since his dad was working with our program before he got the job under Lyle. He will be a top 100 kid in c/o 20
Likes: 1 person

Big Gucci Sosa said:
TN would be considered the team to beat for TB imo.

de1conley said:
Tyler is a hard working kid. UT had the inside track with his dad being on staff. He's been with NPA since his dad was working with our program before he got the job under Lyle. He will be a top 100 kid in c/o 20
Click to expand...
Is his dad still on staff? I had heard he was let go.
New posts
You must log in or register to reply here.
<< Tennessee Vols Recruiting Forum
Share: Facebook Twitter Email Link