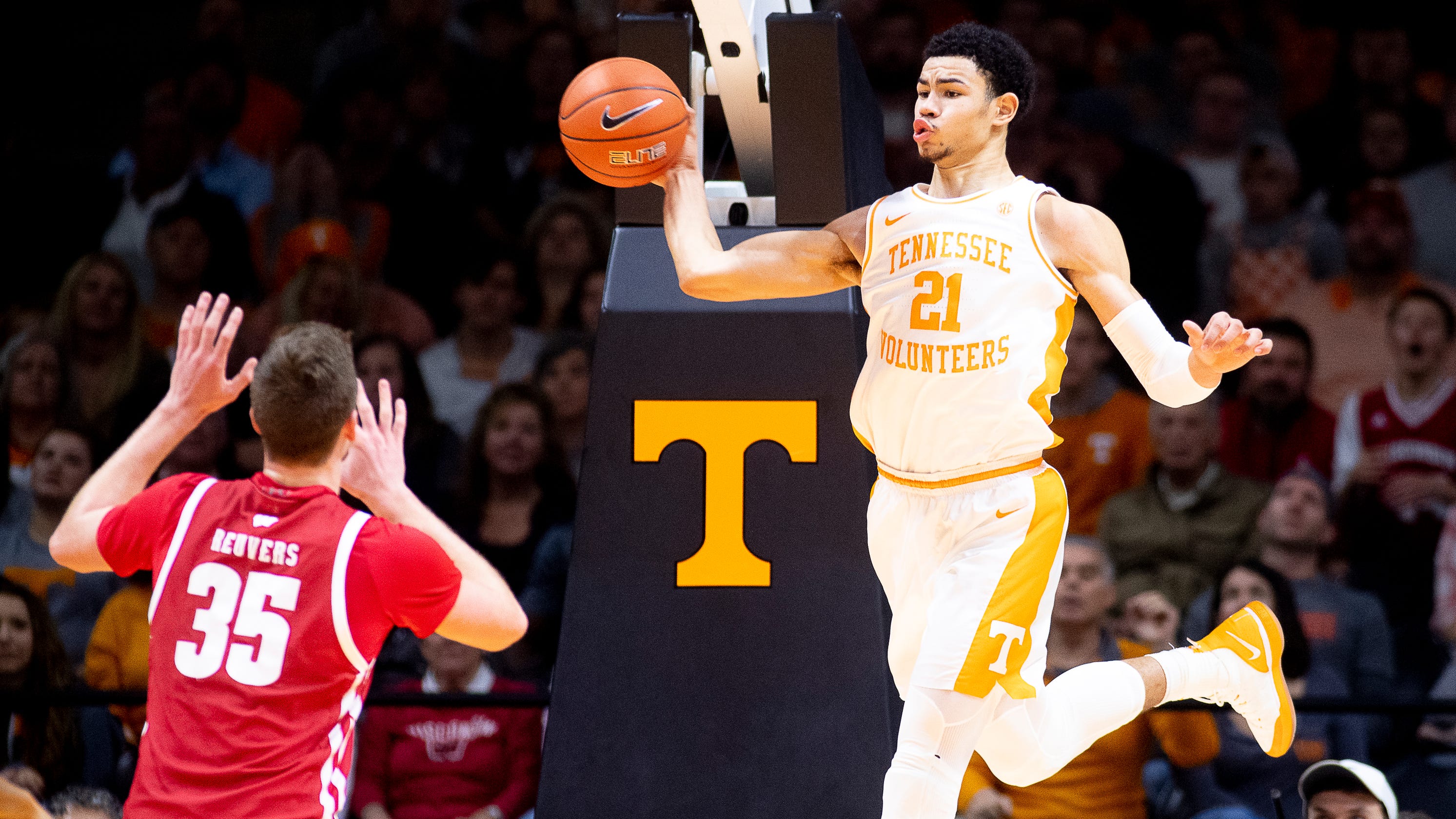 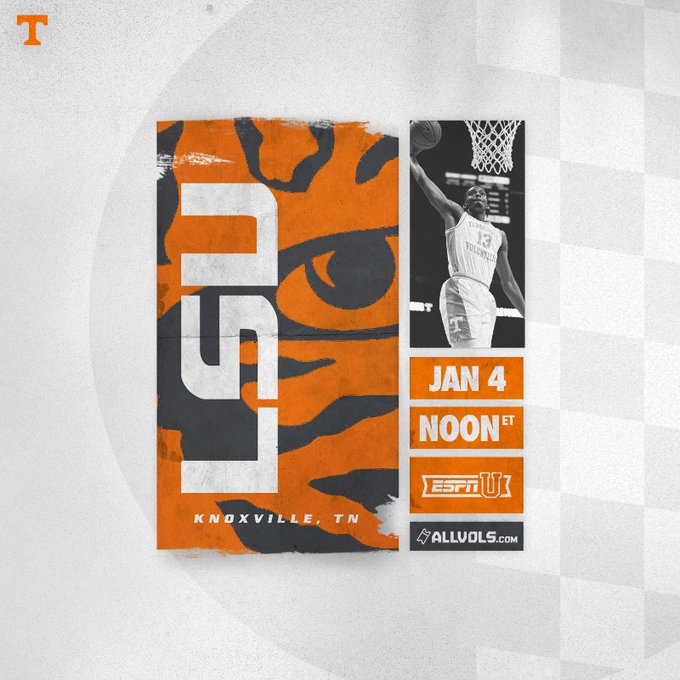 THE SERIES
• Tennessee leads the all-time series with LSU, 65-47, dating to 1933.
• The Vols hold a 31-17 edge when the series is contested in Knoxville and have won four of the last five meetings on Rocky Top.
Likes: sport3500, Jack Burton, ohnnyvol1 and 1 other person

A WIN WOULD...
• Leave Rick Barnes just three wins shy of recording his 100th victory as Tennessee's head coach.
• Make the Vols 3-2 in SEC openers during the Barnes era.
• Extend Tennessee's home SEC win streak to 18 games.
• Give Tennessee a victory its most recent regular-season meeting with every SEC opponent except for Auburn.
Likes: sport3500, VFL49er, Jack Burton and 3 others

STORYLINES
• Third-year LSU head coach Will Wade is a Nashville native and graduate of Franklin Road Academy.
• Wade got his footing in the collegiate coaching ranks as a student manager at Clemson under former Rick Barnes assistant Larry Shyatt.
• In 110 seasons of varsity basketball, Tennessee has had only one letterman from the state of Louisiana: forward Maurice Robertson (New Orleans) in 1996.
• Tennessee has won its most recent regular-season meeting against 11 of 13 SEC opponents. Auburn and LSU are the only teams to hand the Vols a loss in their last regular-season clash.
• Mid-year enrollee Santiago Vescovi arrived in Knoxville on Dec. 28. The freshman guard is awaiting standard SEC and NCAA clearance protocols before he is eligible to compete.
Likes: sport3500, Jack Burton, ohnnyvol1 and 2 others

LAYUP LINES
• Tennessee ranks second in the SEC and eighth nationally in scoring defense, allowing only 58.1 ppg.
• Tennessee posted a 212-133 (.614) record during the decade of the 2010s and made five NCAA Tournament appearances.
• Junior John Fulkerson is shooting a team-best .683 from the field while averaging a career-best 11.6 points per game this season.
• Junior forward Yves Pons has blocked at least one shot in every game this season and tied UT's single-game record with six blocks against Jacksonville State.
• True freshman Josiah-Jordan James leads the Vols with 6.0 rebounds per game. He is the SEC's second-leading rebounder among freshmen.
• Senior guard and preseason All-SEC selection Lamonté Turner announced on Dec. 21 that he will no longer suit up for the Vols due to thoracic outlet syndrome.
Likes: Jack Burton, ohnnyvol1, feathersax and 1 other person

ABOUT LSU
• Like Tennessee, LSU is coming off of an up-and-down non-conference slate that has seen it fall in two of its last three games. Before taking down undefeated Liberty on Sunday afternoon, LSU fell to ETSU, 74-63, and USC, 70-68, in back-to-back games.
• The 2018-19 edition of the Tigers had one of its best seasons in recent years, winning the SEC regular season championship with a 16-2 mark in conference action and advancing to its first NCAA Tournament since 2014-15.
• Third-year head coach Will Wade looks to build off increased win totals in each of the last two seasons.
• Through 12 games, forward Emmitt Williams has been a force down low. The sophomore from Fort Meyers, Florida, is second for the Tigers in points (13.9 ppg) and rebounds (7.5 rpg) and leads the team in blocks (1.3 bpg).
• Senior guard and preseason All-SEC second-team selection Skylar Mays has impressed since taking on his new role as the conductor of the LSU offense. He currently leads the Tigers in scoring (15.8 ppg) and steals (2.3 spg), while averaging just under three assts per contest (2.8 apg), which ranks second on the team.
• Both the Vols and Tigers come into Saturday's game holding 8-4 records looking to gain an early spark as conference play gets underway.
• In 1958 (seven years before the creation of Gatorade), LSU student-athletes were served Bengal Punch, a drink that is believed to have been the first sports drink ever created.
Likes: Jack Burton, ohnnyvol1 and The Dog

Goodness, who the heck was Maurice Robertson? CKO sure had a forgettable tenure.

Click to expand...
Couldn't the UT publicity hacks come up with a more sissy pic of our Fin than that? Somebody should lose their job for distributing that image.
Last edited: Jan 4, 2020
Likes: tnvols72, ohnnyvol1 and feathersax

Thunder Good-Oil said:
Couldn't the UT publicity hacks come up with a more Ghey pic of our Fin than that? Somebody should lose their job for distributing that image.
Click to expand...
I felt it was a good image to use from that game.
Likes: 1985Vols and vols 30

YankeeVol said:
I felt it was a good image to use from that game.
Click to expand...
Yeah, it's fabulous.

It wouldn't surprise me if a holdover from the Flannel Mafia side of the consolidated Athletic Department is behind that.
Likes: Jravol78, UT_Dutchman and feathersax
T

Couldn't help but wonder if in some alternate universe, there's a kid named Bobby McBee...

Couldn't help but wonder if in some alternate universe, there's a kid named Bobby McBee...

This game is going to be brutal
Likes: feathersax and tnvols72
U

I'm afraid you are right 85, still going to watch our team. Go Vols!
Likes: feathersax, LaTechVol, chuckb1448 and 1 other person

I think the BasketVols come away with a nice 65-62 win over LSU
Likes: feathersax and UT_Dutchman

macrovol said:
Vescovi is now eligible.
Click to expand...
No pressure. Just needs to come in and save the season.
Likes: KingtUT, feathersax, ArdentVol and 1 other person

Does anyone know if you can watch the game with an ESPN+ subscription? We don't get U in our cable package.

kiddiedoc said:
Does anyone know if you can watch the game with an ESPN+ subscription? We don't get U in our cable package.
Click to expand...
Nah, I don't think it's included with ESPN+. I think Sling TV, Hulu with live TV, and YoutubeTV. Some of these offer a free trial period which is useful for games like this. I know I might use the trial and get it through YoutubeTV. 14-day trial and is $49.99/mo after that. A lot of people have been recommending it though on here.
Likes: dono

Jack Burton said:
No pressure. Just needs to come in and save the season.
Click to expand...
Lol
V

At this point, I just want to see a more enjoyable game. The last few have been rough to watch the offense. Hopefully Vescovi is able to provide more flow and creativity to the team.

In coach Barnes we trust.

I hope we score before the 10 min mark. If Tn scores more than 24 points in the first half ,they got a chance
New posts
You must log in or register to reply here.
<< Tennessee Vols Basketball Forum
Share: Facebook Twitter Email Link