Cheryl Reeve has 4 rings I'd listen to her
Likes: Rickster, lvocd, VolBalls33 and 1 other person

Congratulations Rennia, I thought you would go in the top 4. You are the best and will do great. As always go Lady Vol’s.
Likes: krichunaka, VolBalls33, madtownvol and 4 others
V

mlindsay said:
I knew they wouldn't take Rennia because of who their head coach is
Click to expand...
I don’t really know anything about her. What’s her beef?

LadyVols_WBK said:
Click to expand...
@Amb3096 they had her number 2 on their draft board and she is excited... i think she may be staying in Minnie
Likes: LadyVols_WBK, ATLVOLFAN01, mlindsay and 1 other person

VA_VOLFAN said:
^ Lynx
Click to expand...
I should probably get that right now that I am a fan!😂 Thanks for the edit!
V

Lucy said:
I should probably get that right now that I am a fan!😂 Thanks for the edit!
Click to expand...
it hurt me to my heart as i am a mystics fan! however I do believe Re is in great hands! sigh.... you sure you don’t wanna be a mystics fan and support Re on the side 🤣
Likes: LVsinceJV, lvocd, mlindsay and 1 other person
W

VolBall09 said:
I was most shocked Indiana drafted Gondrezick over Rennia. Felt almost certain she would go to Indiana if she was available when they came up. My heart started to race when they didn’t draft her.

Looks like there was a ton of emphasis on the 3 point shot in this draft. Makes it interesting that Evans didn’t go higher. I would have drafted her in place of McDonald. They are almost carbon copies but I think Dana wins that battle 1 on 1 and she’s a pure 3 pt shooter. Jasmine walker also obviously went before Rennia due to her 3 point shooting.
Click to expand...
They are not really carbon copies other than that they are quick and short. Evens is a better three point shooter, but McDonald is superior in other areas. Defense especially. Mc Donald is a lock down defender. She is one of few short players who is capable of locking down much taller players in a half court offense. Most short fast and quick players excel in help defense, and making steals. She was Pac 12 defensive player of the year. She has defended Onyonwere effectively before.

Who the player will be capable of guarding at the next level is always a consideration. Sims out of Baylor, had a reputation of being a good defender in college but that did not translate to the WNBA. She was often benched for defensive purposes. Not every short quick player can translate their skill set to the next level. I believe McDonalds defense is what elevated her draft status.
Last edited: Apr 18, 2021
Likes: Remy 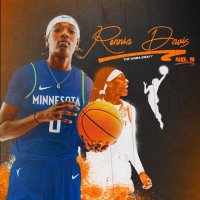 soooo how in the world did she average 40.5 PPG games in HS and did we recruit her?

LadyVols_WBK said:
soooo how in the world did she average 40.5 PPG games in HS and did we recruit her?

Click to expand...
She had that big game against us this season and was the main reason they won as many games as they did. She was always having big games and hitting big shots for W Va. I think she will be fine in the WNBA.
Likes: LadyVols_WBK

Reeve said that she basically replaced Mikiah Herbert Harrigan(traded her to Seattle in the offseason) said she wanted a forward with different skillsets then the ones under contract and she said Rennia was a better ball handler and rebounder the Kiki and was also more ready where Kiki would have took time.
Likes: mlindsay

VolBall09, in hindsight I'm glad Indiana didn't draft Rennia. They never seem to get their act together up there -- sorry, Catch! -- and I'd rather she go where she'll be competing at the top of the standings instead of wondering whether her team will even make the playoffs. That's harsh, I know, but I like the idea of Rennia being in a position to be an important role player for Reeve, a coach who values players who can come off the bench and contribute in whatever minutes they're given. Rennia will have to adjust to that role, but if she is as smart as I think she is, she'll make the most of her opportunity to learn from the more experienced pros while she slowly earns more court time. Sure, she'd have likely played more right off the bat at Indy, but would she grow and learn as much there? Not so sure.
Likes: #1LVLS MAN 4 LIFE, T_Vol376, mlindsay and 2 others

Should have stayed for one more year.

Prophet1 said:
Should have stayed for one more year.
Click to expand...
and do what?

she has a masters degree no need to come back she already gave us 4 years
Likes: ruvol, olddog and mlindsay
New posts
You must log in or register to reply here.
<< Tennessee Lady Vols Forum
Share: Facebook Twitter Email Link