A nomad searching for home 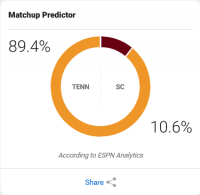 Tennessee hits the road for the rest of the year with a trip eastwards to the sprawling metropolis that is Columbia South Carolina. Shane Beamer himself proclaims this as the greatest environment in college football... and with a straight face, at that. While that may be a steaming pile of cock poop, South Carolina does put together a good environment at the right moments, and a trip from the Vols at 7:00 pm will fit the bill. Somehow, Gamecock fans have a superiority complex against Tennessee fans and think they are equal or better than us due to a nice little run a decade ago as the Vols walked through the darkness. All has been made right, and they are fighting with Kentucky and Mizzou for mid-division irrelevancy... right where they belong, and Tennessee has their sights set on bigger prizes.

1. Rushing Attack: South Carolina gives up a generous 192 yards rushing per game. The Vols rush for 195 per game. Expect both of these numbers to be inflated as Heupel will gash South Carolina to the max to set up deep shots. Oh yes... he will set up deep shots. On the other side of the field, you have former 5* running back Marshawn Lloyd, who is a stud, averaging 5.6 yards per carry. He sat out against Florida with a deep thigh bruise... and those hurt like heck. He will probably be available for action against Tennessee though. Tennessee is stingy with the run. Florida absolutely gashed them with 374 yards rushing. I expect the Vols to get at least 250 on the ground and for South Carolina to have less than half of that.

2. De-Beamer Ball: If you are into drinking games, take a shot every time you here "Beamer Ball" on Saturday, but arrange for your designated driver beforehand. If you are not familiar with the term, coach Shane Beamer's father, Frank, was the long-term coach at Virginia Tech, where he emphasized special teams play. Exceptional special teams play on those teams became known as "Beamer Ball." Today, announcers will fall over themselves at every opportunity to say the phrase as though it were a magic incantation that gave eternal youth. Shane Beamer has kept the tradition alive, and South Carolina is always up to some trickery in the kicking game. They executed a fake punt for a touchdown versus Florida which is swell, because without that, they would have had less than 200 yards of offense. It's simple... expect the trickery, don't let it happen and make them beat you the conventional way.

3. End it Early: I feel like I've got this one on repeat every week, but you can't beat it. When on the road against a hostile environment, leave no doubt who is winning the game as early as possible. If the Vols drop 21 in the first quarter, the fans won't be having it, no matter how much Beamer pumps his arms in excitement. The Vols are number 1 in total offense and South Carolina is 92nd. If the Vols jump out early, you don't need to be a genius to do the math on the chances of victory.

4. Rattle Rattler: It seems like just yesterday that Spencer Rattler was the number 1 quarterback recruit in the nation, arrogantly trashing other quarterbacks at camps and counting his future draft dollars. Well... today he is the starting quarterback at South Carolina, and this year he's thrown for 1,000 less yards than Hooker, 1/3 of the amount of touchdowns, and 9x the amount of interceptions and has a QBR of 44.8. I'll just let that sit there without comment. He's throwing to some fairly average wide receivers. The whole team has 12 receiving touchdowns, which doesn't equal a single Jalin Hyatt. Jaheim Bell is an interesting player at tight end, playing a jack of all trades roll similar to Princeton Fant. All of this being said, Rattler can still make throws, especially if the defensive backs giving him gaping windows to throw within. Look for Tim Banks to dial up the blitz to add to that sweet 2.3 sack per game average SC yields.

It's really hard to imagine a scenario where Tennessee has much trouble here. It would take a lot for South Carolina to put it together, even if Shane Beamer wears his sunglasses at night. They will come out in black, release some hype videos through the week and grasp for anything that gives them hope... and that pretty much sums up Shane Beamer... hope and hype, but not a lot of wins. Tennessee does not have a bad day.

Another dork gets punched in the nose and gets embarrassed.

Carolinas a pile of crap
Likes: drvenner, NeverWe'llSever, InVOLuntary and 8 others

Vols a lot.
Gamecocks a little.
Likes: MockingVol, InVOLuntary, smokeyhuntsgators and 7 others

I think this one is a route. But we put our back ups in and the scoring continues 😂

Orange to the core 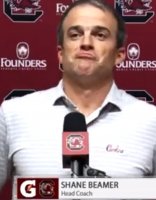 66 10 Vols. ESPN has a hissy fit about running up the score. Beamer does a happy dance when SC scores a TD on 10 walk-ons and a Make-a-Wish kid.
Likes: WilliamDuVOL, MockingVol, Gus D's kernbred and 13 others

AWVOL said:
Beat them chickens!
Click to expand...
Beat them Coc……..nevermind. Not gonna do it.
@Glitch would jump on that way quick.
Likes: Scvol7906 and Glitch

I really think we hit 70 this week. Won't be close. They have no chance of stopping us. We will literally win by fiddy.
Likes: Gus D's kernbred, Smokey19rt, Scvol7906 and 4 others
New posts
You must log in or register to reply here.
<< Tennessee Vols Recruiting Forum
Share: Facebook Twitter Email Link