Hey guys, we still have soccer.
Tonight’s games.
I heard some other channels may also pick up these games. 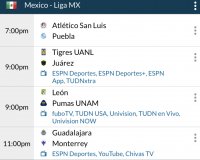 I haven’t watched any Liga MX games before, anybody able to give us a quick refresher about the league?

Here is info on two of tonight’s games.

The Buzz: A lot is at stake in this Liga MX clash as Leon are in second place and Pumas are in fourth. Three points going either way could shake up the table. On Pumas, check out Sebastián Saucedo, a winger who came up in the Real Salt Lake academy and has featured for the U.S. U-20 and U-23 teams. Leon, meanwhile, is led by Ecuador’s Ángel Mena, who has netted 14 goals in the 2019-20 season.

The surprising news is that TUDN, ESPN Deportes and FOX Deportes will all combine to broadcast tonight’s highly-anticipated game that kicks off at 11PM ET/9PM CT. According to a source, the rights are only for tonight’s game against Monterrey. Given the current circumstances with the coronavirus threat and Liga MX being one of the few top leagues in the world that’s still playing, the trio of TUDN, FOX Deportes and ESPN Deportes were offered the opportunity to broadcast the match.

With Liga MX being one of just a few soccer leagues around the world that’s still playing through the coronavirus threat, expectations are that the viewing audience for the game should be huge given that more people are staying indoors in the United States.

Chivas having a home game aired on US television is a huge deal. With Liga MX, TV rights to the home games for clubs are sold on a club-by-club basis. In the United States, Univision/TUDN has the vast majority of the rights except for home games featuring Monterrey, Club Tijuana and Santos Laguna, which are televised on FOX Sports channels. Chivas, historically one of the best supported clubs in Mexico, used to be televised on Univision/TUDN but in 2018, Chivas and Univision Deportes were unable to reach an agreement. And since July 2018, Chivas home games played in Liga MX have not been televised in the United States.

Then in August 2019, TUDN publicly announced their continued interest in acquiring the rights, with TUDN President of Sports Juan Carlos Rodriguez stating, ““We are definitely interested in having a long-term relationship with them and keep building the very important Chivas name in this market.”

SEE MORE: Schedule of Liga MX games on US TV and streaming

While Chivas are not the powerhouse they used to be on the field, the club still attracts a huge fanbase in the United States. The game will also be streamed via Chivas TV, CD Guadalajara’s paid streaming service.

Earlier this year, Chivas struck a deal in Mexico when an agreement was reached between three broadcasters in addition to Chivas TV to share the coverage of Chivas home matches
Likes: knucklehead_vol

It's actually a good league to watch. I don't know much about the league, but it's fun to watch.
Likes: mad4vols

knucklehead_vol said:
It's actually a good league to watch. I don't know much about the league, but it's fun to watch.
Click to expand...
I have heard rumors that the MLS and Liga MX could merge.

mad4vols said:
I have heard rumors that the MLS and Liga MX could merge.
Click to expand...
Eh...not sure I’d like that. Seems like MLS is starting to have a really good hold in America.
Likes: mad4vols

mad4vols said:
I have heard rumors that the MLS and Liga MX could merge.
Click to expand...
I don’t think they will merge, but Liga is nervous about losing it’s stars to MLS.
Likes: mad4vols

mad4vols said:
I have heard rumors that the MLS and Liga MX could merge.
Click to expand...
That would make sense. Bring in the Canadian league too. Have relegation and boom.
Likes: mad4vols

NorCalVol67 said:
I don’t think they will merge, but Liga is nervous about losing it’s stars to MLS.
Click to expand...
This makes sense as well. MLS does need relegation though.
Likes: mad4vols and NorCalVol67

knucklehead_vol said:
This makes sense as well. MLS does need relegation though.
Click to expand...
I agree, but I am not sure it would work financially. I am not sure the support would be there for the 1st division teams.

MLS is becoming too bloated not to have relegation with a solid 2nd tier league.
Likes: mad4vols

NorCalVol67 said:
I agree, but I am not sure it would work financially. I am not sure the support would be there for the 1st division teams.

MLS is becoming too bloated not to have relegation with a solid 2nd tier league.
Click to expand...
Agreed. But are adding teams like Motley Crue added women.
Likes: NorCalVol67

The biggest sporting event in the world today will be....
The Clásico Joven is the name given to the football matches disputed between Club América and Cruz Azul, the two most successful clubs based in Mexico City, Mexico.

This rivalry is comparable to ... Real Madrid vs. Atletico Madrid. On the one hand you have America, the most decorated club in Mexico and CONCACAF. On the other you have Cruz Azul, whose silverware count is also among the best in the country and region.

Cruz Azul vs. Club América
Sunday, 10:15 p.m. (UniMás, TUDN)
This is the big one: first-place Cruz Azul against third-place América, Mexico’s Yankees, at the Estadio Azteca in Mexico City — the colossal soccer cathedral that both teams call home.

Liga MX has announced the league will be suspended after tonight's games.

With Liga MX shutting down later tonight, here are the leagues that are still running and their TV/streaming partner

This could be the last live sporting event for awhile.

Has anyone ever supported a Liga MX team?
I have no ties to any team but if I had to pick one it would probably be between
Cruz Azul, I like the way it sounds when you say it
Or
Club America because it’s my favorite looking logo of all the teams
Or
Maybe Tijuana because I have been there a few times.

I decided during the game I was going to go with Cruz Azul.
As a lifelong supporter it was nice to get the result going into the coronavirus break.
Last edited: Mar 16, 2020

Link to watch in English
https://www.tudn.com/liga-mx-livestream

Very exciting finish, My Team Cruz Azul stopped a penalty at the end.
We got the 3 points and lead the league. 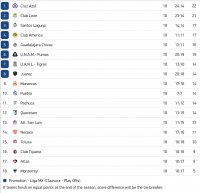