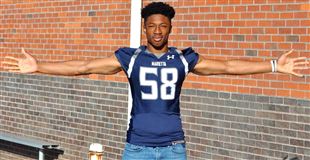 I_Bleed_Orange77 said:
How do you know?
Click to expand...
His brother just committed last cycle.

Azeez Ojulari, Marietta, Outside Linebacker
Click to expand...
So with that Logic why didn't Eli wear Orange?
Likes: k-town_king, Volunteer_Kirby, BowlBrother85 and 5 others
V

Big Gucci Sosa said:
Georgia lock, literally.
Click to expand...
We may have the key to open that lock. Its a long time until 2020 singing day.
Likes: SweetasSoda and McDawg81

His brother's recruiter at UGa is now Our DC, so I would think if it's about relationships, then the good guys may have a chance.
Likes: k-town_king, lynnh, orangebloodgmc and 2 others

Russdaddy2027 said:
So with that Logic why didn't Eli wear Orange?
Click to expand...
Apples & Oranges
Likes: SweetasSoda and KBVol

“(It was) good to talk to the coaches,” said Ojulari, who’s ranked the No. 72 overall prospect and No. 5 weakside defensive end in the industry-generated 247Sports Composite for the 2020 class. “I got to talk to some players. (They were) saying how they’re going to change the program, so it’s something that I could be a part of.”

The 6-foot-3, 216-pound Ojulari said he had heard good things about the game-day atmosphere at Tennessee from teammate Ramel Keyton, a four-star Class of 2019 wide receiver who’s committed to the Vols. And while there was a less-than-capacity crowd at Neyland Stadium for Saturday’s game, Ojulari said he enjoyed the experience. “I heard it was, like, loud and stuff, so I expected it’s not going to be a big game — NC-Charlotte,” Ojulari said. “But I know the SEC games and stuff, the stadium’s going to be packed out.” "I feel like I can be a good fit over there,” said Ojulari.

“I definitely think that they’re headed in the right direction,” Ojulari said. "They have the ability to win games. I just think that they’re just getting there, working their way up, so that’s not really a factor. If I know that they’re building a program, it’s still a good college decision. I mean, most people want to go with the easier route, go to the team that’s already winning,” Ojulari said. “But if you can go to a team that’s building something and you help build it, it’s going to be even more special.”

“I like the stadium,” Ojulari said. "I like the campus and the opportunity. There’s a lot of opportunity there, so that’s a big factor.”
“Probably almost every week, they’re texting me, telling me good luck,” Ojulari said. “Coach Kelly texts me. I talk to Coach Rumph, and I definitely keep in contact with Coach Sherrer. And then Coach Pruitt always texts me on Twitter and on the phone. “(They are) just saying that they need studs and great players to come and change Tennessee back to its former glory.”
Click to expand...
-247

He plans to be back in Knoxville "Very soon with Keyton".
Likes: Woodlawn VOL, kmkemp11, BAKOVOLFAN and 11 others

Visiting for the second time this month. Marietta pipeline? 👀
Likes: SugarCC, Ron Swanson, SweetasSoda and 5 others

Guessing Pruitt will soon be talking about Marietta the way he talked about Grayson for the past 11+ months. SEC MD, interviews, etc.
Likes: SweetasSoda and Bassmaster_Vol

Vols making a move per Simonton
Likes: Type Orange+, wwilso29, SugarCC and 7 others

Big Gucci Sosa said:
UGA lock
Click to expand...
Too many visits to Knoxville for that to be true.
Likes: k-town_king, B-A-Vol, VOLUNTEERSZN and 3 others

Bailey has indicated he won’t reclassify into this year’s class, so the Marietta High standout becomes the foundational face of the 2020 group. He’s teammates with several top targets, namely 5-star athlete Arik Gilbert, 4-star OLB BJ Ojulari and 4-star safety Rashad Torrence. The Vols are trailing Alabama and UGA for Gilbert, but there’s still a long ways to go there. Ojulari’s brother is a freshman at UGA, but BJ attended multiple games at Tennessee this fall and the Vols have some real momentum in his recruitment.
Click to expand...
- VQ
Likes: PA Vol, MoB_MoVols, wwilso29 and 7 others

Would be nice to land this kid. Big win over UGA also
G

A Marietta and Grayson pipeline would turn us around super quick
Likes: SweetasSoda and SugarCC
New posts
You must log in or register to reply here.
<< Tennessee Vols Recruiting Forum
Share: Facebook Twitter Email Link