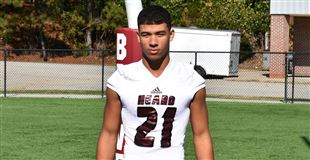 three-star junior safety aaron beasley of heard county high school in franklin, ga., posted friday afternoon on his twitter account that he's planning to visit tennessee on saturday for its first junior day of the year.

The 6-foot, 190-pound beasley received a scholarship offer from the vols on tuesday. Tennessee was one of five teams that extended offers to him tuesday in a matter of hours, along with florida state, kentucky, duke and troy.

This dude is a pure hitter. When he hits runners, they go backward. Seems to have a little bit of Eric Berry in him. Would love to somehow get this guy to sign with the good guys.
Likes: RollerVol and Ron Swanson

Beasley names Vols to his top 3 along with Auburn and Florida State per this article. Would be a huge get for our secondary imo. Also talks about his relationship with Coach Kellt and his visit plans.

Rishvol said:
Swanson'd the Swanson
Click to expand...
No I just effed up the html hashtags and he and the poster above them fixed it real quick. You cant Swanson Swanson

Real quick, this isn't the son of Aaron Beasley who used to play corner for the NY Jets around 15 years ago, is it? He doesn't have a "Jr." to his name, but it is kinda coincidental.

back in late february, aaron beasleys phone wouldnt stop ringing. In a six-day span, the 3-star athlete from heard county (ga.) picked up offers from tennessee, fsu, auburn, west virginia, baylor, georgia tech, duke, ole miss and kentucky. Since seeing his recruitment blow up, beasley has started to visit schools this spring, including tripping to rocky top twice in the last month.

The 6-foot-1, 195-pound athlete attended junior day on feb. 24 and then was back on campus saturday to watch a spring practice. i liked watching how they coached. I liked the energy, beasley said. i liked how they move guys around.

beasley starred at tailback and safety for heard county in 2017, and the 3-star prospect has been in constant communication with the vols since earning his offer last month. According to beasley, tennessee prefers him at safety, but coach jeremy pruitt told me really its whatever position i want to play.

they like my physicality and how i come downhill and hit. They say they aint got nobody on the team who comes down and hits like i do, beasley said. they need that. They need some georgia boys. beasley had the chance to meet defensive coordinator kevin sherrer on saturday, with the former georgia assistant relaying a similar message as coach kelly: its all how bad they want me and want to use me.

while tennessee is among the schools currently recruiting beasley the hardest this spring, the safety is no where near making a decision. The vols are definitely a serious contender though, and beasley will be back on campus for the spring game. im just chilling. Just waiting out, visiting and observing, he said. i was thinking committing midway through my senior season, but ill probably commit on signing day.
Click to expand...
- vq
Likes: 2 people
E

Ron Swanson said:
-247
Click to expand...
Based on a brief clip I just saw, this guy pursues and hits like a monster. Depending how much bigger he gets, I would say safety or linebacker. Hes also a tough runner.

the three-star junior safety from heard county high school in franklin, ga., said tennessee is probably my leader right now following his trip to knoxville last weekend for the vols spring-ending orange and white game, with auburn and florida state also still among his favorites. Beasley initially said theres not really a leader between tennessee, auburn and florida state before pointing to the vols as the team that has started to separate itself from the others. im still just weighing things out, added beasley, whos ranked by 247sports the no. 452 overall prospect and no. 33 safety in the 2019 class.

theyre showing the most love right now, and i feel theyre being real with me and stuff like that, beasley said. and i like coach pruitt a lot, and (safeties) coach (charles) kelly. beasley said he returned to tennessee last weekend for the third time in less than two months because he just wanted to see something like a game-day type atmosphere and just see how the fans are and stuff like that. it was good, beasley said. i like the atmosphere there. It felt good. It was a bigger turnout than i expected. I kind of expected a big turnout because of coach pruitt. The fans wanted to see how he works and stuff like that. I liked the crowd there. It was pretty deep.

i just know that they dont have that many safeties right now, so i can go there and compete for a spot early if i go there, he said. i kind of saw that on the field, and then after (the game) coach kelly kind of showed me. I mean, theyre only going to have, like, two safeties next year before they sign (the 2019 class).

he said he spent the weekend with the vols, arriving friday in time to talk with kelly, his primary recruiter for tennessee. Beasley said he also spoke with some of the vols current players, including cornerback shawn shamburger and safety theo jackson. (shamburger) was real with me, beasley said. he was just like, i aint just trying to pressure you to come here. he was just like, just find the place that best fits you, and stuff like that. But he was like, the coaches are going to make sure youre straight and stuff like that, and theyre good coaches. beasley said tennessee defensive line coach tracy rocker stopped at his school last week on the first day of the spring evaluation period, and he still talks with kelly almost daily. "i love our relationship, beasley said of kelly. i mean, he keeps it real with me, and he tells me how it really is.

before returning to tennessee last weekend, beasley visited florida state for the first time april 14 to attend the seminoles spring game. i mean, i liked it, he said. i liked the atmosphere, too, and the fan base and the coaches. I really didnt get a chance to talk with coach (willie) taggart. I talked with (defensive backs) coach (harlon) barnett and (director of player development) mario edwards.

beasley said one of the main reasons hes high on florida state is that hes a derwin james guy, referring to the former seminoles star safety who was chosen by the san diego chargers on thursday night with the 17th pick in the first round of the nfl draft. But he said james is also one of the reasons he likes tennessee. thats kind of one of the reasons (i like florida state)  to play at the same place he did, beasley said, referring to james. but, at the same time, coach kelly, he coached derwin and jalen (ramsey), so that kind of plays a big role in why i like tennessee.
Click to expand...
-247
Likes: 2 people

up to about 210 now per Calloused Hand
Likes: RollerVol

One prospect Tennessee likes a lot is safety Aaron Beasley, and the 3-star hard-hitter appears primed for a ratings bump this fall. Beasley attended Tennessees spring game and is close with Pruitt and Charles Kelly. UT is battling Florida State and Auburn here, with Beasley likely to make his college choice before his senior season.
Click to expand...
-VQ
Likes: 2 people

On todays podcast VQ mods were really complimentary of Beasley and his film. Talking about how he destroys people, isn't afraid of contact, and also said he could end up playing RB in college. Said UT is evaluating him at both positions because of his physicality. They mentioned that was a theme of all the corners they're recruiting too (Hill, Booth, Fields, etc), all guys who love man coverage and bringing the pain.
Likes: 3 people
N

Ron Swanson said:
On todays podcast VQ mods were really complimentary of Beasley and his film. Talking about how he destroys people, isn't afraid of contact, and also said he could end up playing RB in college. Said UT is evaluating him at both positions because of his physicality. They mentioned that was a theme of all the corners they're recruiting too (Hill, Booth, Fields, etc), all guys who love man coverage and bringing the pain.
Click to expand...
Recall reading an article on him a while back... he mentioned first thing staff loved about him was he is a big time hitter
Likes: RollerVol
B

Wondering if this kid could end up pulling the trigger for us soon? It's basically down to us and Auburn.
Likes: RollerVol

bigorange34232 said:
Wondering if this kid could end up pulling the trigger for us soon? It's basically down to us and Auburn.
Click to expand...