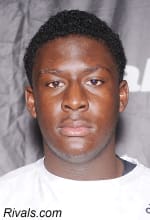 Terrance Ferguson estimates he’s been to Tennessee at least six times since Jeremy Pruitt took over the program. The blue-chip 2021 offensive tackle from Peach County (Ga.) was back in Knoxville again on Saturday, participating in the Vols’ final camp before the dead period. The 6-foot-4, 300-pound rising junior was one of the more impressive lineman at the camp, especially during 1-on-1 drills.

“I felt great today,” said Ferguson, recently ranked by Rivals.com as the nation's No. 49 prospect in the 2021 class. “I love the environment. The atmosphere. The coaching. I felt like I learned a lot and had a great all-around camp.” Ferguson holds early offers from Tennessee, Georgia, Alabama, FSU, LSU, Texas A&M and South Carolina. He’s camped at multiple schools this summer, including with the Tide and Bulldogs.

“I like visiting schools to see how they feel,” he said, “because at the end of the day, every school is going to have great facilities and great academics. Wherever I feel like home, a school that’s going to be truthful to me during the recruiting process, so I know when I get on campus what to expect.”

Ferguson is a versatile lineman, capable of playing guard or tackle at the next level, similarly to a guy like Chris Morris. The 2021 lineman received ample coaching and praise from current UT lineman Trey Smith and Marcus Tatum, as well as individual conversations with Will Friend and offensive coordinator Jim Chaney. “They want to help me evolve my game to the next level,” he said.

With all his trips to Tennessee in the last year, Ferguson keeps coming back because he feels comfortable in Knoxville and has a bond with the staff. He knows he’s priority in the next class, too. “My conversations with coach Pruitt are great. He keeps telling me they’re a rebuilding program but this place is going the right way: Up. He wants me to be a part of that,” he said. “We’ll just see where that goes.”

For now, Ferguson is in no rush to make a decision, and expects he’ll be back to Tennessee for a game or two again this fall. “We’re going to keep taking visits,” he said. “I don’t want to commit so early. I want my family to see everything. I want to experience everything, so when we know I do commit I make the right decision.”
Click to expand...
-VQ
Likes: Easttnken, F0Rt_V0L, FïreBall and 6 others

Safe to say he’ll be in soon 🔒

So why is no one talking about this one? EDIT...just saw '21

“The last time I went to a game, that was last year, so this year I just felt like it was a better experience overall, just for my family in general,” said Ferguson
Click to expand...
“We went to the player hotel where they were staying and just talked, ate with Coach Friend and Coach Sherrer,” Ferguson said. “And then me and the teammate that I went with, we’re friends with Marquez Callaway because he’s from the same area as us, so we went up to his room and we just chilled up there for about an hour.

“I know him pretty well. He’s from our area. He said he just loves it — the atmosphere — and it’s just a great place to come. He said, from the coaches to the players, it just feels like a tight bond, tight family through everything.”
Click to expand...
“(They are) just trying to rebuild the offensive line. And, of course, it has to start with recruiting. They’ve already started. But, of course, they’re saying I would be a great addition to it and to keep it rolling, keep the recruiting rolling for the O-line, and just build and try to get the best O-line in the country.
Click to expand...
“I wouldn’t just base my recruiting off (whether) a team just gets wins and losses. But, of course, winning is always important, so I would say just seeing them bounce back from a loss and being able to come back, prepare, practice that week and then come out big and just change their little, minor mistakes into positives and win, it’s always good to see.”
Click to expand...
callahan
Likes: BucksnortVol, HoleInTheRoof, FïreBall and 1 other person

From @VOLUNTEERSZN re: this kid in another thread...

Last we talked to him was like 2 months ago and he said Tennessee was in his top schools. SC and FSU were the other 2
Click to expand...
Not necessarily doubting we’re in his top three but I always take these comments with a grain of salt when the kid is talking to guys who report to a specific fan base. Very likely the kids include that school just to pander to the fanbase, generate attention likes and follows.
Likes: KokoBVol

Would need to get him back on campus when things open back up. Excellent prospect at guard.
New posts
You must log in or register to reply here.
<< Tennessee Vols Recruiting Forum
Share: Facebook Twitter Email Link