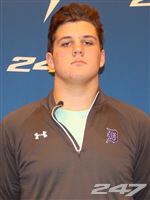 This guys Dad is from Tennessee. Played at Tennessee Tech in the early 70's. We may have a pretty good chance here. One of the top offensive tackles in his class.
Likes: sport3500, orangebloodgmc, TrueVolsGBOInsider and 5 others
O

MidTennVol said:
This guys Dad is from Tennessee. Played at Tennessee Tech in the early 70's. We may have a pretty good chance here. One of the top offensive tackles in his class.
Click to expand...
&#128077;. I admire a man still firing bullets at 50+...
Likes: FranklinVol-615

I played for Coach Ratledge and know some family. I might actually get some inside info..

Vol_sanity said:
I played for Coach Ratledge and know some family. I might actually get some inside info..
Click to expand...
Well, whatever you do, don't post it here. You'll be burned at the stake.
Likes: Bassplayer30074 and BucksnortVol

Kirby had a helicopter ride up to Darlington last week. He hit Marietta, Mceachern, Hillgrove, Rome, and Darlington.
F

snowvols said:
Kirby had a helicopter ride up to Darlington last week. He hit Marietta, Mceachern, Hillgrove, Rome, and Darlington.
Click to expand...
yeah he did the same thing around Gwinnett county. Less than an hour from Athens and he was hopping around from football field to football field

"it made me feel good because i grew up a tennessee fan," ratledge said. "my dad is a die hard tennessee fan so he was really happy about that. He tries to stay even with it to not try to force me to go to tennessee. I know if i went there, that's where he would like me to go the most."

ratledge will be in knoxville soon for a visit. While he grew up wearing a lot of orange, he didn't get to attend a ton of games. "my dad was a coach growing up so he had games and then he would watch film on saturday's," ratledge said. "we never really had time to come up to games. My favorites players are alvin kamara and derek barnett. Growing up, the whole one side of my family is a tennessee fan. We would all get together and watch the games."

at 6-foot-5 and 275-pounds, ratledge is long and athletic. He showcases plenty of physicality in the trenches for the darlington school. He made that move from tennessee to northern georgia in middle school for both athletics and academics. He's focused on becoming a leader heading into his junior season. "we made it to the quarterfinals," ratledge said. "we lost a lot. We lost a lot of our offensive and defensive lineman except for me. Plus our running back is graduating and going to georgia tech."

he's been offered by bigtime schools like michigan and others, but sees himself likely staying in the sec or acc. And while the vols hold a special place for him, he's trying to take a different approach to his recruitment. "everything has become the same to me," ratledge said. "every place is the same except for the coaches and the colors."
Click to expand...
- vq
Likes: sport3500, TN-POSSUM, Vols All Day and 15 others

secking shared this FB post in another thread. Good stuff...

Okay, so of all the pics Tate has taken... - Mary Stuart Ratledge | Facebook
Likes: 4 people

Okay, so of all the pics Tate has taken... - Mary Stuart Ratledge | Facebook
Click to expand...
that was cool swan... thanks
Likes: 2 people

the 6-foot-5, 290 pound prospect is already ranked in the top50 players in the country on 247sports for his class. Ratledge does not do a ton of media, but he did catch up with 247sports this week and discuss recent visits.

Georgia is a school that he has visited many times already and he admits he is high on the dawgs early on. i just like it down there, ratledge said.this trip was different, i got to spend more one on one time with the coaches and watch film. sam pittman is the lead recruiter for the dawgs on this one. we just talk about me keep working and for me to keep coming down there so we can continue to build our relationship, he said.

His most recent visit was to tennessee and it was the first one since the staff changed in knoxville. it was very interesting, i liked meeting all the new coaches, he said. i liked it up there a lot. during that trip he met tennessee ol coach will friend for the first time. i liked him a lot, he was more of get straight to the point type of guy he didnt beat around the bush, he wants me to keep coming back up there, he said.

Before leaving he says he got to sit down with head coach jeremy pruitt. he is new, i liked him, he is very confident on what he is going to get done up there, he said.

Alabama is another school that ratledge has visited several times and he is planning a trip there coming up in a few weeks. they are up there to for me, i have not been there as much as i have to georgia, so i am going over there for two days during spring break, he said. Brent key is the lead recruiter for the tide on the talented offensive lineman and the two have a good relationship already according to ratledge. i think he is pretty good, he has been good to me each time i have been down there, he said.

Going into his junior season, there are no plans on an early decision he says. i dont have any set time, i am going to take my time with it and make sure i make the best decision for me and my family.
Click to expand...
- 247
Likes: kmkemp11, 85SugarVol, highspeed and 1 other person

You don't wanna disappoint your Daddy son......Come on home where you belong.
Likes: orangebloodgmc and BucksnortVol

"I wouldn't say I have any strong leaders yet, but the places I have definitely been the most are Alabama, Georgia and Tennessee. All three are great schools and I am very familiar with each school and the coaches there."

"At Alabama, their players know they are top notch. It is never slow over there and if someone is ever slacking, then another player will get on him to step it back up. They know what they have to do to be the best and I like that a lot. I am in contact with coach [Brent] Key a lot too and we have a good thing."

"Georgia is hungry," said Ratledge. "They are working hard and they have really closed the gap. They want to be where Alabama has been and with their recruiting classes, they look to be close. "The vibe at Georgia is very similar to what it is at Alabama. It is so much alike now at Georgia. They are working very hard, they are getting top players and they are winning."

"I like coach Pruitt a lot. I liked Tennessee when Butch Jones was there and I like Tennessee now, but I am a real fan of coach Pruitt. "I have visited there since he took over and I love his enthusiasm. You can tell the staff is trying hard to get that program where they think it should be. The vibe is definitely a little different there now and I like it."
Click to expand...
- Chad Simmons, Rivals


Ratledge plans to decide around this time next year. Next month he will visit Bama, UGA and Clemson.
Likes: eroller1141@gmail and kmkemp11
G

Tennessee's OL class in '19 and '20 have a chance to BOTH be ELITE. Add Ratledge with the instate kids in '20 to go along with Morris, Lampley and Wright in '19 class and the OL is back to being in the top group of the SEC again.
Likes: TN-POSSUM, orangebloodgmc, UTfan94 and 3 others
G

That's some serious talent right there. And factor in actual coaching and a strength program and all of a sudden we are back to TN football.
Likes: 1 person
N

griddie said:
That's some serious talent right there. And factor in actual coaching and a strength program and all of a sudden we are back to TN football.
Click to expand...
Yep actual coaching to be aggressive and to make them lift weights instead of just stuff their mouth with doughnuts. Also the jinx of Butch gone helps in itself. Seen enough career ending injuries on the OL under him

Always build your OL 1st... The rest will take care of itself
Likes: Vols All Day, JOEY'S ALL VOL !!!, LLcoolDave and 1 other person

Biopsyman said:
Always build your OL 1st... The rest will take care of itself
Click to expand...
OL and DL is where you win football games. Should be a priority every signing class, can never have too many quality linemen.
Likes: orangebloodgmc and Vols All Day

For sure, they are, said Ratledge, who was born in Chattanooga, Tenn., and lived there until he was 4. But Im just trying to give everybody an equal opportunity, not pick any favorites too soon, not cancel anybody out.

Ratledge said he has kind of gotten out of simply following Tennessee as a fan since recruiting started. I look at it as a business decision, kind of  like, where I would like to live without football, where Id like to go, period, he said. I mean, my dad would be the happiest man ever if I went (to Tennessee). But he said hes got his scrapbook. Its up to me where I go. He said wherever I go, hes going to cheer me on.

I like them a lot, Ratledge said. I like (offensive line) coach (Will) Friend a lot. I like Coach Pruitt. I like their energy. Theyre very confident in what they can get done up there.  I like (Pruitt). Hes a really nice guy, and hes very motivated. Hes really motivated to get it going.

Theyve made it pretty clear that Im a priority for them, he said. I mean, I just need to get up there. I had a close relationship with Coach Jones staff, because Id been up there more when he was there. Ive only been up there twice since Coach Pruitt, so Im going to keep on going up there and build relationships with them. I like the new staffs confidence. Theyre very confident. Theyre like, OK, this year might be a little bit rough, but were going to pick it up and get it going. Theyre very confident about it. They all have the same mindset.
Click to expand...
-247

He clearly likes UT but he's also being recruited hard by Bama, Auburn, UGA and South Carolina. Said he's been to each multiples times and talks highly of each school and coaching staffs. He plans to be back at UT this summer.
Likes: TN-POSSUM, Vols All Day, kmkemp11 and 7 others
D

Oline is going to be nice with Wright, Morris, Ratledge, Tucker for 3ish years.

Make your Daddy proud Son. Give him something to brag about to his friends.
Likes: MadWorld and BucksnortVol
New posts
You must log in or register to reply here.
<< Tennessee Vols Recruiting Forum
Share: Facebook Twitter Email Link