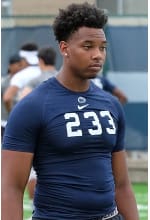 He visited last summer when he was offered, coming back for another visit...

The 6-foot-4, 226-pound Hudgins will be taking his second look at Tennessee. He received a scholarship offer from the Vols in June, when he visited them last summer for the first time. “I got to talk to (defensive line) coach (Tracy) Rocker,” Hudgins told 247Sports' Brian Dohn in August, recalling his first trip to Tennessee. “I got to look around the facilities. They have a lot of famous alumni that went there, like Reggie White and, of course, Peyton Manning. Their facilities are very nice. “Coach Rocker is a straightforward dude. He won’t try to sugarcoat anything. He will tell me what I need to work on rather than trying to sugarcoat it.” Hudgins said Rocker is serving as his primary recruiter for the Vols.

Earlier this month, after Hudgins added an offer from Ole Miss, he told 247Sports' David Johnson that he's intrigued by the opportunity to play in the SEC. In addition to his offers from Tennessee and Ole Miss, he holds SEC offers from LSU and Vanderbilt. "That's where the most competition is, and I love competition," Hudgins told Johnson, referring to the SEC. "In my opinion, it's where the most competition is. I feel like the weather definitely plays a part in that, as well."

He has added offers from LSU, Ole Miss, Nebraska and Purdue since Jan. 2. "I'm interested in everyone right now," Hudgins told Johnson earlier this month. "I don't have one that jumps out the most."

Hudgins also attended a camp in June at Penn State, which is among the other schools showing interest in him. He also told Johnson that he has drawn interest from Arkansas. “I saw the facilities,” he told Dohn in August, referring to his visit with the Nittany Lions. “I loved it. Just the energy there is great. I really liked everything up there. The whole coaching staff was cool and they just showed love.” Michigan State and Maryland both hosted him on visits during the fall, he told Johnson.
Click to expand...
-247
Likes: kmkemp11, AaronUT and HoleInTheRoof

If Steve Spurrier was my neighbor, I would move.

Looking at his tape on Hudl, I am amazed at the overall size of his team and the competition. I always wonder how someone can properly evaluate a player when everyone else is half his size, but he is going up against some big boys.

The four-star Class of 2020 defensive end from St. John’s College High School in Washington, D.C., returned to Tennessee on Saturday to attend the Vols’ junior day, and while he said he currently doesn’t have a list of favorites, “they’d be at the top with a few other schools” if he did. “(Saturday) was great,” said Hudgins, who’s ranked the No. 297 overall prospect and No. 12 strongside defensive end in the 2020 class, according to the industry-generated 247Sports Composite. “Best fan base and atmosphere I’ve been around so far. “Also got to see campus a bit more and talk to more coaches.”

After making two trips to Knoxville, the 6-foot-4, 230-pound Hudgins said he’s already planning to visit Tennessee again in the coming months. “I know I’ll be back down for sure,” he said. “I don’t really have top teams right now, but if I did, they’d be at the top with a few other schools. I love the coaches and atmosphere, and I’m looking forward to coming back.”

“I first saw on social media,” he said. “But during the basketball game they reached a new record in the arena of 22,000. That’s not normal for a basketball game. “It was absolutely roaring in there. Can only imagine what it’s like at a football game.”

The visit also allowed him to explore some of Tennessee’s facilities and spend plenty of time with defensive line coach Tracy Rocker, who’s serving as his primary recruiter for the Vols. Hudgins said he “mainly stuck (with) Coach Rocker most of the time,” and Tennessee again showed plenty of interest in him despite not having a clear vision of exactly which position he might play in college. “I can play four-, five-, six-technique end,” Hudgins said. “Nobody knows how I’m going to end up growing, though.”

More than a dozen schools, including LSU, Maryland, Michigan, Michigan State, Nebraska, Ole Miss, Purdue and Vanderbilt, already have extended offers to him. For now, Hudgins isn’t rushing to decide on a college, and he’s not ready to formally name any top choices. But he admitted he’s intrigued by the opportunity that could await him at Tennessee — specifically, “being able to be the first class that could bring a national championship back to Tennessee. (The Class of) 2020 is special and we could do it,” he said.
Click to expand...
-247
Likes: Geaux_Vols, kmkemp11, RATROD and 11 others

Greg Hudgins picked up a Tennessee offer after a strong showing at camp this summer, and the 4-star defensive end from Washington D.C. made the long trek back to Knoxville over the weekend to get a closer look at the Vols. “I wanted to get down there and meet more people,” Hudgins told VolQuest. “During the camp I didn’t really get to see a lot of the campus or facilities. So it was a good chance to get a feel for the environment. The academics.” After the Junior Day trip, Huggins left Tennessee with a much better understanding of the school and program. The St. John’s College High standout toured the academic center and was also “very impressed” with the atmosphere and fan support during the basketball game. Hudgins, who plans to study sports medicine, psychology or education, really liked how many of Tennessee's facilities — from the Anderson Training Center to Stokely Hall to Thornton Student Life Center — were so convenient and close together.
Click to expand...
“The support is really good,” he said. Hudgins recently picked up offers from LSU and Ole Miss, with Purdue, Maryland, Vanderbilt and Michigan all in the mix, too. Tennessee “really likes” his length, as the 6-foot-4, 230-pound lineman could play end or tackle at the next level. “Nobody really knows how I’m going to end up growing yet either but I’ll most likely play end as a four, five or six technique,” Hudgins said. The 2020 end has no early leaders in his recruitment and may not make a decision until next February, but the 4-star prospect admits he’s very intrigued by Tennessee and really respects defensive line coach Tracy Rocker. “He’s very honest. He’s not afraid to speak what’s on his mind,” Hudgins said. “I appreciate the honesty. A lot of coaches are trying to sell you that you’re the best thing since sliced bread. That’s not always the case. He doesn’t sugarcoat anything. I like that.”
Click to expand...
-VQ
Likes: SmokeyDaBear, RATROD, Easttnken and 4 others

Ron Swanson said:
He visited last summer when he was offered, coming back for another visit...

Looks to be coming w/ teammate Rakim Jarrett on his tour.

Same weekend as Jarrett. I wonder if they can get their two other teammates to come with them. Would be great to get Mekhail Sherman on campus.
Likes: VOLUNTEERSZN, T Dog, Butch Dooley and 1 other person

The 4-star DE is teammates with Rakim Jarrett and visited Tennessee for the second time this spring yesterday. Hudgins isn't doing any interviews right now, but the DC native did tell me he had a great time at Tennessee and has a good idea of his top schools moving forward after his spring break tour of the Southeast.