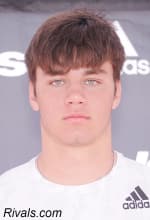 On Tennessee: "I've been talking to a couple of coaches at Tennessee and I'm hoping they offer soon. That would be a big offer for me. They see me as a tight end or a defensive end. I don't have a preference, I'm a little more comfortable on defense because I play that already but I can learn tight end, too. I watched Tennessee play a few games this year and I think the staff just needs some time to get things back on track."
Click to expand...
Visit plans: "I'm going to a junior day at Tennessee on Jan. 26, that's the only thing I have set up really. LSU and Texas want me to come and I think I'm going to visit there soon but I'm not sure when."
Click to expand...
-Rivals
Likes: eroller1141@gmail, FïreBall, SugarCC and 2 others
R

sounds like he's a triple threat...QB, tight end, defensive end...just come into the orange void and let the coaches figure it out for ya...

“It’s a really great school, beautiful campus,” Hazen said of his first trip to see Tennessee. “Coaches were great. Really fun coaches.” Toll spent part of Saturday talking with Tennessee tight ends coach Brian Niedermeyer and head coach Jeremy Pruitt, but the time spent with Niedermeyer wasn’t exactly a hint for where the Vols see him projecting on the field. “I really talked to the tight ends coach a lot,” Toll said, “but he said I could play outside linebacker there. He said I could be a really big part of them making it there.”

“I really want to play d-end,” Toll said, “but I’ll do whatever.” Whatever includes quarterback at the high school level. How do opposing defenses stop a quarterback of his size, exactly? “They just send everybody at my knees,” Toll said. He’s a dual-threat quarterback by default, too. “Well, we don’t make very good pockets,” Toll said, asked if he was more of a pocket passer or a runner. “So I just run around most the time.”

Saturday was Toll’s first time getting to know Niedermeyer, after building his relationship with the Vols through Joe Osovet. “My real strong relationship with Tennessee is Coach Osovet,” Toll said. “Ever since they could contact me, he’s been contacting me.” Toll has offers from Arkansas, Kansas, Louisville, LSU, Ole Miss, TCU and Tennessee. Alabama, Notre Dame and Oklahoma have shown interest, but have not yet offered. He named Arkansas, Ole Miss, LSU, Kansas and TCU as schools he’s heard from the most lately, outside of the Vols.

Asked about the home-state Razorbacks, Toll said his recruitment is open to schools outside the state lines. “I grew up a college football fan,” he said. Toll will either visits Ole Miss or TCU this weekend — “Haven’t decided yet,” he said — and will “probably” be back at Tennessee this summer. “They said they’re really trying to rebuild the program and make it to the national championship level,” Toll said of the Vols. “And they really want me on the team.”
Click to expand...
-247
Likes: Orange Swagger, HoleInTheRoof, FïreBall and 9 others

Ron Swanson said:
-247
Click to expand...
Interesting that his whole hometown is speaking on behalf of him... must have made a HUGE impression

CB to UT from Wiltfong
Likes: Orange Swagger, HoleInTheRoof, drvenner and 13 others

Will UT take 2 tight ends again? Isn't that where this kid projects and then the 2 highly ranked TE's UT is in with seems like they are considering doubling up again this year at the position unless they see the Brown kid moving to DE.

volfaninpa said:
Will UT take 2 tight ends again? Isn't that where this kid projects and then the 2 highly ranked TE's UT is in with seems like they are considering doubling up again this year at the position unless they see the Brown kid moving to DE.
Click to expand...
Sounds like he's just a really good athlete that could play TE, DE or LB. He even plays QB for his HS team. Get him on campus working with Fitz and figure it out later.
Likes: Vol Main, Orange Swagger, FïreBall and 4 others

Logged a 247Sports Crystal Ball forecast in favor of Tennessee regarding Hazen (Ark.) High four-star tight end Blayne Toll. The Vols offered the 6-foot-5, 231-pound Toll in mid-January and had a good visit with him and his parents a couple weeks later.

A source close to Toll believes that the Knoxville-based program is in the driver seat. "It's a great coaching staff," Toll himself added when talking about Tennessee.

Toll has also taken recent visits to in-state Arkansas and Ole Miss. Other offers include LSU and Vanderbilt. 247Sports ranks Toll as the nation's No. 7 tight end and No. 2 prospect overall in the state of Arkansas. He's versatile jumbo-athlete that could also shine on the defensive line on the next level.

Toll made the 247Sports All-American Bowl All-Combine Team in January competing among some of the nation's best inside the Alamo Dome.
Click to expand...
-Wiltfong
Last edited: Feb 20, 2019
Likes: HoleInTheRoof, FïreBall, k-town_king and 11 others

Toll is being compared to Taysom Hill, the former BYU player that plays WR, special teams, and Wildcat QB for the Saints.
Likes: LittleVol, Big Sun, SugarCC and 5 others

BigorangeBoy said:
Toll is being compared to Taysom Hill, the former BYU player that plays WR, special teams, and Wildcat QB for the Saints.
Click to expand...
Sign me up.
Likes: k-town_king

Ron Swanson said:
-Wiltfong
Click to expand...
Greatful for the CB, but using "Knoxville-based program" in place of Tennessee or University of Tennessee just doesn't sound Kosher.
Likes: jdhallvols, BucksnortVol, walkenvol and 3 others

The Artful Dodger said:
Greatful for the CB, but using "Knoxville-based program" in place of Tennessee or University of Tennessee just doesn't sound Kosher.
Click to expand...
Steve is one of the best there is. I didn't even notice the slight, just the good news
Likes: The Artful Dodger, Montrell Hardy and SugarCC

901LookAlive said:
Steve is one of the best there is. I didn't even notice the slight, just the good news
Click to expand...
No complaints on Wiltfong, he has good info, just thought it was a weird way to mention Tennessee.
G

Really like this kid as a TE prospect. Don’t think there are many any better honestly in the class other than Washington.
Likes: GoVolsDR

griddie said:
Really like this kid as a TE prospect. Don’t think there are many any better honestly in the class other than Washington.
Click to expand...
Not even Arik Gilbert? I do think Toll is a very good TE prospect, though.
S

SmokyRiverDog said:
For whom will Blayne toll?
Click to expand...
These jokes are starting to take a toll on me
Likes: SugarCC
S

vols 30 said:
These jokes are starting to take a toll on me
Click to expand...
EZ pass makes it less painful.