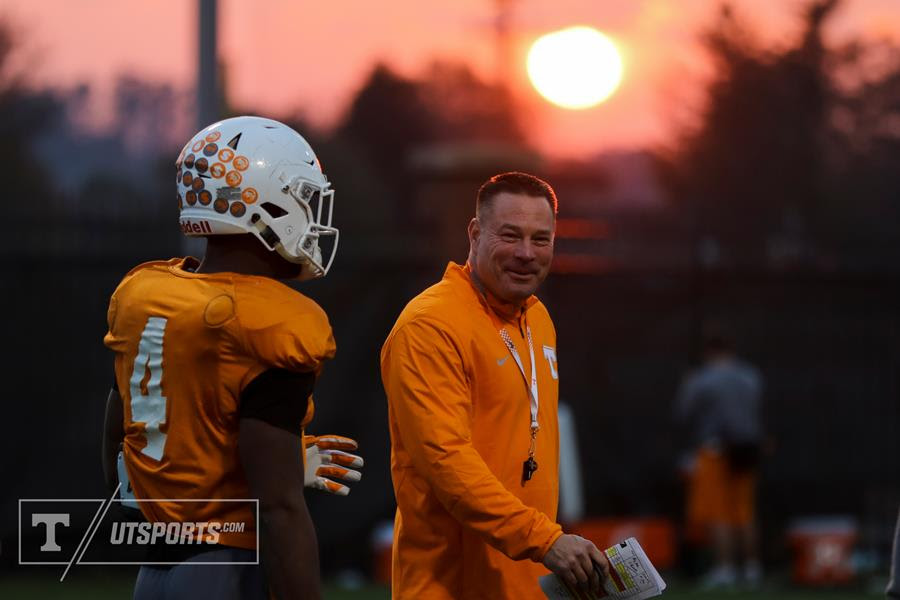 Jones spoke about what this year’s seniors have meant to the program and the seniors discussed what playing for the University of Tennessee has meant to them.

The Vols (7-3, 3-3 SEC) are receiving votes in the latest AP Top 25 and Coaches Poll and are No. 19 in the latest College Football Playoff Rankings. Tennessee will play Missouri (3-7, 1-5 SEC) on Saturday at 3:30 p.m. The game will feature a live broadcast on CBS, featuring the crew of Verne Lundquist, Gary Danielson and Allie LaForce.

On Saturday, the seniors will play their final game at Neyland Stadium. Jones spoke about what this year’s seniors have meant to the Tennessee football program.

“Resolve, resiliency, been through a lot, very high-character individuals, college graduates. You look at what they’ve been able to do and accomplish and so much of it is leaving with rings. These individuals right now have a couple of bowl championships. Those things are very very important, the experiences that they’ve had. They’ve made a lasting impact on Tennessee football. We always talk about, ‘Is Tennessee football better because you are part of it? How have you impacted the football program?’ All of these individuals have impacted the football program in a very very positive manner. You just look at a Cameron Sutton and everything he has brought to the table. He is going to be a college graduate and with the devastating injury, he has worked and willed himself back into playing now. All of those things are very significant. Joshua Dobbs – I kind of had a goal when I look back at that first recruiting class. I said, ‘If we can find our quarterback for the future…’ – this was four years ago – ‘then this was a class that we did well in.’ I just felt that we needed to find the future and the consistency at quarterback and if we could find a couple of impactful players that could impact our program, not only on the field but off the field, then it would be a successful recruiting class. We were able to do that. I’m proud of them for staying. We talked about leaving a legacy and they will definitely leave a legacy when their time ends.”

As a redshirt senior and former walk-on, Folger has experienced a lot over the last five years. Folger earned a scholarship this past August and has already earned a bachelor’s degree in special education. He spoke about the lasting relationships he has formed over the years and how he has enjoyed being one of the elder statesmen among UT’s walk-ons. Folger admitted that he will likely be emotional running through the “T” one final time.

“My dad won’t like this but I’m going to cry like a baby. It’s going to be so emotional seeing my family; my mom, my dad, my brother, my sister down on the field. The five of us being together one last time before we all get going. Come on, asking me questions like that I’m going to get emotional up here. It’s been five years. It’s been the best thing ever. It’s going to be emotional for the last Vol Walk. I think it was my first or second year, there’s a picture that’s still the background on my phone of my hugging my mom at the Vol Walk. She just came of ankle surgery, I think it was my redshirt year, and it was the best thing ever. It’s one of the best pictures I think I’ve ever taken. It’s going to be emotional especially looking back. I got emotional last night watching film from the past four or five years, especially watching my film, watching my guys. Anything from Circle of Life to making tackles against Tennessee Tech. It’s going to be a whirlwind to be honest.”

Like Folger, Bynum has already earned his bachelor’s degree in Recreation and Sport Management. For UT’s SAM linebacker and punter protector, there was never any doubt that he would return for his fifth season on Rocky Top.

“I am an education first kind of guy. I am in graduate school in the Sports Management Department. I didn’t want to leave. I wanted my masters. I work hard and as far as taking hits, I play probably the worst position on the team which is PP or punter protector and I kind of like it. I used to hate it, but now I kind of like being the PP and being out there and controlling.””

As a redshirt senior, Croom has been through both the highs and lows of Tennessee football over the last half-decade. Even with injuries hampering part of his career and consistent playing time, he has continued to improve the program and serve as a leader for Team 120 as he finishes out his final season as a Volunteer.

“I’m not one to be in everybody’s face. I correct things that I see going on, and I really try to lead by example. I don’t want to be out there telling somebody to do something and then I’m not doing it myself. I hold myself to a standard, and then I hold my teammates to the same thing.”