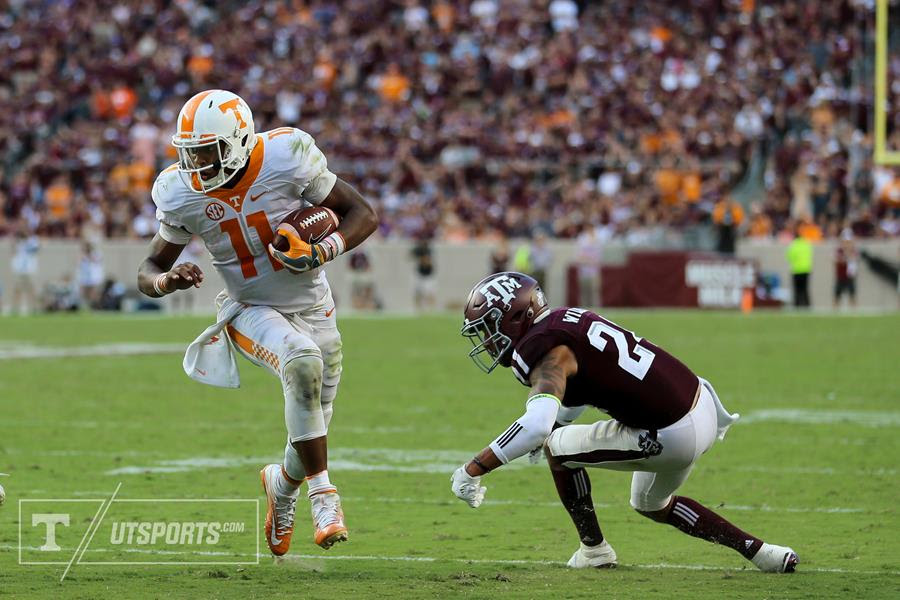 Kamara is in on the Paul Hornung Award Honor Roll for the second-straight week. The Paul Hornung Award, presented by Texas Roadhouse, is annually awarded to the most versatile player in major college football. The winner of this year’s award and his family will be honored on March 7, 2017, at a banquet presented by KentuckyOne Health at the Galt House Hotel in downtown Louisville, Ky.

Kamara enjoyed a record-breaking performance on Saturday in the No. 9/9 Vols’ 45-38, double-overtime loss to No. 8/7 Texas A&M. Kamara rushed for 127 yards and two touchdowns on 18 carries, posted eight catches for 161 yards and one touchdown and added three punt returns for eight yards and one 16-yard kickoff return. His 312 all-purpose yards set a new Tennessee record, breaking the previous record of 294, set by Chuck Webb against Ole Miss in 1989.

Kamara’s three total touchdowns (two rushing, one receiving) were also a career high. He has rushed for two touchdowns in each of the three 100-yard rushing games in his career. He ran for 144 yards and two TDs against Bowling Green on Sept. 5, 2015, in Nashville and had 127 yards and two TDs against North Texas on Nov. 14, 2015, at Neyland Stadium.

Dobbs is on the “Great 8” weekly honors list for the fourth time this season. He was previously honored for Week 2, Week 4 and Week 5.

Dobbs threw for a career-high 398 yards at No. 8/7 Texas A&M on Saturday in College Station, Texas. He was 28-of-47 (both career highs) with one touchdown and two interceptions and also rushed for 57 yards on 17 carries and caught a four-yard touchdown pass.

He led Tennessee (5-1, 2-1 SEC) to 684 yards of offense, which was the Vols’ third-most in program history, second-most in a road game and most-ever against a ranked opponent.