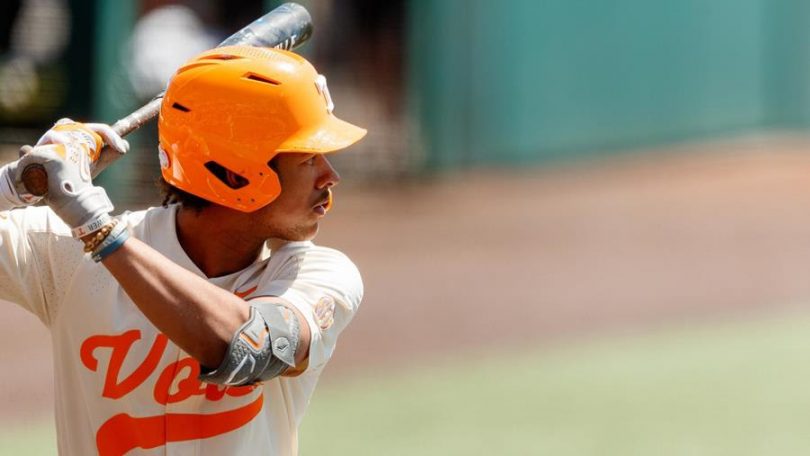 KNOXVILLE, Tenn. – The bats were hot and the pitchers were dealing in top-ranked Tennessee’s 15-4 series-clinching victory against No. 24/24 Alabama on Sunday afternoon at Lindsey Nelson Stadium.

Lipscomb posted his second multi-homer game of the season, launching two long balls and adding a double to drive in five runs while crossing the plate three times himself. Ortega finished with a career-high four hits, going 4-of-5 at the plate with one home run and three singles to go along with a personal-best four RBIs.

The Tennessee bats were hot all day, totaling 15 hits and drawing eight walks in the high-scoring affair. With 15 runs in the game, the Volunteers have now driven in double-digit runs in 17 games this year, including five times in conference play. UT is a perfect 17-0 when scoring at least 10 runs.

On the mound, freshman Drew Beam paced the Big Orange behind a career-best 10 strikeouts with no walks to improve his record to 8-0 on the year. He allowed three runs on four hits in 6.2 innings pitched. In total, UT struck out 14 batters and allowed just six hits to prevent the Crimson Tide (23-14, 8-7 SEC) from gaining any momentum.

Alabama struck first in the game, as Drew Williamson turned on a pitch in the opening frame that stayed in the air just long enough to get over the right field wall and give the Crimson Tide an early 1-0 lead.

Tennessee pulled back ahead thanks to a four-run second inning. With two outs, Evan Russell drew walk, Christian Moore floated a single into right field and Luc Lipcius walked to load the bases. Cortland Lawson capitalized on the moment, roping a ball to the left-center gap that one-hopped the fence for a ground-rule double to bring in a pair of Vols. Seth Stephenson and Ortega each added RBI infield singles to make it a 4-1 game.

The Tide got one run back in the top of the third when Jim Jarvis homered to right field, but the Vols responded in the fourth with a three-run bomb from Ortega that cleared the center field fence to extend the Volunteer lead to 7-2. Once again doing damage with two outs, Lawson reached on a walk and Stephenson singled to set up Ortega’s third hit of the game and seventh home run of the season.

UT struck again the next inning, as Lipscomb ripped a solo shot to right center to make it an 8-2 game. Alabama returned the favor in the top of the sixth, when Zane Denton crushed a ball over the right field bullpen.

Lipscomb’s day wasn’t finished, as the senior blasted his second home run of the game over the center field fence to make it an 11-3 game. Ortega and Jordan Beck scored after reaching base on singles.

Beck continued the offensive display in the eighth, sending a no-doubter sailing over the left field porches to extend the Vols’ advantage to 13-3. Lipscomb recorded his third extra-base hit of the game, narrowly missing his third homer, with a double off the top of the padding in right-center field in the eighth.

UP NEXT: Tennessee hosts Bellarmine Tuesday, April 19 for a 6:30 p.m. contest at Lindsey Nelson Stadium. The Vols then travel to Gainesville for a series with the Florida Gators next weekend.

Vols Stay Hot: With the win Sunday, Tennessee improved to 14-1 in SEC play and won its fifth straight series against conference foes. The Vols joined elite company with their 14-1 SEC start, becoming just the sixth team all time to achieve that feat. Vanderbilt was the last team to do so in 2013, while the first program to ever do it was the Big Orange in 1951. That squad was the only one ever to start 16-1 in SEC play.

Lipscomb Lasers: Trey Lipscomb had another huge day at the plate on Sunday, crushing two balls for home runs and narrowly missing a third by a matter of inches that ended up as a double. He finished with five RBIs and three runs on 3-of-5 hitting for the day. On the year, he boasts a team-leading 15 home runs and 57 RBIs, and he’s driven in at least five runs in three games this season, while no other Vol has done so more than once.

Ortega’s Career Day: Redshirt sophomore Jorel Ortega was on fire in the batter’s box, going 4-of-5 from the plate with one home run and three singles while driving in four runs. Ortega’s four hits and four RBIs both marked career highs.

10 Ks for Beam: Drew Beam was dealing all game, as the freshman struck out a career-high 10 batters. He fanned multiple Crimson Tide batters in four innings on the day to keep Alabama in check.

Cool, Calm, Collective: Tennessee found success with two outs on the board all game, scoring 10 of its 11 runs during the pressure situations. The Vols rattled off six hits with two home runs, three singles and a double while drawing five walks with two outs. Jorel Ortega led the way, driving in four runs thanks an RBI single in the second and a 3-run homer in the fourth.