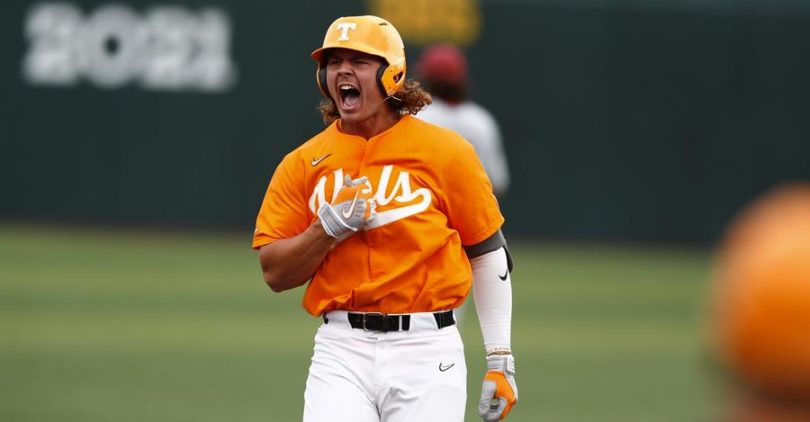 Jordan Beck was tremendous at the plate for Tennessee (32-3, 13-1 SEC) going 2-for-3 with both of his hits being home runs. The right fielder totaled three RBIs and posted the fourth multi-homer game of his career. Beck now has 25 big flies in his UT career.

After Vols’ starter Chase Dollander was taken out of the game after being struck by a line drive in the first inning, Camden Sewell came in and logged a big-time outing out of the pen. Making his 60th appearance in a Tennessee uniform, Sewell fired 4.1 innings and threw over 70 percent of his pitches for strikes en route to his fourth victory of the season. Redmond Walsh closed out the win in style, striking out four hitters in two innings of work.

Tennessee quickly scored its first run of the game in the bottom half of the first as Beck cranked a two-run blast to dead-center to put the Vols up 2-0 in the opening frame.

The Vols struck again in the third when Jorel Ortega collected his second hit in as many at bats, a triple to the wall in right. Drew Gilbert ripped a liner to right field that hung up just long enough to be caught, but was deep enough to add a third Big Orange run to Tennessee’s tally via a sacrifice fly.

Alabama countered in the top of the sixth, getting a two-run homer from Zane Denton that just barely cleared the short wall into the Tennessee bullpen, cutting the UT lead to one.

Tennessee responded immediately by pushing three runs across in the bottom of the frame, starting with Beck’s second homer of the game, a towering shot to the power-alley in left center. Luc Lipcius added a blast of his own to the opposite field on a 3-2 count later in the inning before Evan Russell raced home on a throwing error by the catcher to give the Big Orange a 6-2 advantage heading into the seventh inning.

Three of UT’s final four runs would come via Crimson Tide errors, as Russell, Gilbert and Christian Scott all scored after stealing third and coming home on an overthrown ball from Alabama’s catcher.

The Vols and Tide will square off at 1 p.m. tomorrow in the rubber game. The contest will be streamed on SEC Network+ / ESPN app.

400 Ks
After punching out nine Tide hitters, Tennessee increased its season strikeout total to 407. Entering the weekend, the Vols were second nationally in strikeouts, trailing only Florida State.

TREY REACHES TRIPLE-DIGITS
Third baseman Trey Lipscomb collected his 100th total base of the season Saturday afternoon. The senior went 2-for-4 at the dish and entered the game with 99 total bases. Before the weekend started, Lipscomb had the 14th-most total bases in the country.