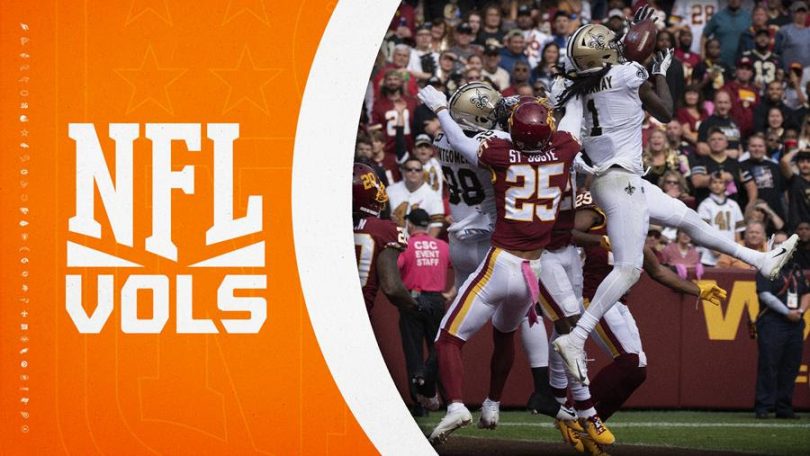 Marquez Callaway registered two touchdown catches in an emphatic win over Washington to secure a strong weekend of performance from Vols in the NFL.

Teammate Alvin Kamara scored his first rushing touchdown of the season and made 16 carries for 71 yards. The veteran tailback added 51 yards on five catches and an aerial score.

Jalen Reeves-Maybin forced and recovered a fumble late in the game against Minnesota. The stop allowed Detroit to score the go-ahead touchdown, but the team fell for the second-straight week on a last second field goal.

Cordarrelle Patterson continued his strong season, recording 54 yards rushing and 60 receiving. He and teammate Dustin Colquitt, who was signed to the 53-man roster and assumed the punting duties this week.

A pair of VFLs were signed to practice squads last week as wide receiver Josh Malone inked a deal with the Denver Broncos. Bryce Thompson rejoined the New Orleans Saints as a member of their practice squad.

Marquez Callaway – WR – Saints
Made four receptions for 85 yards and two touchdowns, including a 49-yard hail mary to end the first half in a 33-22 win over Washington

Dustin Colquitt – P – Falcons
Punted twice, one downed inside the 20, against the Jets in London, England

Jauan Jennings – WR – 49ers
Did not play against Arizona

Alvin Kamara – RB – Saints
Scored his first rushing touchdown of the season and had 71 yards on 16 carries. Also made five catches for 51 yards and a receiving touchdown

Michael Palardy – P – Dolphins
Made four punts, one inside the 20, for 154 yards against Tampa Bay

Cordarrelle Patterson – WR – Falcons
Had a season-best 14 rushes for 54 yards and made seven catches for 60 yards in a 27-20 win over the Jets in London, England

Jalen Reeves-Maybin – LB – Lions
Forced a fumble and recovered one late in the game against Minnesota while adding four tackles in his first start of the season. Ranked by PFF as the fifth best performance of the week