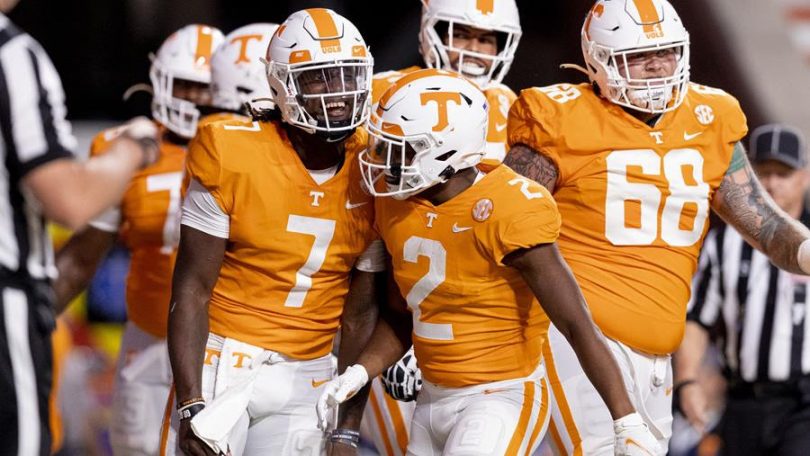 KNOXVILLE, Tenn. – After starting the Josh Heupel era with a convincing victory over Bowling Green last week, Tennessee will look to keep things rolling as it welcomes Pittsburgh to Rocky Top for a noon showdown at Neyland Stadium on Saturday.

Saturday’s matchup between the Vols and Panthers has been dubbed the Johnny Majors Classic, named in honor of the late legendary head coach for both programs.

Saturday’s game will be televised on ESPN with Dave Pasch (PxP), Dusty Dvoracek (analyst) and Tom Luginbill (sideline) on the call. Kickoff is slated for 12:02 p.m. ET.

Fans can also listen to Tennessee’s official radio broadcast on the Vol Network (WIVK-FM 107.7/WNML-FM 99.1) and satellite radio (Sirius Ch. 135, XM Ch. 191, Internet Ch. 962). A live audio stream of the broadcast will also be available on UTSports.com​ and the Official Gameday App.

For the most up-to-date information on Tennessee’s 2021 gameday policies, please visit the Tennessee Football Gameday Information page on UTSports.com. Some important information is also listed below.

Tickets and Parking
Fans with digital tickets and/or parking are encouraged to download their ticket(s) and parking to their phone prior to arriving at the gate or parking lot. Fans still interested in purchasing tickets to the game can visit AllVols.com or click HERE. The ticket office will open three hours prior to kickoff on Saturday (9 a.m.).

Fan Experience Upgrades
As we enter the 100th season at Neyland Stadium, Shield-Watkins Field, Tennessee Athletics has unveiled several new, exciting fan experience enhancements for the 2021 football season. Among the new gameday enhancements are new LED stadium lights, ungraded fireworks and “I Will Give My All” signs throughout the stadium.

More info on all of the new gameday enhancements can be found HERE.

“I Will Give My All”: As fans make their way to their seats, they can participate in a similar tradition as the Volunteers who take the field. “I Will Give My All” signs have been installed above the portals entering each section of Neyland Stadium. Just as the team is reminded to “Give My All” before running through the T pregame, each fan entering the stadium is encouraged to do the same.

Vol Village: Make sure you visit Vol Village presented by Toyota for a whole new fan experience. It’s FREE for all fans with or without a game ticket. There will be live music, activities for everyone of all ages, food trucks, and more. Vol Village, located in a great spot to see the Vol Walk and the Band March is just across from Circle Park. The Toyota Vol Village on Sept. 11 will feature musical artist Halle Kearns, face painters, 9-11 memorial activities, tailgate games and much more! Fans can stop by from 8:30-11:30 a.m.

Truly’s Tailgate: Truly’s Tailgate, located outside Gate 9 will open at 9 a.m. and stay open through the end of the third quarter. Any fans with tickets to the game can stop by for food and drinks during that time.

Johnny Majors Classic
When Tennessee and Pitt meet on Saturday, they will pay tribute to a shared gridiron icon as the two programs announced the game’s designation as the Johnny Majors Classic, named in honor of the late legendary head coach and player. UT and Pitt will reciprocate the event on Sept. 10, 2022, when they meet at Heinz Field in Pittsburgh. Majors served two tenures as head coach at Pitt, doing so from 1973-76 and 1993-96. He spent 16 seasons as head coach of his alma mater of Tennessee from 1977-92. In total, he produced a 185-137-10 record in 29 seasons of coaching.

Vols Open Heupel Era with Win
Tennessee racked up 331 yards on the ground and cruised to a 38-6 victory over Bowling Green in its season-opener last Thursday in Neyland Stadium. Josh Heupel improved to 4-0 in season-openers as a head coach. Running backs Tiyon Evans (120) and Jabari Small (117) each rushed for over 100 yards, while defensive back Theo Jackson had career highs in tackles (11), tackles for loss (2.5) and pass breakups (3). The Vols scored touchdowns on their first two drives and outscored the Falcons 24-0 in the second half.

Non-Conference Success
The Vols have won 20 out of their last 24 games against non-conference opponents dating back to the start of the 2015 season. UT has won four in a row over non-SEC foes, having outscored them 136-70 during that span. Josh Heupel is 9-3 in non-conference games as a head coach, including 8-3 mark in three seasons at UCF.

Big Game in Neyland
Pitt is the first non-conference Power 5 team to visit Neyland Stadium since Oklahoma defeated the Vols in a 31-24 double-overtime thriller on Sept. 12, 2015. It’s the first time that UT will face an ACC team in Neyland since beating Duke, 23-6, on Nov. 1, 2003. The Vols have won their last two games against ACC foes – Georgia Tech (2017 in Atlanta) and Virginia Tech (2016 in Bristol).

Panthers lead series, 2-0
Tennessee and Pitt are meeting for the first time since Sept. 3, 1983, when the Panthers won 13-3 in Knoxville. The other meeting occurred in 1980 in Knoxville, and Pitt captured that meeting as well by a score of 30-6.

Johnny Majors was the Vols’ head coach for both of those meetings against his former Pitt team that he led to a national championship in 1976.

Pitt opened its season with a 51-7 blowout win at home against UMass last Saturday. Veteran signal caller Kenny Pickett threw for 272 yards and two touchdowns in the win to become just the fifth player in Pitt history to eclipse 8,000 yards passing. The redshirt senior quarterback was named to the preseason watch lists for the Maxwell, Davey O’Brien, Johnny Unitas Golden Arm and Manning awards, and ranks second in program history with 8,863 yards of total offense.

The Panthers are coached by Pat Narduzzi, who is in his seventh season leading the program. Since 205, Narduzzi has directed Pitt to 29 victories in ACC play, the fourth-highest win total during that span. The Panthers trail only Clemson (46), Miami (32) and Virginia Tech (30).

Pittsburgh features a tough and physical defense that is known for getting after the quarterback. The Panther’s pass rush perennially ranks among the nation’s best. Pitt compiled 97 sacks over the 2019-20 seasons, the highest total in the country over those two years. Pitt had five sacks in its season-opening win over UMass, led by redshirt senior linebacker John Petrishen, who finished with two sacks and a team-high six tackles.