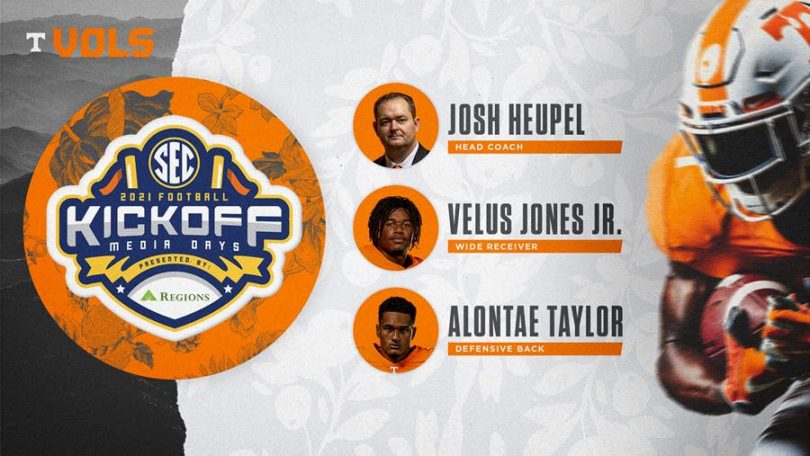 HOOVER, Ala. – The unofficial start of football season has arrived for Tennessee and first-year head coach Josh Heupel as the Volunteers take their turn at SEC Football Media Day on Tuesday at the Hyatt Regency Wynfrey Hotel.

Heupel will be joined by senior defensive back Alontae Taylor and senior wide receiver Velus Jones Jr. After a year absence due to COVID-19, SEC Media Days returns with live coverage all day on SEC Network.

Heupel will join via phone on SEC This Morning with Peter Burns and Chris Doering at 9:20 a.m. ET. He is scheduled to appear on ESPN SportsCenter in the 11 a.m. ET hour prior to taking the main stage at 11:30 a.m. ET on SEC Network. Live coverage continues with Heupel on the SEC Network set at 12:35 p.m. ET.

A versatile receiver and dynamic return specialist, Jones Jr. elected to return for his sixth season at the collegiate level and second with the Vols in 2021. Last season, he played all 10 games with six starts, ranking third on the team in receptions (22) and receiving yards (280) while finishing second in receiving touchdowns (three). Jones Jr. enters the 2021 season as the FBS active leader in kickoff return yards with 2,345.

One of Tennessee’s defensive leaders on and off the field, Taylor has played 33 games with 19 starts since 2018. The senior from Manchester, Tennessee, has racked up 102 tackles, four tackles for loss, 11 passes defended and a pair of interceptions over the past three seasons. He was selected to the 2020-21 SEC Football Leadership Council and serves as vice chair.

The Vols open their first preseason camp under Heupel on Aug. 4. The 125th season of Tennessee football and the centennial celebration of Neyland Stadium begins on Thursday, Sept. 2, as the Vols host Bowling Green in a special SEC Network kickoff slated for 8 p.m. ET.

Single-game tickets, mini-plans and season tickets are on sale now at AllVols.com.