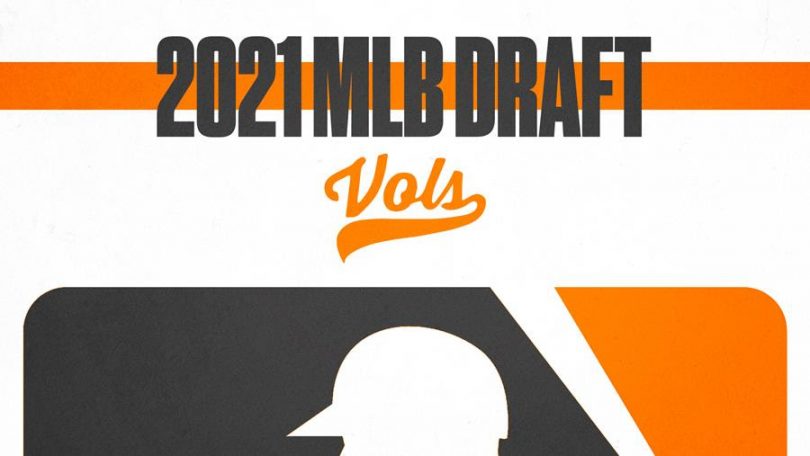 KNOXVILLE, Tenn. — Five Tennessee players were selected on Day 2 of the 2021 Major League Baseball Draft, which consistent of rounds 2-10.

Chad Dallas, Liam Spence, Max Ferguson, Connor Pavolony and Jake Rucker all had their names called on Monday afternoon. The five picks are the most in program history through the first 10 rounds of an MLB Draft, breaking the previous record of four (2019, 2005, 2001).

Dallas was the first Vol off the board as the Toronto Blue Jays selected him in the fourth round with the 121st overall pick. He is the seventh Tennessee player to be picked by the Blue Jays and the first since J.P. Arencibia back in 2007.

Spence was next, becoming the first of two Vols to hear their names called in the fifth round. The Australian was taken with the 154th overall pick by the Chicago Cubs, making him the seventh player to be drafted by the franchise in program history and first since Zack Godley in 2013.

Spence’s middle infield partner Ferguson was taken six slots later with the 160th overall pick by the San Diego Padres. He is just the third Vol to be drafted by the Padres and first since Chase Headley and Josh Alley were both selected by San Diego in 2005.

Pavolony was the first of two Vols to go in the seventh round as the Baltimore Orioles selected him with the 197th overall pick. UT’s veteran catcher is the first player to be picked by the Orioles since Augie Ojeda in 1996 and just the third Tennessee player overall to be drafted by Baltimore.

Rucker rounded out Monday’s selections, going to Minnesota with the 219th overall pick. The Vols’ clutch-hitting third baseman will join former teammate Alerick Soularie in the Twins farm system and is the seventh UT player to be drafted by Minnesota.

The 2021 MLB Draft will conclude tomorrow with rounds 11-20. Coverage on MLB.com will begin at noon ET.

More information on the each of Tennessee’s 2021 draft picks can be found below.

Dallas had a breakout junior year as Tennessee’s Friday-night starter. The junior right hander finished the year with an impressive 11-2 record while leading the team with 122 strikeouts. His 11 wins were tied for sixth most in the country and also tied for the sixth most in a single season in program history. His 122 punchouts rank sixth in program history for a single season, as well, and were the most by a Vols’ pitcher since James Adkins had 133 in 2007.

The Orange, Texas, native earned a handful of postseason honors in 2021, including All-America recognition from the ABCA (second team) and the NCBWA (third team). Dallas was also a first team ABCA/Rawlings Southeast All-Region selection. During his two seasons in Knoxville, Dallas finished with an incredible 14-2 record and posted a 3.91 ERA over 21 starts (124.1 innings pitched).

Spence was the catalyst for the Vols’ lineup throughout the year after taking over as the team’s leadoff hitter early in the season. The senior shortstop led the SEC with a .472 on-base percentage and 54 walks while leading the team with a .336 batting average and 63 runs scored. Spence also finished the year second on the team with 82 hits and reached base in 50 consecutive games to start the season.

The Geelong, Australia, native was a first-team All-SEC selection at shortstop and was also named to the SEC All-Defensive team. Spence earned third team All-America and first team Southeast All-Region honors from the ABCA, as well. He was also named to the midseason watch list for the Golden Spikes Award.

Ferguson, a 2021 ABCA Southeast All-Region selection who was one of the Vols’ most productive players in the second half of the season, helping lead Tennessee to its first College World Series appearance since 2005.
The junior infielder started 67 games (primarily at second base), ranking fourth on the team with 46 runs scored, 12 home runs and 46 RBIs, all career highs. The Florida native also led the team and ranked fifth in the SEC with 15 stolen bases, showcasing his elite speed and athleticism.

Ferguson was named to the SEC All-Tournament team, as well, after helping lead the Big Orange to the tournament championship game for the first time since 1995. He batted .316 with a pair of doubles, a home run and a team-high five RBIs during the Vols’ five games in Hoover.

Pavolony earned a reputation as one of the top defensive catchers in all of college baseball while also proving to be a productive hitter during his three seasons with the Vols. Despite a slow start to the 2021 season and having to battle through a hand injury suffered midway through the year, Pavolony still managed to set career highs in runs scored (29), hits (40), doubles (seven), home runs (seven), RBIs (26) and stolen bases (five) while starting 46 games behind the plate. He also threw out nine runners attempting to steal on the year.

Rucker has been a staple in Tennessee’s lineup since his freshman year in 2019, when he helped lead the Vols to their first NCAA Regional since 2005. A career .311 hitter, Rucker has been one of the most reliable and consistent players for UT throughout his time on Rocky Top.

The Greenbrier, Tennessee, native had a career year in 2021, starting 67 of UT’s 68 games as the team’s primarily third baseman while setting career highs in runs scored (48), hits (90), doubles (21), triples (two), home runs (nine), RBIs (55), walks (27) and stolen bases (seven). Rucker’s 90 hits led the team and were tied for seventh nationally at season’s end. His 21 doubles also led the team and were the second most in the SEC.

Rucker was named a third-team All-American by Baseball America and Collegiate Baseball News while also earning first team Southeast All-Region honors from the ABCA and first-team All-SEC recognition in 2021.