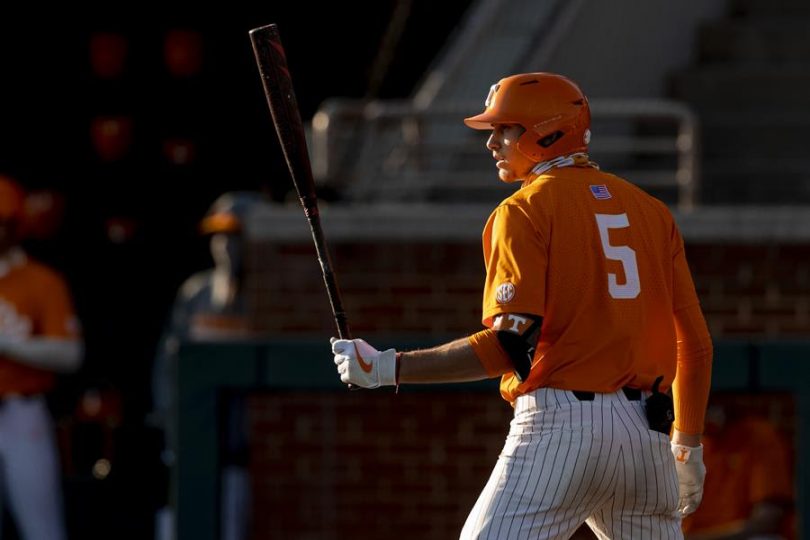 TUSCALOOSA, Ala. – No. 6 Tennessee got production up and down the lineup to come away with a 9-8 victory and another series win at Alabama on Sunday afternoon.

The Vols scored in six different innings and finished the day with 15 hits, their most in an SEC game this season.

Freshman right hander Blade Tidwell earned the win to improve to 4-1 on the year despite not having his best stuff. The Loretto, Tennessee, native had five strikeouts but also allowed five runs (four earned) in 5.1 innings of work.

Sophomore lefty Kirby Connell was big out of the bullpen once again, striking out five batters in three innings. Sean Hunley picked up Connell in the ninth, recording two high-pressure outs to earn his third save of the year.

Neither team wasted any time getting the bats going on Sunday with three runs apiece in the first inning. Beck and Lipcius both had RBI singles in the top of the first to put the Vols ahead 3-0, but Alabama answered right back with three runs on four hits in the bottom of the inning.

The Big Orange jumped back in front with two runs in the third and another in the fourth, getting a pair of RBI walks from Lipcius and Drew Gilbert to score two of those runs and make it a 6-4 game.
The Crimson Tide punched back once again in the bottom of the fourth with a solo home run by Owen Diodati to cut the Tennessee lead to one run.

Tennessee scored in the sixth, seventh and eighth to take a 9-5 lead, but the Tide did not go down without a fight, as they pulled within two runs on a two-run homer from Sam Praytor in the eighth and scratched across a run in the ninth before Hunley got Drew Williamson to ground out to strand the tying run at third base.

The Vols return to Knoxville for four home games this week, hosting Eastern Kentucky on Tuesday before a big series against Florida next weekend.

BEST STARTS SINCE: With Sunday’s win the Big Orange improved to 7-2 in SEC play this season, their best start to league play since 2001 when they were 8-1. UT has also won its first three conference series for the first time since that 2001 season. The Vols have won both of their SEC road series, as well, marking the first time they have done that since 2005 (Auburn and Kentucky).

MULTI-HIT VOLS: Five players had multi-hit days on Sunday (Liam Spence, Jake Rucker, Jordan Beck, Luc Lipcius, Logan Steenstra). Rucker, Beck and Lipcius had three hits each while Lipcius also drove in three runs for the Vols. Tennessee’s 15 hits on Sunday are its most in an SEC game this season.