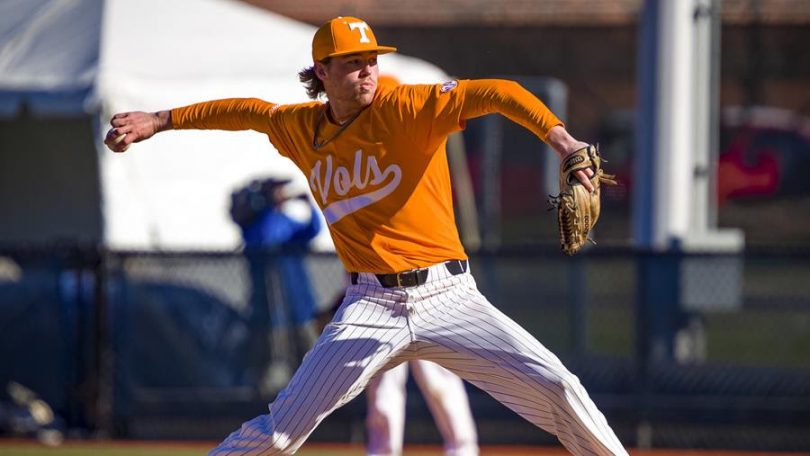 TUSCALOOSA, Ala. – No. 6 Tennessee pulled out a big win in extras on Saturday night, coming away with an 8-4 victory at Sewell-Thomas Stadium to even its series with Alabama.

The Volunteers scored four runs in the top of the 11th and Camden Sewell retired the side in order in the bottom of the inning to give UT its sixth extra-innings victory this season. Evan Russell drove in the game-winning run with an RBI walk.

Sewell was incredible in relief, tossing 3.2 scoreless innings to earn his first win of the year. The junior right hander gave up just one hit and struck out three batters on the night.

Senior lefty Will Heflin gave Tennessee a great start on the mound, allowing just one run and striking out five in 5.2 innings of work, keeping the Big Orange in striking distance.

The Vols had chances to take the lead early in the game after loading the bases with two outs in the third and fourth innings but were unable to cash in as Alabama starter Dylan Smith got a pair of strikeouts to escape both jams and keep the game scoreless.

The Tide opened the scoring with a solo home run by William Hamiter to lead off the bottom of the fourth. It was the first homer of the year for the sophomore designated hitter.

UT (23-5 // 6-2 SEC) was able to break through and take the lead with a four-run seventh inning. Logan Steenstra sparked the rally with a leadoff triple to straightaway center field before scoring on a failed pickoff attempt by Crimson Tide pitcher Jacob McNairy to tie the game at one. Jordan Beck gave the Vols a 2-1 lead with a sacrifice fly and Connor Pavolony plated two more runs with a two-out RBI single to make it 4-1.

Pavolony played a big part in the Vols’ success, going 2-for-3 with a run scored, two RBI and three walks on the night. Jake Rucker also had a pair of hits to extend his hit streak to 13 games while Drew Gilbert had a hit, walked twice and scored two runs.

Alabama (16-10 // 2-6 SEC) took advantage of a pair of errors in the seventh to get a run back and cut UT’s lead to two before plating two more runs in the eighth to tie the game at four. Andrew Pinckney drove in the tying run with an infield single with two outs.

Sewell went on to pitch three straight shutout innings to stifle the Tide’s momentum while Tennessee’s offense displayed some clutch situational baseball in the 11th to put the game away. Aside from Russell’s RBI walk, Steenstra drove in a run with a sacrifice fly and Pete Derkay laid down a perfect squeeze bunt with two outs to drive in a run, as well.

The Vols will look to take the series with a win in Sunday’s rubber game, which is slated to start at noon ET and will be aired on the SEC Network.

EXTRA INNINGS MAGIC CONTINUES: Tennessee improved its record to 6-0 when going to extra innings this season with Saturday’s win. The Vols have won their past seven games that have gone to extras dating back to 2019.

HEFLIN & SEWELL SOLID ON THE MOUND: A big reason UT was able to pull out the win on Saturday had to do with the pitching of Will Heflin and Camden Sewell. The duo combined to pitch 9.1 innings, allowing just one run why accounting for all eight of the team’s strikeouts. Sewell earned his first win of the year after throwing 3.2 scoreless innings to finish the game.