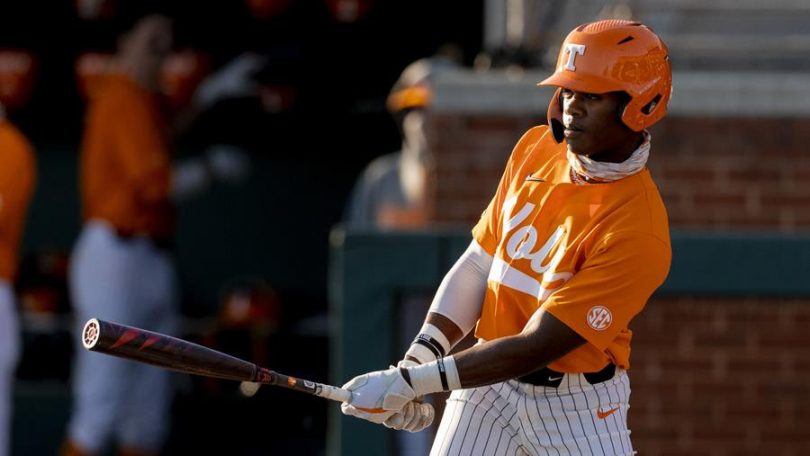 KNOXVILLE, Tenn. – No. 6 Tennessee took care of business with a solid all-around effort in a 9-2 victory over Western Carolina on Tuesday night at Lindsey Nelson Stadium.

A pair of freshmen were the stars for the Big Orange as outfielder Kyle Booker and pitcher Jake Fitzgibbons both put forth their best performances of the season to this point.

Booker led the charge offensively with a career-best three runs and two hits, including his first-career home run, and a career-high tying three runs batted in. Fitzgibbons earned his first collegiate victory after pitching 3.1 shutout innings in relief, allowing just one hit while striking out four batters.

Jake Rucker also had a solid night with four RBI and his fourth home run of the year, a three-run shot in the eighth inning to put the final nail in the Catamounts’ coffin.

Seven different pitchers saw action for the Vols on Tuesday night and combined to allow a season-low three hits while totaling 11 strikeouts.

UT jumped out to an early lead on an RBI groundout by Rucker in the first inning, but fell behind 2-1 in the third after a two-run homer by Luke Robinson.

Booker’s solo home run quickly tied the game in the bottom of the third before a three-run fourth inning gave Tennessee a lead they wouldn’t relinquish. Booker drove in two runs with a single down the right-field line and ended up scoring on a wild pitch later in the inning to give the Vols a 5-2 advantage.

A pair of home runs from Evan Russell and Rucker accounted for the final four runs for UT. Russell’s solo blast in the fifth was his fourth home run in the last three games.

Eric Wallington got the loss for WCU (13-5) after allowing three runs in just a third of an inning. Daylan Nanny and Will Prater had the only other hits for the Catamounts aside from Robinson’s homer.

Tennessee (22-4 // 5-1 SEC) will now set its sights on a trip to Tuscaloosa this weekend to take on Alabama. First pitch for Friday’s series opener is slated for 7 p.m. ET on SEC Network+.

BIG SWINGS FOR BOOKER: True freshman Kyle Booker had his best game of the season on Tuesday, leading the team with two hits and three runs scored, both career highs. The Mississippi native also hit his first-career home run and tied a career high with three RBI on the night. Booker’s solo homer in the third inning tied the game and his two-run single in the fourth put the Vols up for good.

RUSSELL CONTINUES TO MASH: Senior outfielder Evan Russell’s impressive power surge continued on Tuesday with his fourth home run in the past three games. Russell tied the school record with three home runs in a 9-8 win over LSU last weekend and hit his fifth home run of the year on Tuesday against the Catamounts.