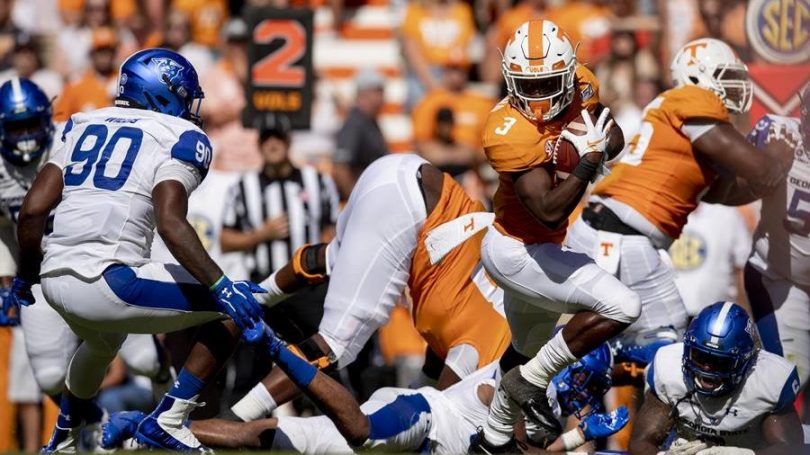 KNOXVILLE, Tenn. – Despite 108 receiving yards and a touchdown on a career-high seven catches by senior Jauan Jennings, a pair of fourth-quarter turnovers cost Tennessee, as the Vols fell to Georgia State, 38-23, in their season-opener at Neyland Stadium Saturday.

The Vols now prepare to host BYU next Saturday at 7 p.m. ET (ESPN).

After UT took a 23-21 lead on a 31-yard field goal from Brett Cimaglia with 12:05 to go in the game, GSU tallied 17 unanswered points over a 10-minute stretch in the fourth quarter to secure the win.

UT outgained GSU in both total yards (404-352) and passing yards (311-139), however two trips to the red zone that ended in field goals instead of touchdowns proved to be pivotal to the final outcome.

Senior tight end Dominick Wood-Anderson finished with a career-high 79 receiving yards on three receptions, highlighted by a 54-yard pitch-and-catch from Guarantano early in the fourth quarter to put the Vols in position to score.

Freshman linebacker Henry To’o To’o began his career on Rocky Top with an impressive seven total tackles, which tied for the team lead. He had four solo tackles and 0.5 tackles for loss.

The Big Orange responded with a 16-play, 78-yard drive, capped off with a six-yard, back-shoulder fade from Guarantano to wide receiver Marquez Callaway. The drive ate 7:42 off the clock and knotted the score at 7-7. The 16-play drive was the longest drive for the Vols since their first scoring drive in last season’s opener against West Virginia.

UT took control late in the first quarter when Chandler scampered for 31 yards through the Panther defense and into the end zone to give Tennessee a 14-7 advantage.

Georgia State tied things back up at 14-14 with a 16-play drive of its own late in the second quarter.

As time in the first half expired, the first of Cimaglia’s three field goals gave UT a 17-14 lead as both teams headed to the locker rooms.

Georgia State came out of the break with a well-orchestrated, nine-play, 75-yard drive to retake the lead at 21-17.

Two field goals from Cimaglia that bridged the third and fourth quarters gave UT a slim 23-21 lead before GSU pieced together three consecutive scoring drives, two of which came off Vols turnovers, to take a 38-23 lead in the game’s waning minutes.

Jennings hauled in an 18-yard scoring strike from Guarantano with 53 seconds remaining, and Cimaglia’s PAT provided the final score.