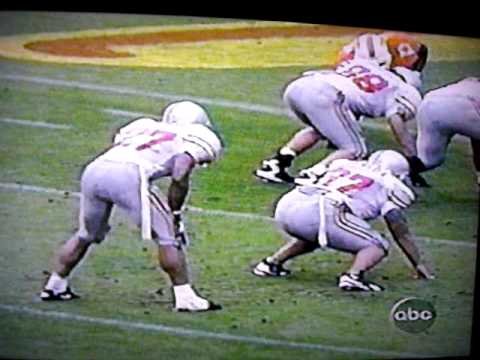 We’re counting down the kickoff until the Vols’ football season with a look back at Tennessee players who’ve worn the numbers.

In Tennessee football lore, the number 50 brings back only one memory for me: Bill Duff‘s crucial goal-line stop on fourth down against Heisman Trophy winner Eddie George in the 1996 Citrus Bowl game against Ohio State.

The late great John Word called it something like this: “I don’t know sir! I do not know! Tennessee pounds him at the line! It was Bill Duff at the bottom of the heap — He. Did. Not. Make. It!”

“For me I was still a backup,” Duff told Austin Price of Volquest.com in 2014. “We rotated the line pretty heavy. Coach Chavis was really big on keeping the rotation fresh. I lined up against Orlando Pace and another guy. I squirted through the hole and hit Eddie in the knees. If I hadn’t hit him, then we had two or three guys ready to do so.”

“There is no doubt that he was my type of player,” Chavis said about Duff. “Tough as nails and it never got too tough for him. He loved to compete and he played football like there was no place to hide.”

In 1999, he appeared in five games for the Cleveland Browns.

Interesting tidbit: In 2007, it was announced that Duff would co-host a new History Channel series to trace the history of hand-to-hand combat. In this article, it was noted that Duff ‘holds a brown belt in Korean street fighting’ and is ‘undefeated in bar fights.’

Pro Football player, bodyguard, wrestler and stunt double, Bill Duff holds a brown belt in Korean street fighting (Toa So Dou) under Master Davis of the Wa Wrang Studios in Riverside, New Jersey. He is a two-time heavyweight state champion wrestler, member of the New Jersey Hall of fame, and undefeated in bar fights. Bill, 6-foot 4 inches tall and 280 pounds, was a professional football player for seven years. He started for the Orlando Rage in the XFL and spent the 2000 and 2002 NFL Europe seasons with the Berlin Thunder, helping them win the 2002 World Bowl Championships. Continuing his career with the Arena Football league, he played for the Indianapolis Firebirds and Columbus Destroyers. Prior to this, he played for the Cleveland Browns in their expansion year 1999-2000. He was also co-captain of the 1997 SEC champion Tennessee Volunteers.

What would 50 shades of Orange look like, #VFL pic.twitter.com/i8lRegwHK5