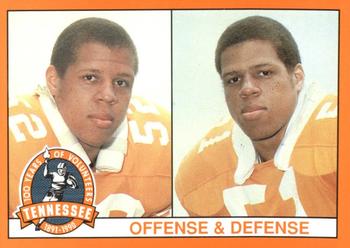 We’re counting down the kickoff until the Vols’ football season with a look back at Tennessee players who’ve worn the numbers. Born in Knoxville and a product of Austin East High School, Reggie McKenzie was a linebacker at the University of Tennessee from 1981-1984. According to utsports.com, he finished his Tennessee career with 174 tackles (including 89 during his senior campaign) and 4.0 sacks.

McKenzie was selected in the 10th round of the 1985 NFL Draft by the Los Angeles Raiders, where he started 32 games during his first two seasons. He also played for the Cardinals and 49’ers before retiring from football in 1992.

After the NFL, McKenzie returned to Tennessee as an assistant coach under head coach Phillip Fulmer in 1993.

…the Vols went 10-2 and ended the season in the Florida Citrus Bowl. That year, UT landed one of the nation’s top recruiting classes with a group that featured quarterback Peyton Manning.  — utsports.com

McKenzie joined the Green Bay organization as a pro personnel assistant in 1994. In 2008, he was named Director of Football Operations for the Packers.

In 2012, after 18 years with the Packers’ organization, McKenzie was named General Manager for the Oakland Raiders, a position he still holds today.

McKenzie was voted Sporting News Executive of the Year in 2016 and last month he was inducted into the Tennessee Sports Hall of Fame, along with his brother Raleigh.

Interesting tidbit:  In 2009, McKenzie had his 1996 Packers’ Super Bowl ring stolen from his car.