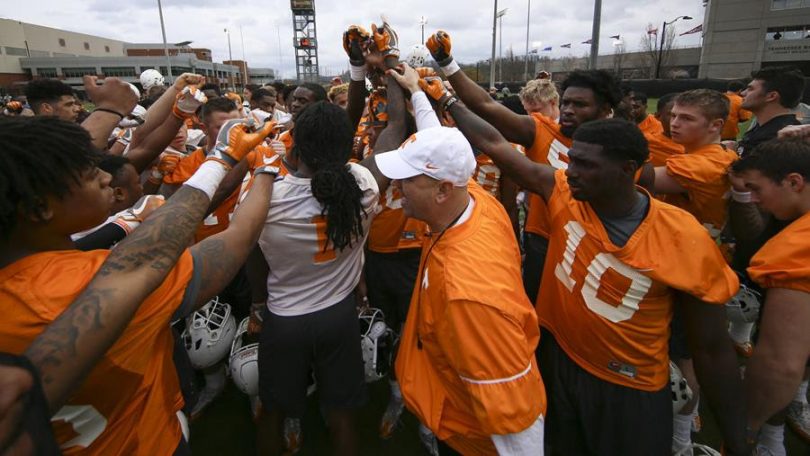 KNOXVILLE, Tenn. – The Tennessee Volunteers held their first football practice of the Jeremy Pruitt era on Tuesday at Haslam Field, marking the beginning of the spring season.

The Vols will practice 15 times over five weeks, culminating with the annual DISH Orange and White Game on April 21 at 2 p.m. inside Neyland Stadium.

Pruitt, a five-time national champion as an assistant, was named the 26th coach of the Vols on Dec. 7 and has led the Orange and White program for over three months.

Tuesday was the first time he actually got to coach a practice in his new role, however.

“I came here to coach, so that was the easy part for me,” Pruitt said.

The first-year head coach got his first glimpse of the Tennessee team in person, too.

“I think our guys did a nice job today, we’ll watch film and see what the first day looks like,” Pruitt said. “But I know this — and I told the kids this — you get 15 practices, today was our first day and we’re never going to get it back. I hope that everyone out on the field today took advantage of their opportunities.”

Becoming a team, competition and handling adversity will be some of the main points of emphasis for the team during spring practice.

Several Positions Switches for First Seven Days
Pruitt said that several Vols will get a look at new positions for the first seven practices and then will be reevaluated, including Carlin Fils-Aime (running back to cornerback), Princeton Fant (tight end to running back), Ja’Quain Blakely (defensive line to tight end) and Tyler Byrd (wide receiver to defensive back).

Pace Picks Up
Pruitt will emphasize pace and reps during spring practice. Nobody will be standing around and everybody will receive opportunities. It’s the same practice plan he has used at his previous coaching stops.

Opening Statement:
“It was exciting to get out there on the grass. It’s new for everybody. It’s new for the coaches, it’s new for me, new for the training staff, new for the strength staff. I thought overall everyone in the organization tried to do what we asked them to do. It’s going to be a learning process in how we practice. Our guys will get used to taking the number of reps they will, I think it will help them as players. It was interesting, as practice went, I saw some guys that improved their technique just as practice went today. I’ll be excited to jump up here and watch some tape. We’ve set a few spring goals for our team. The first thing we talked about is that we want to become a team. We think that’s important for us. We want to learn how to practice. We want to see how much knowledge we retain at each individual position and we want to see who the competitors are. We want to see who handles adversity. I think our guys did a nice job today. We’ll watch film and see what the first day looks like. But I know this — and I told the kids this — you get 15 practices, today was our first day and we’re never going to get it back. So, I hope that everyone out on the field today took advantage of their opportunities.”

On any injuries to the team:
“Some of these guys — I don’t know the medical terms — have knee injuries, some hip injuries. Right now, Quay Picou is not on the team. He has left the team, so he won’t be with us this spring.”

On evaluating the players in the program since he arrived at Tennessee:
“I did look at everybody in the organization and to me evaluations like that are tough because you don’t know exactly if they played in a game. I didn’t know the previous scheme and what they were supposed to do, so one thing I tried to do is see what kind of competitors they were. The other thing was just like how you would evaluate a high school kid, what kind of athletic ability and do they have balance, body control? Can they change direction? Do they know how to strike? So yes, we did. We did with everyone in the organization and we actually looked at a lot of practice tape too just to kind of get an idea.”

On what position group he spent his first practice as a head coach with:
“I’d say the thing that I’ve got to do is wherever I can contribute the most to our organization. When football starts, I’m a defensive coach so I’m going to spend most of my time on the defensive side. When we watch tape, we’ll watch it as a staff and I’ll sit there. I can see what the offense is doing and if I have questions, I’ll ask. I have a good understanding of what they’re trying to get done. I sit in their meetings every day.

“The guys that we have on the defensive, I’m probably a little more familiar with, more comfortable with because we’ve all worked together: Kevin Sherrer, Tracy Rocker, Chris Rumph and Charles Kelly. We’ve all worked together for several years, Charles only one year, but the system that he came from was very similar to ours so those guys come prepare things and I go in there and I spend a little bit of time with them. I spend a lot of time with the offense in preparation but on the field, I’m going to coach on the defensive side of the ball.”

On what he learned in his first practice as a DI head coach:
“I’d say the first thing is from the organizational standpoint, we had a coaches’ walk-through. We had to get the coaches ready. We’re going to coach everybody. We had a walk-through and we decided to change what parts of the field we were doing some of it and then we went back over it. In case it rained, we went over the inside part and I think before we went out on the field everybody was thinking it was going to rain so everyone was locked into the inside part. I should have one more time went over it with the coaches so we would have all been on the same page. We had one hiccup.”

On the time it will take the team to adjust to this coaching staff’s style:
“The big thing is for the contact. When I say learn how to practice, I’m talking about — football is a collision game — you have to know how to use your face and hands and strike and that’s all three levels on defense. It happens with the offensive line, the tight ends, running backs, wide receivers and everybody that plays special teams, learning how to strike, learning and playing with the proper body angles so you have balance and body control where you can stay on your feet. We want to be able to practice. We want to be able to thud runners and be thudded. To do that, you’ve got to practice and stay on your feet. Also, part of it is you have to be able to sustain and you’ve got to be able to do it over and over and we’re trying to put them in adverse situations to see how they respond. That’s kind of what I’m talking about.”

On evaluation of players who could possibly play different positions:
“I would say the big thing is they’re all willing. They’re all willing to train, they’re willing to try a new position, which is important. I’ve seen over the years, you possibly move a guy to a different position, he agrees to it, and then he’s not really all in. These guys are trying to understand and comprehend what we’re trying to get done, and they’re giving effort to give it a chance.”

On philosophy on pace of practice:
“One thing that we want to do is we don’t want guys standing around. When we’re going to do group periods, we’re going to have three to four different types of drills going so nobody’s standing around. You might have the one’s on one end doing something, the two’s, the three’s, and then you might have the O-line and D-line doing different drills so you’re kind of rotating. They take four plays and rotate, so there’s constant movement. When we do team periods, seven-on-seven, we always two-spot. So, whether we’re working with the one’s and two’s, or three’s and four’s, or the one’s and the three’s and two’s and four’s, everybody takes the same amount of reps, so you’re going to get developed as a player. I think all the places that I’ve coached in the 11 years that I’ve been in college football have used the same practice plan, and it works. I think it helps in player development because there’s one thing about it, if you stand and watch, you’re not going to get any better. So, everybody is getting the same amount of reps. Whether you’re a freshman, whether a guy’s been an All-SEC player or a guy’s a walk-on, everybody gets the same amount of reps and we’re going to coach them all the same way.”

On the challenge presented with only eight healthy offensive linemen:
“All I know is that we went four groups today. We repped those groups and got it done out there. I don’t know how many we have that are healthy, but we have some guys out there who got reps and got it done. But yes, we need more numbers. We have talked about that, and we are behind. We need offensive linemen. We have guys that will be back in the fall who are out now, so that will help.”

On building relationships with players during the spring practice:
“To me, getting to know them is about getting to know what kind of player they are. You can learn somebody’s personality from their competitive spirit on the practice field. There is plenty of time to build relationships and all of that, but at the end of the day, this is a performance-based industry, so you must perform on the field. Over time, the relationships will take care of itself.”

On Princeton Fant practicing at running back:
“Long-term position, I don’t know. When he got here, he went to the tight end room to start with. When we got here, we sent him to another room. We are going to give him a shot at running back and see where it goes. He is going to do that for about seven days. We have several guys who are working at seven days for different positions, and then we are going to reevaluate them and see if they need to go back.”

On getting back out on the practice field:
“I came here to coach, so that was the easy part for me. From a player standpoint, one thing that we are going to do is confront them and be demanding if players don’t do things the way we expect. I think as practice went, the players responded more to that. There were some good things in that regard, and there were some bad things. It will be like that 10 years from now on Day One, though.”

On being limited during the spring due to injuries and lack of depth:
“I think numbers-wise, we probably have as many guys out there as anybody with the exceptions of a couple of positions. We are short on healthy people. We have them, and they will be back, but it does make things a little tougher. This happens everywhere, so we have to find a way to figure it out and get it done.”