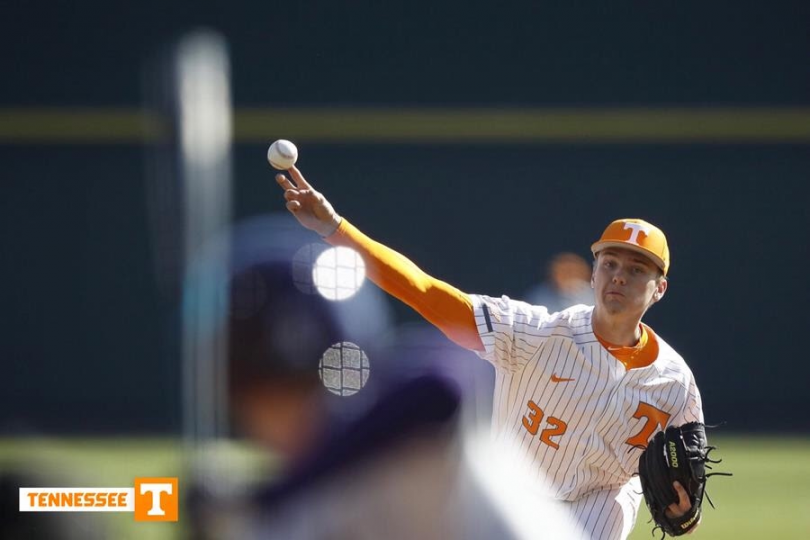 KNOXVILLE, Tenn. –  After a disappointing finish to last week, Tennessee came out on fire in Tuesday’s 10-1 win over James Madison at Lindsey Nelson Stadium, scoring seven runs in the first inning.

UT batted around with seven of the team’s nine starters recording a hit in the inning while Jay Charleston, Zach Daniels, Brandon Chinea and Pete Derkay all drove in runs for the Vols. JMU starter Christian Bourne recorded just one out before being chased from the game.

The seven runs were the most by UT in an inning this season and the most since also scoring seven in the seventh inning of an 18-4 win over Austin Peay on March 15, 2017.

Freshman Sean Hunley started for the third time this season and had one of the best outings by a UT pitcher this season, tossing seven scoreless innings while striking out six in route to his second victory of the year.

All nine of Tennessee’s starters recorded a hit in the game and six different players drove in runs for the Vols. Senior catcher Benito Santiago led the Vols with a 3-for-3 performance at the plate and two runs scored.

UT’s 14 hits were the second most in a game this season. The Big Orange were especially good with runners in scoring position, an area they have struggled with in recent games, going 6-for-13 on the day.

After the big first inning, the Vols did not score again until the bottom of the seventh when freshman Brandon Trammell blasted his first-career home run, a pinch hit, two-run shot to right field to extend the lead to 9-0.

The Vols added one more run in the eighth on an RBI groundout from Alex Sosnowski before the Dukes broke up UT’s shutout bid by scoring on a bases-loaded walk in the ninth.

Seven of Tennessee’s nine starters recorded a hit in the inning – four of them driving in runs – as 11 batters came to the plate.

Brandon Trammell hit the Vols’ second pinch-hit home run of the year with a two-run blast to right field in the seventh inning. Both of UT’s pinch-hit homers this season have come from freshmen (Evan Russell vs. ETSU) and both were their first-career four baggers.

The Vols wrap up their 14-game homestand tomorrow as they host James Madison for the second time. First pitch is set for 3:30 p.m. and the game will be streamed live on SEC Network + (WatchESPN) with an audio only stream on UTSports.com.