Click to expand...
The OP deserves some retro likes ... As of right now, mine is the only one. I don't remember this thread from September 1, but I'm glad I didn't post to it because I would have made fun of him too. This was the best prediction I've seen on here in a long time.
Likes: tennvols77, SAPPER 5, VolAllen and 8 others

WOV is a national treasure - second only to the one and only Mike Leach.
Likes: WiseOlVol and joevol33

I love this team they always leave it all on the field and never stop fighting!
Likes: WiseOlVol

All I can do is laugh at this point.

Vol737 said:
Pffffffffttt! We don’t win more than two games this year. And we’ll be lucky to do that. Y’all stop posting these insane, homer threads, please! What you saw is what we are.
Click to expand...
What are we now?
Likes: VolFanatic27, butchna, VFL-82-JP and 2 others
V

And only 1 game behind Bama for conference record
Likes: VolnJC, ERvolsfan, vols40 and 2 others
V

Click to expand...
Nice call wise. How is the weather in Vegas? Will be there next week
Likes: PulaskiVolFan

You want, I'm here..bring it

Tennessee got ran over by Georgia State to the tune of over 200 yards. Yet somehow you think Tennessee is going to beat SC, KY, Vandy, Missouri, and Miss ST?
Click to expand...
JoAllan said:
Call me dumb but I seriously believe Tennessee will beat BYU. However that still doesn’t make me feel better. After that game I know where Tennessee is and it’s not good. Tennessee will struggle vs SC, Vandy ect........and will not compete vs Miss ST Missouri. It will be very difficult for Tennessee to win 4 or more games.
Click to expand...
That's the kind of predictions I usually make. The exact opposite on every friggin one. Good call lol!
Likes: VFL-82-JP, WiseOlVol, PulaskiVolFan and 1 other person

Vol737 said:
Pffffffffttt! We don’t win more than two games this year. And we’ll be lucky to do that. Y’all stop posting these insane, homer threads, please! What you saw is what we are.
Click to expand...
These are the kind I like.
Likes: VolFanatic27, StarRaider, butchna and 6 others

Volswin98 said:
And only 1 game behind Bama for conference record
Click to expand...
Surely you didnt compare the SEC East to the SEC West?? If Bama played in the East they go undefeated! Still happy they lost

CR-vol said:
That's the kind of predictions I usually make. The exact opposite on every friggin one. Good call lol!
Click to expand...
“It's hard to get all worked up over it anymore. This is 3 years running of absolute suck way worse than anything before it. I thought there's no way it could get worse than last season and that had to be rock bottom. So here we are now, new season, the wheels are off and I don't even think we have seen rock bottom yet. We can't even have the relative optimism of losing a close one to our SEC rivals never mind losing to non-conf teams we should always beat. I still believe at some point the luck part will roll our way because it hasn't for so long. But I guess I'll have to see it to believe it. We're hopelessly outclassed in every way. UAB is the only team left we should beat but that's not a given. Vandy and Mizzou are to the point they can chalk us up to a WIN because until proven otherwise that's what Tennessee is on their schedule. None of those teams will overlook us. They're all enjoying it and who could blame them”

Not too sure who said this (read above).

Yep I’ve probably said “I was wrong” more than anyone here.......(how many times have you?.....also why bring it up, when you have said the same?). Most thought the first two games were really bad......because they were.

I have also stated it wasn’t as bad as I was making it out to be.....and I (along with others) would have a better understanding of where Tennessee is after the SC game.

I was pizzed, at terrible player performance and effort, I was pizzed at BAD coaching decisions, I was sick and tired of under achievement.

I’m proud of how Tennessee turned their season around. The coach has things going in the right direction.......however this team is FAR from overachieving. The best teams Tennessee has beaten are some 6-6 SEC teams, and still should have won the first two games.

Hopefully Tennessee will have an even better season next year........hopefully coming off a bowl win.

I've said it many times and your quotes are still funnier than mine.
Likes: WiseOlVol

Click to expand...
That was a 40 megaton boom of a statement with a 3 mile long fuse. /hat off
Likes: tennvols77, Neyland Law Vol and WiseOlVol 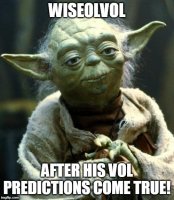 PulaskiVolFan said:
What are we now?
Click to expand...
Better than what we were then, thankfully. I’ll own it. Proud these guys got up off the mat. I don’t mind being wrong sometimes.
Likes: SAPPER 5 and WiseOlVol
W

vols40 said:
Nice call wise. How is the weather in Vegas? Will be there next week
Click to expand...
Been chilly. Warming up to 50s. Looks dry. Enjoy!
V

WiseOlVol said:
Been chilly. Warming up to 50s. Looks dry. Enjoy!
Click to expand...
Thanks

ibvolman said:
You serious Clark? With what I saw in the effort against GSU, the only two dates on the schedule where we stand a chance is Nov 2, and Nov 16. Honestly, both of those dates should be considered a toss up at this point, and one of them is a by-week.
Click to expand...
Was funny stuff...😏 Credit due, OP! I never even clicked on this thread...much less jumped on that limb!

I can admit I thought you were crazy. We just lost a terrible game and I read this post thinking how bat chit crazy you was. I was wrong they managed to do it. I can man up an admit
New posts
You must log in or register to reply here.
<< Tennessee Vols Football Forum
Share: Facebook Twitter Email Link