Tiyon Evans and Jalin Hyatt were not in pads again. Malachi Wideman was in pads but limited, per Ubben.

Not full pads: Jalin Hyatt, Tiyon Evans, Malachi Wideman all limited.
Click to expand...
Brian Maurer flashed the most but was also inconsistent. Throws two great balls then will miss on the third but showcased a quick release.

Hooker was solid with a big arm and was better on deep balls today. Bailey would be third today. Slower release of the three. Wasn’t horrible but didn’t stick out. Of course I’d couch all of this by saying that it’s two periods that we get to see out of 20.
Click to expand...
OL- zone, steps, G&C combos
Left side: Dayne Davis (T), Jerome Carvin (G), Calbert (T), Harris (G)

Cooper Mays (C), Parker Ball (C)
Click to expand...
Defense Line: under the schute, staying low. Rodney Garner was pushing his group with a lot of agility stuff. I thought they looked as nimble as I’ve seen the defense of line look here in a long time.

Tim Banks was working with the safeties on fumble recoveries.
Click to expand...
a.price

In terms of who's lining up where, K'Rojhn Calbert and Dayne Davis, a former walk-on the previous staff had put on scholarship in December, were two of the guys taking reps at left tackle. Davis is every bit of 6-foot-7 (he's listed at 325 pounds) and is in his third year in the program having joined the Vols in 2019 out of Sullivan East High School in Bluff City. The players taking reps at right tackle included Cade Mays and Darnell Wright, plus redshirt freshman RJ Perry and freshman William Parker.

At the guard spots, Jerome Carvin, Kingston Harris and Ollie Lane were on the left side and Javontez Spraggins, Chris Akporoghene and Jackson Lampley on the right side. Cooper Mays and walk-on Parker Ball took reps at center during this particularly period. The Vols surely are repping more guys at center because you can never have enough.
Click to expand...
Routes-on-air featured some downfield throws on Thursday and even though the go routes weren't run at full speed, you can see the burst both Velus Jones Jr. and Jimmy Calloway have. Jacob Warren also moves well for his size and looks more comfortable than the other tight ends running routes. The receivers on the near side of this drill typically were having to come back to catch the passes as the quarterbacks didn't have enough air on it, though Harrison Bailey hit Calloway in stride on one throw and Brian Maurer had a nice throw to Andison Coby.
Click to expand...
Defensive line coach Rodney Garner and outside linebackers coach Mike Ekeler oversaw a joint drill with their groups with Tyler Baron, Bryson Eason and Byron Young all working with the defensive line. Lot of technique work for this group as they worked on hands, footwork and striking. Kurott Garland and Omari Thomas had some good reps, while one drill with the defensive linemen maneuvering around upside down trash cans drew Garner's hire. He got onto Matthew Butler after his time through it and especially didn't like how Young, the junior college transfer who looks the part, went through it too high
Click to expand...
Notables players not present during the open-viewing period of practice include linebackers Jeremy Banks and Roman Harrison and freshman quarterback Kaidon Salter, one of four players currently suspended indefinitely.
Click to expand...
p.brown 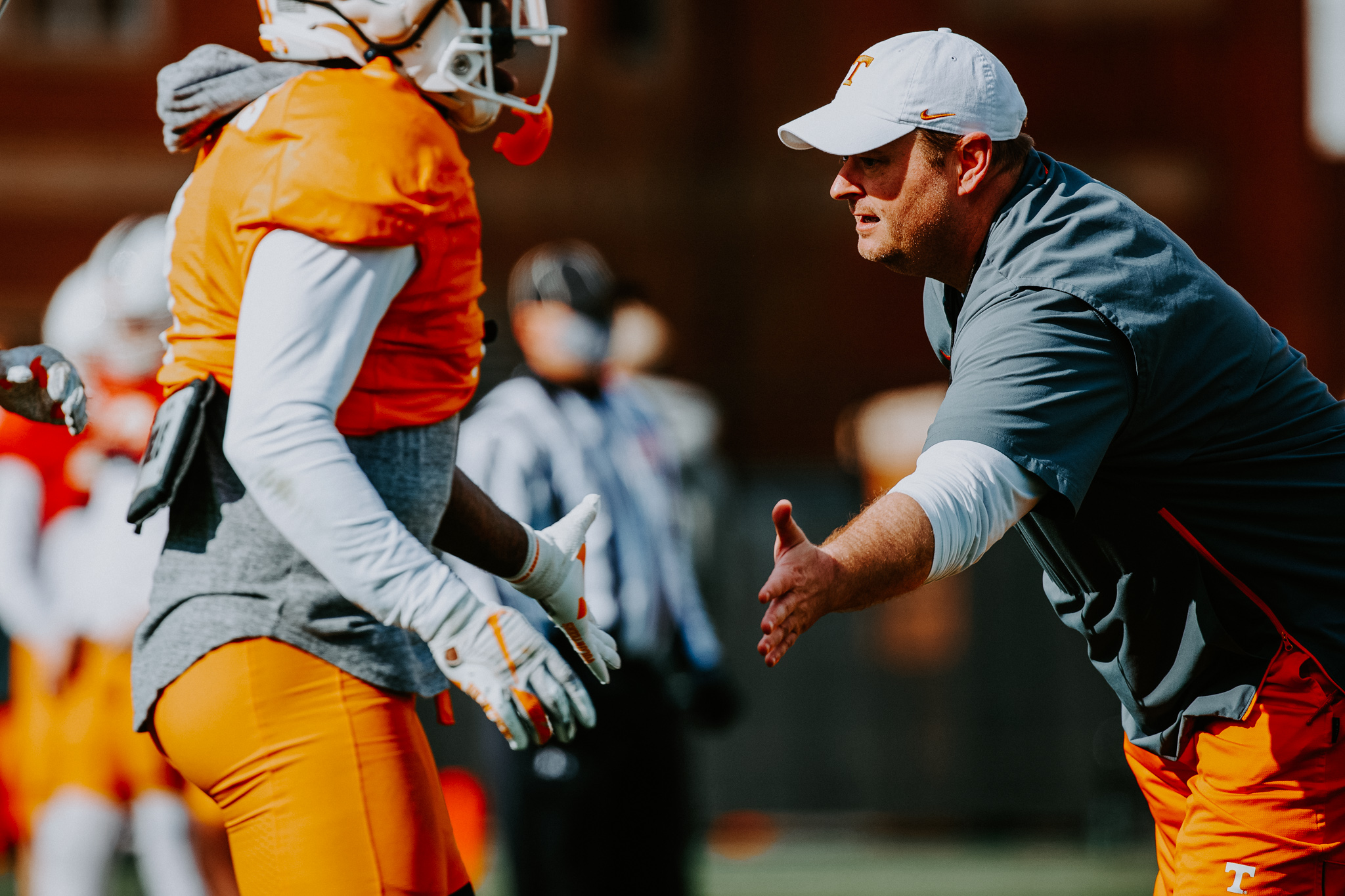 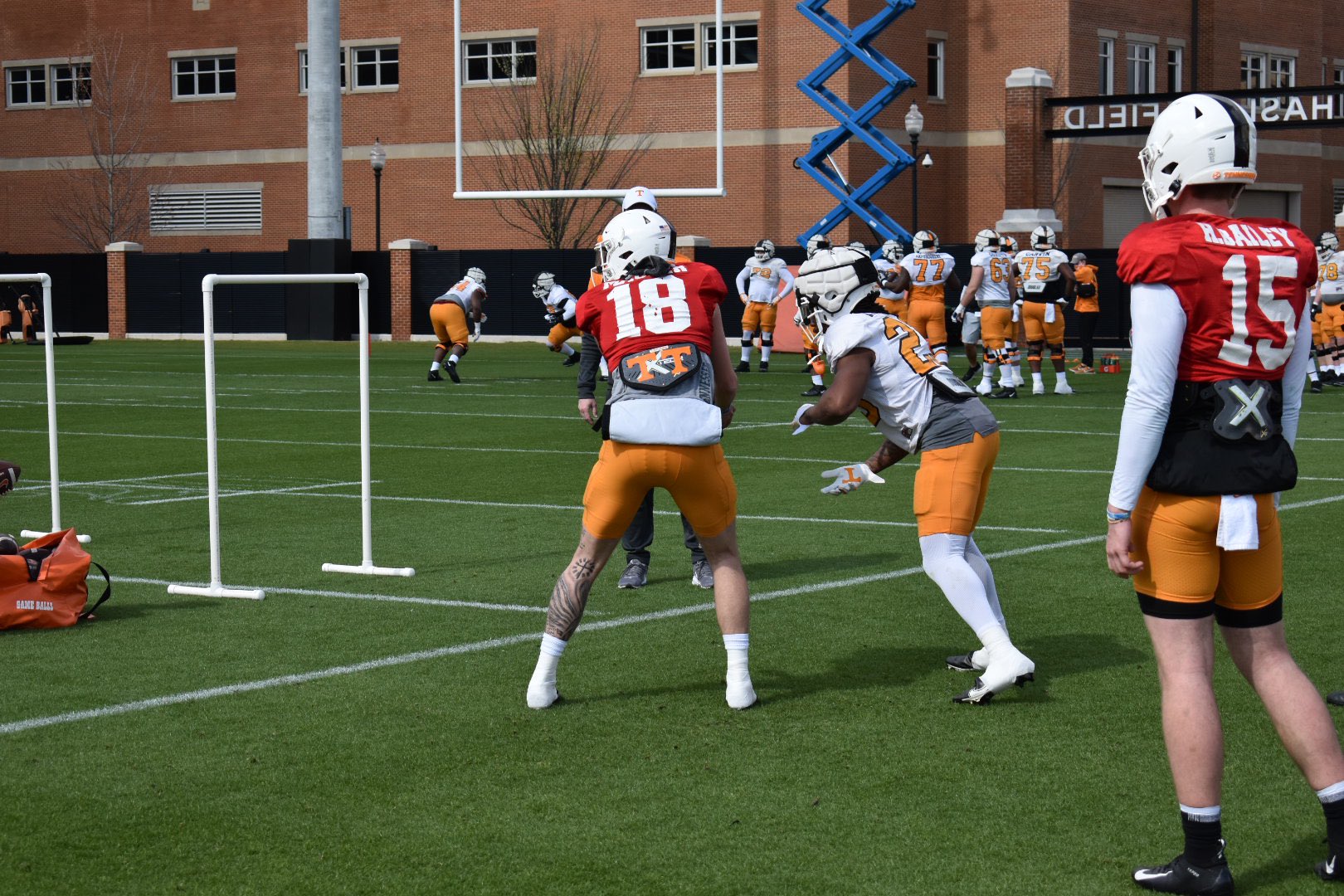 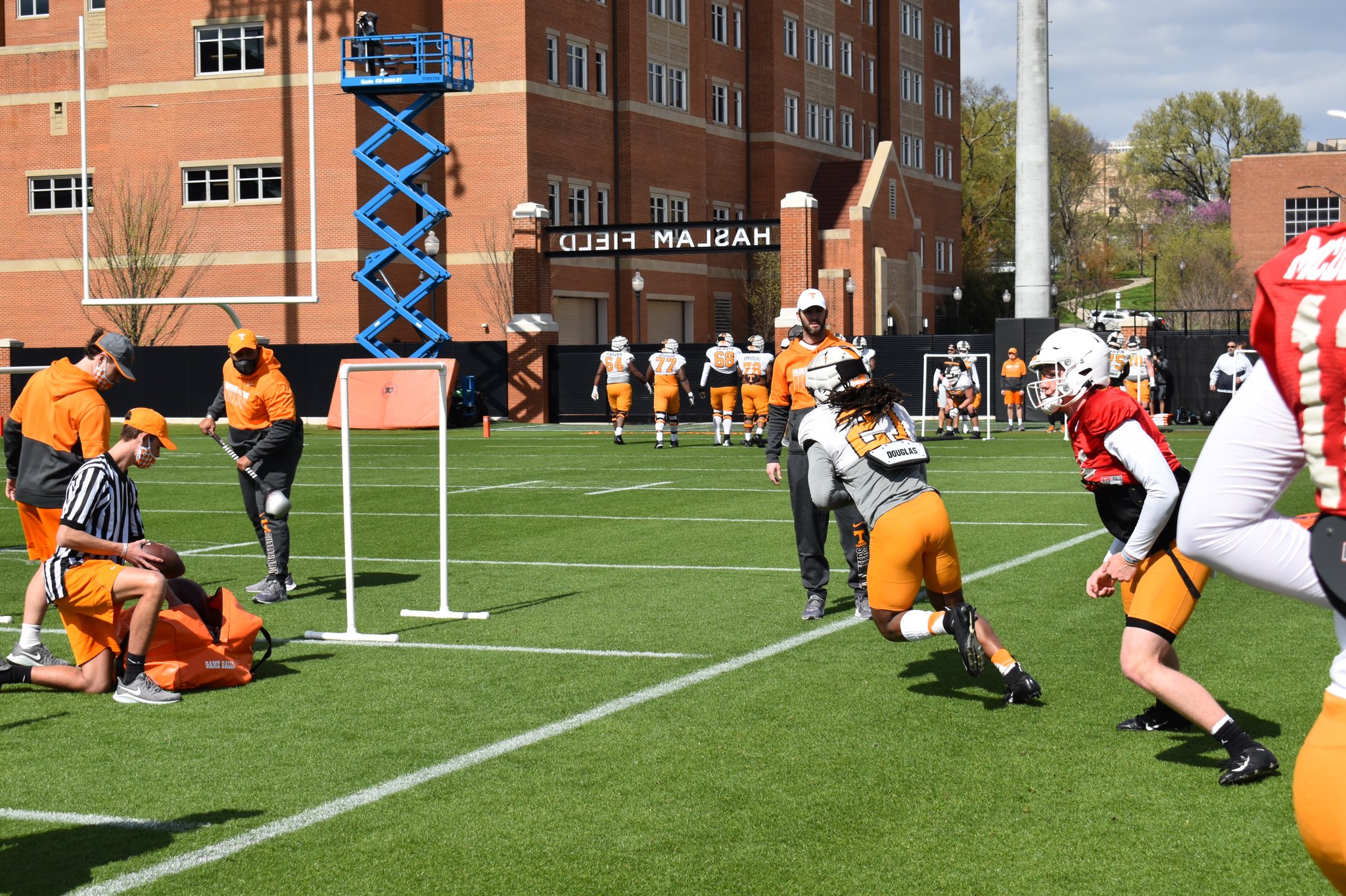 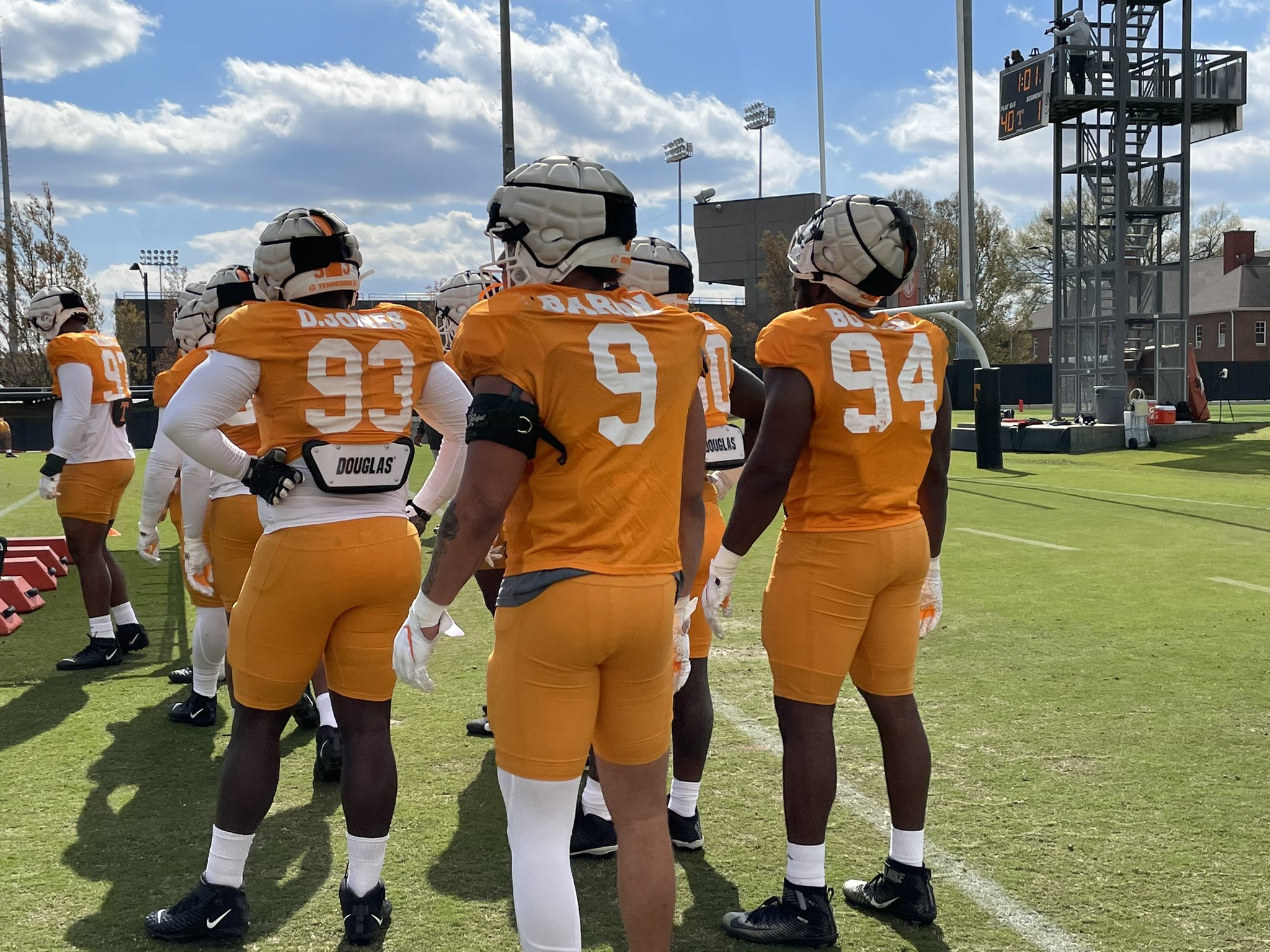 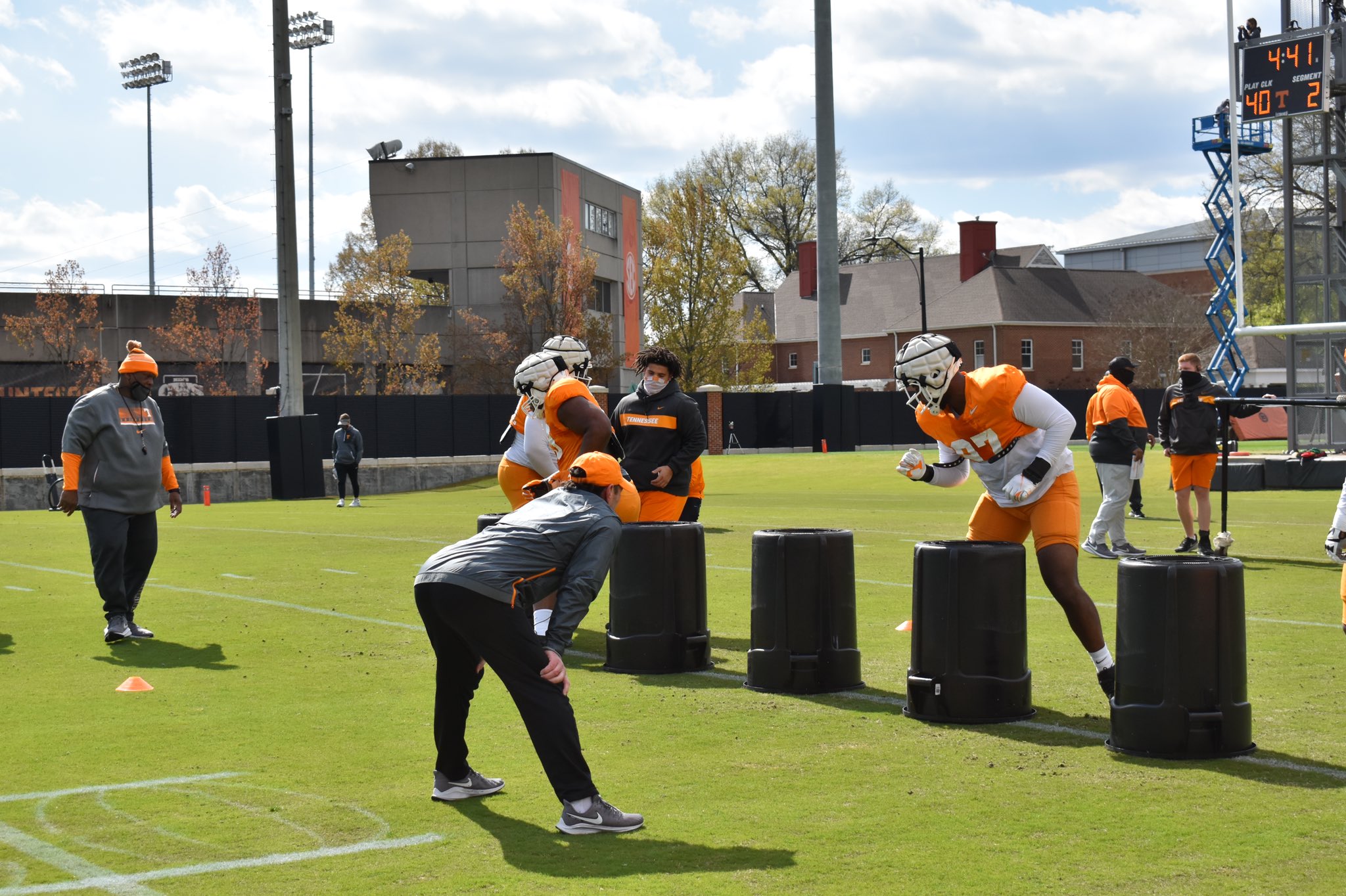 Good thing we want know anything on the QB position until near the start of the season still time for Bailey to get it.
Likes: orangebloodgmc

Not trashing a guy that worked hard to earn a scholy but a former walkon with no game experience at LT concerns me
Likes: marcusluvsvols, headhunter15, GoodmanVol and 6 others

I also watched the VQ video of them breaking down the practice. I'm really excited about Baron. I thought he was better suited for a 4-3 defensive end, and that's seemingly where we are headed. I think he's a perfect fit, and turning into a leader apparently. Another guy that I'm excited for is Jacob Warren, I think he could be a real pass catching threat in this offense. Glad to hear the D Line is apparently doing pretty well and looking more athletic. Hopefully that helps in getting to the QB. Dee Beckwith still stands out at RB, he's just so big and so fast he's going to find a role on this team. I'm also not surprised to see Maurer earning first team reps, as I think he is almost tailor made for this offense. He is very similar to both of Heupel's last two QBs at UCF. Still think Hooker and Bailey will push for playing time though.
Likes: headhunter15, MemphisVol77 and Volle
R

VolnJC said:
Not trashing a guy that worked hard to earn a scholy but a former walkon with no game experience at LT concerns me
Click to expand...
Yes it is a concern, but that's the state of our program right now. It's not different then when Jacob Gilliam had to start at LT in 2014. A lot of time between now and the beginning of the season and we do have options like Calbert and possibly Mays or Wright. If Davis proves to be the best, then so be it.
Likes: marcusluvsvols, Orange Swagger, N.ohio vol and 11 others

In the video the coaches are actually saying words instead of just gutteral noises. Weird.
Likes: 99grad, basspond, SycloneJoe and 8 others

Wait...we seeing THREE QBs in practice, but, but, but I thought only one at a time...

Was hopeful HB would come out stronger but then agn, season just ended few months ago.

I just hope we are competitive against the elite teams and beat those we historically have (except past five years)- Ky, Vandy, South Carolina, ole Miss, etc
Likes: MemphisVol77

Got a feeling Jimmy Callaway will reach stud-like status this fall...
Likes: albedo33, headhunter15, Orange Swagger and 8 others

Defense of line? Lol
Likes: The Original Fade, gainesvol82, cobbwebb0710 and 2 others

I’m curious if Salter is going to see the field this spring.

I know Ramel Keyton opted out last year, and I haven’t heard about him hitting the portal. Interesting that we haven’t heard a thing about him. I wonder if he is still on the team.
Likes: SN-A-C Orange and cobbwebb0710

TrippieRedd said:
I know Ramel Keyton opted out last year, and I haven’t heard about him hitting the portal. Interesting that we haven’t heard a thing about him. I wonder if he is still on the team.
Click to expand...
Could of sworn I saw his number on indoor practice. Pretty sure he is still there.
Likes: doublej and TrippieRedd
R

Why is Jeremy Banks not at practice?

Think it was Price who said “clean up” earlier in the week. That could be medical or not. Anyone ask Price to clarify?

Maybe he’s cleaning up his room. Or maybe he’s participating in a citizen Ride Along program with UTPD or KPD. Maybe he’s on honeymoon with Officer Blondie. Possibilities are endless..
Likes: SockeyeVol