Vols card (and other memorabilia) collection

Sitting in the Bellagio

When i transferred from operations to loss prevention, one of my co workers gave me these

MyBloodRunnethOrange said:
When i transferred from operations to loss prevention, one of my co workers gave me these
View attachment 191687

Justin Harrell from the looks of it.
Likes: MyBloodRunnethOrange

I've got a few things. An unopened box of the "100 years of Tennessee Volunteers" cards from the early 90s. Autographed Bernie & Ernie pictures (the autographs are almost gone now. You can barely make them out.) I used to have a autographed Craig Puki jersey and an Autographed Carl Zander jersey. Not sure what happened to them.

Justin Harrell from the looks of it.
Click to expand...
Yes, it's Harrell
Likes: YankeeVol

508mikey said:
nice - do you display them ? -- Is the Troy Fleming like the CJ Leak one Yankeevol has posted in this thread ?
Click to expand...
How much for the Dickey Sugar Bowl Jersey?

YankeeVol said:
Where'd ya get the jersey?
Click to expand...
Guy in Knoxville off Ebay 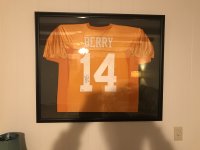 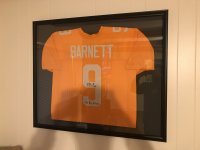 Put these guys up on sigining day
Likes: 508mikey, MyBloodRunnethOrange and Orange Sunset

There is a card show this Saturday from 10-4 at the Washington Pike United Methodist Church. Usually a decent little show with some nice UT stuff there. I've also started a trading group on Facebook called East Tennessee Card Collectors as well. Might be able to add some stuff there.

WR gloves from the AD

Click to expand...
Take a picture with someone wearing them to show the power T.

Iam4utalways said:
Take a picture with someone wearing them to show the power T.
Click to expand...

Click to expand...
I wanted to snag this one. Great pickup
Likes: 508mikey

Picked up a graded Deon Grant

huntin4bear said:
I have an autographed Peerless Price rookie card as well...that he signed in person for me and it looks nothing like the autograph on yours! WTH!!
Click to expand...
There are a lot of fake autographs out there, especially with high dollar ones like dead presidents and celebrities, but it's not uncommon for autographs of the same person to look different as well. One example that comes to mind is Devonta Smith. Leaf produces a set for the high school all-star game and each player autographs quite a few cards, like at least 100. Devonta Smith apparently rushed his and it's just a D with a scribble after it. But I saw a photo of a Bama fan holding up a ball signed by Smith with Smith sitting in the background, and Smith's autograph was written quite well in cursive, a dying skill for people in his generation. It was a stark contrast from the other Devonta Smith autographs.

Most if not all of the Devonta Smith items on Ebay are actually real signatures. devonta smith autograph | eBay On high end stuff, I don't buy anything that hasn't been certified by PSA/DNA or Beckett and even they're wrong too sometimes. 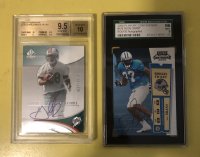 Actually had a 1977 Kelsey Finch #36 tear-away jersey he threw me after the Oregon St game. My sister wore it for "jersey day" at her HS homecoming week while I was in college. She left it in the locker room when she went to cheer practice......and it was never seen again.
Likes: 508mikey
New posts
You must log in or register to reply here.
<< Tennessee Vols Football Forum
Share: Facebook Twitter Email Link