Camped today and earned and offer.

“Martin, a re-classified 2022 prospect for Life Christian Academy in Virginia, added the offer on Friday. He was dominant during the Seminoles’ offensive line/defensive line camp on Wednesday, leading to the offer.

Martin was previously in the 2021 cycle, but at 17, re-classified to be among his age group. He’s a converted wide receiver who has grown into a 6-foot-5 frame and now carries a productive 290 pounds.”

290 lb former wide receiver? In before “move him to TE.”
Likes: Volfan1000 and SweetasSoda
V

“I was really excited number one and two I’m just extremely blessed. It was amazing,” Martin said of getting the offer. “They really love my size and athleticism. They really think I have the potential to play at the next level.

“It’s more physical, but it’s a great experience. Overall my caliber of physicality and athletic ability allows me to play that position,” Martin said of playing inside. “I have only played defensive end for about a year. Two years ago I was playing receiver. Over time and through quarantine I gained and maintained the weight.

“They really like me at both but they told me at the next level I could really make some good money on the inside.”

“I will be committing in December. Right now I’m just taking my time and enjoying the process,” Martin said. “I’m just asking as many questions as possible. Make sure my dad knows what’s going on and we just keep rolling.”

“I will be back after the dead period for an official visit,” Martin said. “I don’t plan on doing anything till December. I’m taking an official visit to Virginia Tech this month then the rest in the fall.”

With more miles to travel, more questions to ask and more offer likely coming, the class of 2022 prospect is just trying to soak it all in.

“It’s been exciting. I didn’t expect any of this at all to be honest," Martin offered. "My dad just told me to enjoy the process which is what I am trying to do, but it’s exciting. My thing right now is just focusing on playing ball. Do what I love to do and everything else will fall into place. I’m thankful for it.”
Click to expand...
-VQ
Likes: FïreBall, F0Rt_V0L, SweetasSoda and 5 others 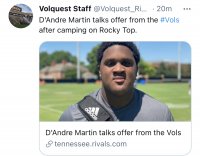 Ultra athletic interior DL seem to be the trend for this staff.
Likes: T Dog

Pacer92 said:
A dead ringer...
Click to expand...
three boys? 🤦🏼‍♂️ my man, Tee how are you not a distance athlete at this point? My 2 yr old boy was shot out of a slingshot.
Likes: Pacer92

OGbabyaviVol said:
100%. Spitting image. Definitely won’t be a Vol.
Click to expand...
I took it as, he gonna come here and win a Natty.

The 6-foot-3.5, 293-pound Martin, who’s originally from Durham, N.C., said Vols defensive line coach Rodney Garner informed him of the offer after working with him on the field Thursday morning during Tennessee’s camp.

“One of the coaches followed me prior to the camp,” Martin said. “But I really was just coming out here, really, just to work. I felt like, if (an offer) was meant to be, then it’ll happen. Thank God it did.

“I was excited, and I was just grateful to be able to have this type of offer.”

Martin said Garner “made it clear” that first-year Vols head coach Josh Heupel’s staff wants him at Tennessee after getting a firsthand look at him.

“They really love the athleticism and the size,” Martin said, “so that really kind of took it over the top for them.”

He said he enjoyed getting to work with Garner during the camp and getting to know Tennessee’s staff throughout the visit.

“They’re going to push you to the max. They want you to be better,” Martin said.

“Coach Garner is definitely the kind of coach that’s going to push you to that limit. He’s not laid-back, but he’s not excessive. He’s a great coach.”

Getting to see Tennessee’s campus in person also impressed Martin and made it easier for him to envision himself returning to Knoxville in the coming months to take another look at the Vols.

“It looked really good,” he said. “It was great. Gorgeous school. It looks like home.”

Martin said he’s not sure “right now” where Tennessee stands among the seven Division I schools that have extended offers to him. Virginia Tech, Florida State and Virginia all gave him offers between June 7 and June 14.

“I’m just grateful to be able to say I have those types of schools that have potential and see potential in me,” he said.
Click to expand...
-Callahan
Likes: SoilVol, 5FingerVolPunch, F0Rt_V0L and 9 others
V

If this guy plays as well as he speaks, I hope he decides to matriculate at Tennessee.

Add: Just watched the vid of Martin catching passes all over the field as a TE and WR. He must have been a little lighter then. He also made plays work with strong blocking. If he has enough muscle to play DL, he should have the speed and athleticism. Martin is not ranked, but I like this offer and wonder what those who know are thinking.
Last edited: Jun 20, 2021
Likes: SweetasSoda and volsfan_17

This kid looks exactly like Tee. Also.... how many children does Tee have??
Likes: allvolrecruiting

still going hard on him per vq no homo
Likes: PA Vol, Ryno14, Maxwell865 and 3 others
New posts
You must log in or register to reply here.
<< Tennessee Vols Recruiting Forum
Share: Facebook Twitter Email Link