colby making it more of a fight - good finish to the third round for him
Likes: Blake25p

getting good going into the last round
Likes: Blake25p

5th round going to be wild.

I say give them another round

Great fight, Usman clearly won. Nice to see them show respect after. Like the guys said the real Colby showed up there.
F

What have you done for the university?

Say what you want about Covington, but the dude is tough.

Usman retains, but that was a solid fight

Colby still has 0 relevant wins this decade. Maybe 2022 will be his year. Respect to him tho. He got saved by the bell and then made it into a hell of a fight.

Fun fight, I hate the pound for pound stuff with Usman though. If he really thinks that then go fight Izzy

mr.checkerboards said:
Fun fight, I hate the pound for pound stuff with Usman though. If he really thinks that then go fight Izzy
Click to expand...
They’re close friends, never gonna happen. No one in this division is beating him though. Colby by far is his biggest challenger.

mr.checkerboards said:
Fun fight, I hate the pound for pound stuff with Usman though. If he really thinks that then go fight Izzy
Click to expand...
How can you say he's not? He pretty much has dominated every fight he's been in. He wins almost all the rounds. Not only that, he fights a lot as champ. When is the last time you seen a champ fight three times in the same year? He won the belt and defended 5 times in a 3 year span. I hate him too but I'm not blind.
Last edited: Nov 7, 2021

Blake25p said:
They’re close friends, never gonna happen. No one in this division is beating him though. Colby by far is his biggest challenger.
Click to expand...
They're not close friends, even so, money makes enemies. They both have this weird love for a flag even though neither have spent much time under its representation. Usman is an American fighter trained in wrestling from Texas. Adesanya is a New Zealand trained kickboxing fighter from Auckland. They call it some kind of bond black dudes born in Africa raised in better places develop. These guys are as much Nigerian as I am European. Notice neither one have even a slightest hint of an African accent? You would think if they loved that nation so much they would go back and invest in making it a better place, but nahh they will continue to live and spend their money in the US and New Zealand. /rant lol

Chimaev will be his toughest challenge, and probably his next fight. If Edwards beats Masvidal then Chimaev vs Edwards will setup Usamns next opponent (Chimaev vs top 5 regardless of Masvidal fight). I don't expect Usman to fight for a while, he just fought 3 times in '21. Chimaev might fight again before the top 5 (Edwards) fight. I can see them giving him someone like
Ponzinibbio, Muhammad, or a Diaz for the money draw.
Last edited: Nov 7, 2021

clarksvol00 said:
I hadn't thought about it that way, but a lot of the, "if you're susceptible, stay home and let me pretend covid isn't real" crowd sure are looking for sympathy now.
Click to expand...
n_huffhines said:

Click to expand...
I'm not a big fan of Usman's personality or some of his older fights, but he's a machine. I agree he's P4P #1.

Ttucke11 said:
I'm not a big fan of Usman's personality or some of his older fights, but he's a machine. I agree he's P4P #1.
Click to expand...
Yeah, I couldn't stand him when he was a lay n pray wrestler, but he's knocking dudes out now all the time. He's not boring in the octagon anymore. I barely even notice a personality, so not sure what's not to like.

As for the pound for pound stuff, maybe he will go up and fight Izzy, but not fighting Izzy doesn't mean he's not best lb4lb. Izzy's #3 in the lb4lb rankings and Jan smashed him pretty good, and he's not even a great LHW.
Likes: Ttucke11 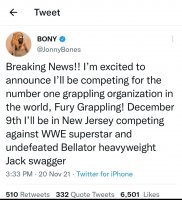 Jon Jones. SMH. Speaking of dopers, anyone give any credit to the stories of Usman juicing?