The 6-foot-5, 284-pound Kutas said he “mostly” stayed in contact with Elarbee, but he has spoken with new Tennessee running backs coach Jerry Mack “a couple times over the phone.” Kutas said he has also exchanged some text messages with Heupel.

A two-way lineman who’s being recruited by the Vols to play on the offensive line, Kutas said Tennessee is one of the teams recruiting him hardest, along with Virginia Tech, Oregon, Illinois and Arkansas. He admitted he’s pleasantly surprised that the Vols’ new staff is talking with him so frequently.

“It’s pretty crazy to me,” Kutas said. “I mean, it’s good to know that I am a priority to them and that they think highly of me.”

He said he had a Zoom conference with Tennessee last week that included a virtual tour of UT’s campus and allowed him and his parents to get to know Heupel’s staff.

“We did (the virtual tour), and then I talked to a couple of the coaches for a while,” Kutas said. “I just got to see the facilities, the ins and outs of it — the weight room, the locker room, even the little restaurant they have at the bottom. That was pretty neat to me, just to get a feel for it, even if it’s not in person.

“They got to talk to my parents a lot and get to know them pretty well — which, I liked that, too.”

Elarbee in particular has made a good impression on Kutas so far.

“I mean, he’s a guy that wants to help me get better,” Kutas said. “We’ve watched some film together. He’s just a down-to-earth guy.

“They think I’ve got a high ceiling, and he likes the athletic guys, like D-ends or tight ends, that can move to offensive tackle because they can just move so much better.”
Click to expand...
-Callahan
Likes: lfvol, Vol Main, Volfan1000 and 16 others

Return of The Tough Guy

I Will Give My All For Tennessee Today!

I will say with the new staff they seem to contact recruits they want almost everyday, which is great, showing these kids they are priority...GBO
Likes: Woodlawn VOL, wwilso29 and bigorange6469

Volnation is my gaggle

Speaking of Notre Dame and Christian Brothers, it will be interesting to see if the Irish enter the mix for Patrick Kutas. Tennessee and Coach Glenn Elarbee have done a really good job of building momentum in relationships over the last month. Tennessee seems to be firmly entrenched in this one.
Click to expand...
-VQ
Likes: Woodlawn VOL, Megatron88, #1GatorHater and 23 others
O

If Arkansas is recruiting him as an OL, he is definitely a take for us. Sam Pittman knows linemen.
Likes: Megatron88, #1GatorHater, LittleVol and 7 others

"I’m not sure about an official (to Tennessee) yet — most likely later," said Kutas, who's ranked the No. 580 overall prospect in the 2022 class and the No. 21 junior from the state of Tennessee, according to the industry-generated 247Sports Composite.

"But I’m trying to official to the places further away from home right now."

A two-way lineman who's being recruited by Tennessee as an offensive lineman, Kutas said he's still talking with the Vols multiple times per week. He said he mostly hears from Tennessee offensive line coach Glen Elarbee, but he also stays in contact with first-year head coach Josh Heupel on a weekly basis.

Last month, Kutas said Elarbee had made a good impression on him since Heupel's hiring in late January.

“I mean, he’s a guy that wants to help me get better,” Kutas said at the time. “We’ve watched some film together. He’s just a down-to-earth guy.

“They think I’ve got a high ceiling, and he likes the athletic guys, like D-ends or tight ends, that can move to offensive tackle because they can just move so much better.”
Click to expand...
-Callahan
Likes: #1GatorHater, F0Rt_V0L, Kristy* and 4 others

This kid a silent, waiting for green light, or just a fan? He’s very pro-UT.
Likes: OrangeMound and PA Vol

NormalVol said:
This kid a silent, waiting for green light, or just a fan? He’s very pro-UT.
Click to expand...
He legit posts nothing but graphics sent to him from every team.
Likes: VolByLaw

Kutas will be a Vol... blocking for Dallan Hayden.
Likes: onevol74, T Dog, SweetasSoda and 3 others

PA Vol said:
Just commit already.
Click to expand...
It’s nothing special for us. He constantly is tweeting graphics from other schools
Likes: VolByLaw

OT PATRICK KUTAS
Kutas, a two-way lineman from Christian Brothers High School in Memphis, received an offer from Tennessee in January during the coaching search that resulted in Heupel’s hiring. He never seemed to draw serious interest from the Vols’ former staff, but that quickly changed under Heupel. Tennessee has made Kutas a priority on the offensive line over the past few months, and the Vols are one of more than a half-dozen contenders for him. Oregon, Illinois, Arkansas and Louisville might be Tennessee’s main competition for Kutas at the moment, according to sources, with Florida State and Virginia Tech also still in the running. Kutas has started to develop a strong relationship with Elarbee and also has been in contact with running backs coach Jerry Mack in addition to Heupel. It's worth noting that the Vols aren't scheduled to host Kutas on an official visit, but he plans to make it to Knoxville on an unofficial visit next month, and he hasn't ruled out using his fifth and final official visit to return to Tennessee this season.
Click to expand...
-Callahan
Likes: Kristy*, BigOrangeGoose, SweetasSoda and 11 others
S

“(I talk with) just a bunch of the dudes from there,” Kutas said of Tennessee. “And then I’ve had a couple commits and a couple players from their team that hit me up. ‘Big O’ — Omari (Thomas) — he hit me up, (and) the quarterback commitment, Tayven Jackson, and then the other commit (Brody Foley) from Cincinnati.”

A two-way lineman who’s being recruited by the Vols as an offensive lineman, Kutas said he has been to Tennessee’s campus once before, although it was several years ago. He said he’s looking forward to visiting the Vols, and he’s interested in them for multiple reasons.
“They’re close. They’re kind of, like, not really the home team, but close enough to be like, you’re still with Tennessee,” he said. “I know they have a lot of players that come from the Memphis area that do well, so it’s kind of just that connection, and I think their coaching staff right now, they’re on to something.”

His proximity to Tennessee is one of the main reasons he decided to schedule official visits to four other schools next month rather than using one of them to travel to Knoxville. But he said the Vols still might host him on his fifth and final official visit.
Click to expand...
247
Likes: Kristy*, BigOrangeGoose, SweetasSoda and 5 others

Grant, Kutas, Morgan, Nichols, and Anderson. Take those 5 and be done.
Likes: xston, SweetasSoda, PA Vol and 4 others

TrippieRedd said:
Grant, Kutas, Morgan, Nichols, and Anderson. Take those 5 and be done.
Click to expand...
We are in a great position with Mo Clipper. I think we will land him. Going to be a big OL class either way
Likes: Woodlawn VOL, ThreatLevelOrange, SweetasSoda and 4 others

TrippieRedd said:
Replace Morgan with him then. Like you said it will be a big OL class. It says Clipper is 6’4, maybe he can play guard.
Click to expand...
Yeah, Clipper is going to be a guard in college. Very underrated player. Plus, he has ties to LT Overton. Probably won't land Overton but it does not hurt
Likes: T Dog and TrippieRedd 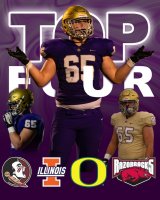