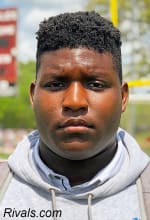 
2021 lineman Evangelical Christian Dietrick Pennington is going to be a DUDE in next year’s class. He plays offensive and defensive tackle but will likely end up at OT in college. Don’t be surprised if he becomes a Top-250 recruit next year. He visited Tennessee last month and will be back this summer. Alabama stopped by the school recently. He has early offers from UT, Arkansas, Ole Miss and Memphis.
Click to expand...
-VQ
Last edited: Jul 10, 2019
Likes: SweetasSoda, nicksjuzunk, I4Vols and 9 others

Price raved about this kid on podcast... compared him to Trey Smith...huge and put together, not sloppy at all. He was here recently and visiting again soon. Said Bama is on him too, going to be highly recruited kid next year.
Likes: nicksjuzunk, VOLSONLY, SweetasSoda and 5 others

Pennington (6-foot-5, 310 pounds), from Evangelical Christian in Cordova is holding an early offer from the Vols and has already gotten plenty of attention from the staff.

“Tennessee came by my school a couple of time this spring. They’ve been talking to me about getting to some camps this summer. I might come in June,” Pennington said of the Vols’.

“I really like the facilities there and the people around the program. I like the coaches there. I primarily talk to Coach (Tracy) Rocker. He’s a good guy. We talk about things that I can work on on the field. I feel like I can talk to him about anything or if I need help with something.”

A mammoth prospect who plays both ways in high school, Pennington could project on either side of the line of scrimmage at the next level. Tennessee’s pursuit to this point seems to be focused on the defensive side, as evidenced by Rocker taking the lead in his recruitment.

Pennington, who’s also holding early offers from Arkansas and Ole Miss, recently participated in NIKE’s The Opening regional event in Murfreesboro where he was one of the standout performers.

He worked with the defensive line at the event and relished the opportunity to go up against some of the best offensive line prospects in the South.

“Sure, you get amped up going against the kind of guys that are here. I love going up against the best guys,” he said of the opportunity.

"When I first start out, since we go two times in a row, I give it all I’ve got the first time to see what they do and then build off of that. If they do the same thing then I know what I want to do to counter them. “Since I play both ways it also shows me how I can work on my offensive game as well.”

The chance to go against top-flight competition was something that Pennington appreciated and something he feels like is going to help him in his development as a player.

“It’s great because it really helps to show where you’re at when you’re going against some of the best guys in the country,” he said. “It helps to show me things I need to work on, especially with the coaches giving you the kind of feedback you get. Like today they told me I wasn’t flipping my hips enough. I would come off the ball really well and then get stuck because I’m not flipping my hips.”
Click to expand...
-VQ
Likes: FïreBall and T Dog

Well obviously we are looking at the right kind of players and Identifying them early. So we just have to hope the staff can hold off clemson this time next year. Hopefully an improved W/L record will show this kid and others we are on the right track and he jumps onboard.
Likes: VOLSONLY

Class of 2021 lineman Dietrick Pennington of Evangelical Christian School in Cordova, Tenn., received an offer from Tennessee more than seven months ago, and he already seems to have established himself as one of the Vols' top in-state targets in the 2021 class. He attended camps last month at Clemson and Georgia, which already had extended an offer to him, and he added an offer from the Tigers during his visit to Clemson.

Tennessee and Georgia are among the teams that already have showed him plenty of attention, and the Vols got to see him again during last month's Big Cat Mega Camp at Memphis, where running backs coach David Johnson was among the Tennessee coaches in attendance. The Vols appear likely to remain legitimate contenders for the 6-foot-5, 326-pound Pennington, who's being recruited by most teams as an offensive lineman but also has some interest in playing on defense.
Click to expand...
-Callahan
Likes: VOLSONLY, JustSomeVolFan, Orangeredblooded and 8 others

I wonder if Jeremy Banks knows him... or Jerome Carvin...
Likes: VOLSONLY

Somebody drop the info, please. ^^
V

SLICKYINC said:
Somebody drop the info, please. ^^
Click to expand...
Looks like another Tray Smith to me . Really big thick kid .
Likes: VOLSONLY

I think he's got a bad ass name. Hope we get him

SLICKYINC said:
Somebody drop the info, please. ^^
Click to expand...
Vols after him hard. Huge priority.

Everyone else after him hard. Huge priority.

Doesn’t plan to commit until after his senior year.
Likes: VOLSONLY, Pane di mais, HoleInTheRoof and 1 other person

Look at my shocked face

Adding this one to my watchlist right now. Thanks.
Likes: VOLSONLY, BucksnortVol, T Dog and 3 others

Pane di mais said:
Adding this one to my watchlist right now. Thanks.
Click to expand...
This kid, Tray Curry, and Andre Turrentine I say will be Vols, and a nice little in sate haul right there already. (If we get them, but I think we will)
Likes: VOLSONLY, T Dog, Bassmaster_Vol and 1 other person

yeah, it's for kids like this that i'm glad we've got the track record we do in W TN now. these are the types we want to keep.
Likes: ALLVOL24/7/365